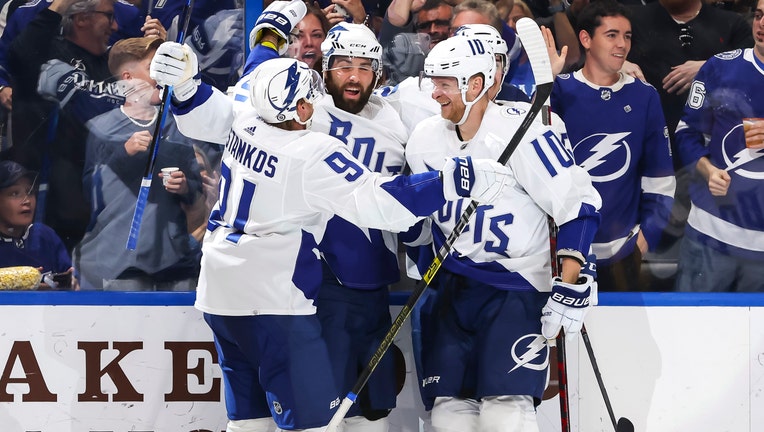 TAMPA, FL - APRIL 23: Pat Maroon #14 of the Tampa Bay Lightning celebrates a goal with teammates against the Nashville Predators during the third period at Amalie Arena on April 23, 2022 in Tampa, Florida. (Photo by Mark LoMoglio/NHLI via Getty Image

Hedman became only the second defenseman in franchise history to score 20 goals in a season, joining Dan Boyle, who did it in 2006-07.

"I just aimed for the stars and hit it as hard as I could," Hedman said of his blast from the high slot.

"Balanced scoring — it’s pivotal and if you want to go anywhere in the playoffs you need more than a couple of guys scoring," Lightning coach Jon Cooper said. "I look at the guys that have 20 or more (goals) or close to 20, and it’s a big reason for our success."

The two-time defending Stanley Cup champs have tightened up their defense in their past two games, both wins. Combined, the Lightning outscored the Toronto Maple Leafs and the Predators 14-3 and didn't allow an even-strength goal.

"If we are going to do anything, we have to look after our own end," he said. "I love our (goaltending) tandem, but I don’t care who’s in net. If you’re not defending, they can only do so much."

Tampa Bay is three points ahead of the Boston Bruins in the race for third place in the Atlantic Division. The Bruins defeated the New York Rangers 3-1 earlier Saturday.

Nashville is tied with Dallas for the two wild-card spots in the Western Conference due to the Predators' loss and the Stars' 3-2 win against the Seattle Kraken on Saturday. Both teams have 93 points, though the Predators have a game in hand. The Vegas Golden Knights are four points behind Nashville and Dallas.

"It’s definitely not on my mind tonight," Josi said of the milestone. "We’re in a playoff hunt and it was a disappointing night for us. Sometime I’ll look back at this and be happy, but tonight was a disappointment with the way it ended and the way we played."

Saros allowed six goals on 30 shots before being replaced by David Rittich after Colton and Pat Maroon scored 31 seconds apart early in the third period. Rittich made eight saves.

The first period was full of goals. Hedman beat Nashville goalie Juuse Saros just 1:51 into the game, and Cirelli beat Saros on a breakaway at 10:59 to make it 2-0.

Josi’s goal, his 21st of the season, came with about three minutes left and cut the margin to 2-1. But Kucherov made it 3-1 when he beat Saros with a wrist shot with 20 seconds remaining for his 21st goal. Kucherov has five-game point streak and goal streak.

Carrier’s third of the season at 10:42 of the second period made it 3-2, but Stamkos one-timed a feed from Kucherov past Saros at with six minutes left for a 4-2 lead.

"That was a really nice play," he said. "It was a turnover, and when you give those guys, with that skill level, a chance against an unorganized defense — they made a play and that was a big-time goal."

Colton deflected Hedman’s shot into the net at 1:37 of the third period, and Maroon celebrated his 34th birthday by scoring at 2:08.

The Predators and Lightning, who wore customized jerseys when they met Feb. 26 in the NHL Stadium Series at Nissan Stadium in Nashville, wore those same uniforms Saturday.

The Lightning are 9-2-0 in their last 11 games against Nashville.

The Lightning honored longtime Predators broadcaster Terry Crisp, who was Tampa Bay’s coach when the franchise entered the NHL in 1992 and is retiring after this season.

Crisp coached the first 391 games in Lightning history until he was fired early in the 1997-98 season. He has covered the Predators as a TV analyst and studio host since they entered the NHL in 1998.