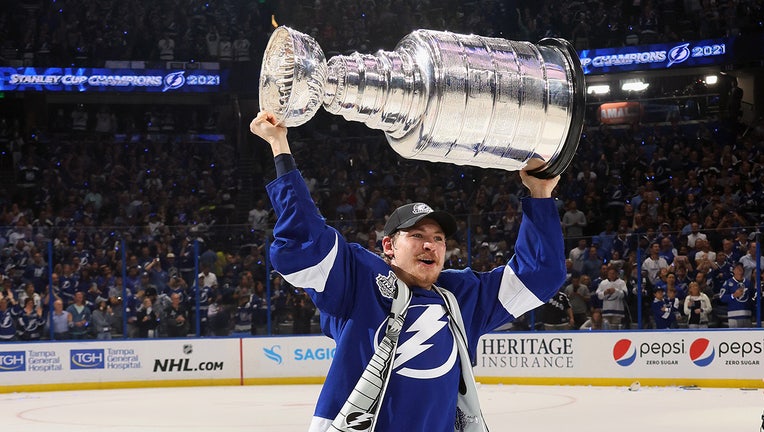 TAMPA, FLORIDA - JULY 07: Yanni Gourde #37 of the Tampa Bay Lightning celebrates with the Stanley Cup following the victory over the Montreal Canadiens in Game Five of the 2021 NHL Stanley Cup Final at the Amalie Arena on July 07, 2021 in Tampa, Flor

TAMPA, Fla. - Yanni Gourde played an important part in the Lightning’s back-to-back Stanley Cup victories, but following the win, he was one of the unprotected players for the NHL expansion draft.

On Wednesday night, the Seattle Kraken officially announced they will take the Tampa Bay forward but Gourde will miss at least the first month of the season following shoulder surgery.

Following the announcement, the Bolts sent a tweet to thank Gourde for being a spark plug on the team.

"Your heart, passion and energy were unmatched. The last six years would not have been the same without you. Thank you, Yanni. You guys got a good one, @SeattleKraken."

The cap in the NHL remains a flat $81.5 million because of pandemic revenue losses across the league, and there’s little cushion for a contender even this deep to pony up to bring the band back together for Tampa Bay.

Longtime forward Tyler Johnson was put on waivers last fall when it looked like they needed to clear salary-cap space, and general manager Julien BriseBois paid the price of a second-round pick to dump salary in late December.

Then star forward Nikita Kucherov discovered he needed hip surgery, the rehab of which would cause him to miss the entire 56-game regular season that was squeezed into four months. It was a major loss but also one that allowed Tampa Bay to stash his $9.5 million cap hit on long-term injured reserve and put a playoff-worthy team on the ice.

Salary cap gymnastics also allowed Tampa Bay to add David Savard at the trade deadline, and the rugged defenseman who had never won it all before set up rookie Ross Colton’s winning goal in the Cup clincher.

The newly-formed Seattle team will make its debut in Las Vegas in a matchup of the league’s two newest teams in mid-October and play its first home game on Oct. 23 against rival Vancouver.

Of the 30 players selected, Seattle committed only $54 million of a possible $81.5 million, not including a few restricted free agents who will push the number closer to $60 million should they stay.

The side deals and trades that Vegas fleeced the league with four years ago were absent this time around. Vegas announced 10 trades during its expansion draft; Seattle, zero.

Defense was clearly a priority for Seattle, whether to build its own depth or for the opportunity to flip players for other options. A few seem locks to stay, like Adam Larsson and Jamie Oleksiak, both unrestricted free agents who signed long-term deals with Seattle. Larsson got a $16 million, four-year deal, and Oleksiak got $23 million over five years.

Veteran Mark Giordano from Calgary was thought to be a possible option for flipping but seemed unlikely when he walked on stage and pulled on the Kraken home jersey.

Giordano, 37, has the biggest cap hit of any player taken but could soon wear the captain’s "C" when they open their inaugural season.

As far as other players selected, the Kraken got their goaltender in late-blooming Chris Driedger, and veteran forwards Jordan Eberle and Jared McCann.

Seattle passed on big-money goaltender Carey Price, who was fresh off backstopping Montreal to the Stanley Cup Final, choosing instead to sign Driedger to a $10.5 million, three-year contract. The 33-yearold Price has a cap hit of $10.5 million — annually — and a questionable injury history.

Seattle also took goalies Vitek Vanecek from Washington and Joey Daccord from Ottawa. Driedger and Vanecek combine to cost less than half of Price.

Seattle had the Stanley Cup once before, in 1917, when the city’s team was the Metropolitans.