What the stats say about Florida’s coronavirus spike

COVID-19 case and infection rates are soaring. The data points continue to indicate an acceleration of community transmission in Florida. It’s not just an increase in testing; states to our north have also expanded testing and their numbers are going down.

The Bolts join the Tampa Bay Buccaneers, the Philadelphia Phillies, and the Toronto Blue Jays as sports teams based or training in the Bay Area with cases of the virus.

In a statement on Twitter, Lightning general manager Julien BriseBois said the players were who tested positive had low-grade fevers but were otherwise asymptomatic. They were self-isolating and following guidelines from the Centers for Disease Control.

"The Lightning continue testing and are strictly following all NHL and government procedures as part of the league's Phase 2 guidelines," BriseBois' statement said. 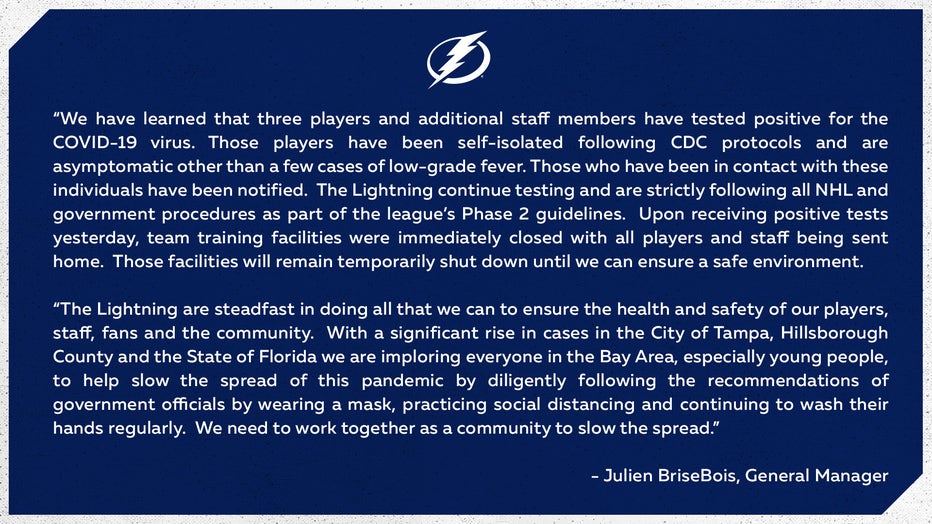 After the team was notified of positive tests Thursday, they closed the team training facilities until "we can ensure a safe environment," BriseBois said.

Earlier this week, the University of South Florida Bulls confirmed student-athletes had tested positive after the first week of voluntary on-campus athletic activities.