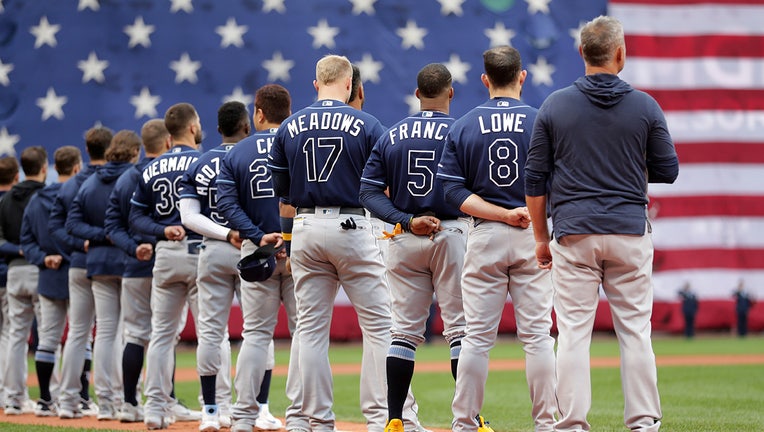 BOSTON - The Boston Red Sox may seem to have the momentum right now, but it’s not over for the Tampa Bay Rays.

Boston beat Tampa Bay 6-4 in 13 innings on Christian Vazquez’s walk-off, two-run homer. The Rays had a chance to score in the 13th inning of the third game in the ALDS, but a fluke play on Kevin Kiermaier’s long ball stranded him at second base, and kept Yandy Diaz from scoring. The bounced off a wall, off the Red Sox infielder and into Boston’s bullpen.

The umpires reviewed the play and called it a ground-rule double, sending Diaz back to third and giving the Red Sox the opportunity they needed to close out the game.

The Rays summed up the hard-fought game on Twitter with a simple angry emoji while sharing the final score. It was a disappointing end, but Rays fans are confident the team will pull through.

Hundreds of Rays fans gathered Sunday night to cheer their team from afar.

"They’re humble, you know?" said Carolyne Weber, a Rays fan. "They have fun playing together, and it’s infectious, the amount of fun they have on the field."

"You try to follow what they’re doing, they do something new," said Myir Goodspeed. "It’s like OK, I’ve watched all 162 games, so they’re going to use this pitcher, and then it’s someone totally different, and then it works, it’s crazy."

Now, Tampa Bay faces a must-win Monday night. The pivotal Game 4 will be in Fenway Park, starting at 7:07 p.m.

Rays fans can cheer them on at two different watch parties: the Tampa Theatre and the St. Pete Pier. There will be swag giveaways and opportunities to play games and win prizes.

If they win, they’ll force a Game 5 back at the Trop, but they have to get through Monday night first.