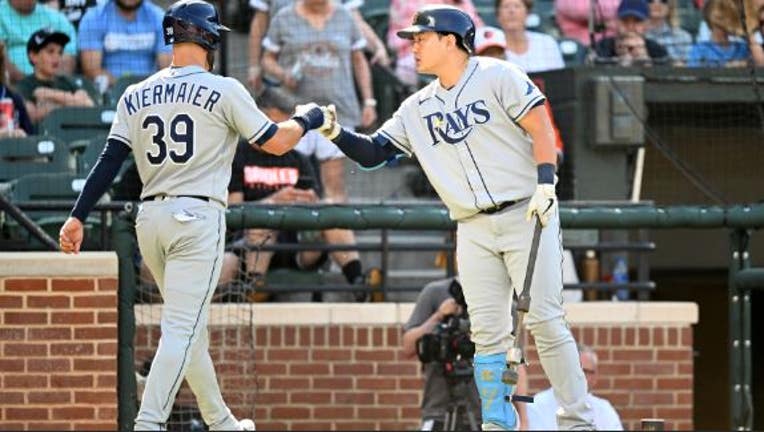 BALTIMORE, MARYLAND - JUNE 18: Kevin Kiermaier #39 of the Tampa Bay Rays celebrates with Ji-Man Choi #26 after scoring in the third inning against the Baltimore Orioles at Oriole Park at Camden Yards on June 18, 2022 in Baltimore, Maryland. (Photo by

It was just enough to end their four-game losing streak.

Ramirez hit a tiebreaking sacrifice fly in the top of the ninth inning, and the Rays beat the Baltimore Orioles 7-6 on Saturday. Tampa Bay had scored only four runs in its previous four games, but the Rays broke through with 14 hits in this one.

"Baseball works in very mysterious ways, and it just seems like everything that could go wrong this last week has for us," Tampa Bay outfielder Kevin Kiermaier said. "Just keep trying to let all these guys in here know that we got a lot of season left, we got a lot of talent in here."

Mejía had a career-high four hits for the Rays and Yandy Díaz had three.

Díaz also drew a one-out walk off Dillon Tate (0-3) in the ninth. Ji-Man Choi followed with a single and Tate hit Randy Arozarena with a two-strike pitch to load the bases.

Ramirez's fly to right put the Rays ahead. Colin Poche pitched the bottom of the ninth for his fourth save.

Calvin Faucher (1-1) pitched a perfect eighth to earn his first career win, the day after taking the loss in

Robinson Chirinos had three hits and four RBIs for the Orioles.

"Today, I figured out something in the cage today, and I think it’s going to make a difference in my season," said Chirinos, who was in the lineup while rookie catcher Adley Rutschman had the day off. "So that was good to see that in the cage and see the results in the game right away."

Choi hit a two-run homer in the fifth inning to give the Rays a 6-2 lead, but the Orioles rallied. An RBI single by Ryan Mountcastle in the fifth chased Tampa Bay starter Jeffrey Springs, and Chirinos hit a bases-loaded dribbler that snuck through into right field for a two-run single off reliever Matt Wisler.

Baltimore tied it in the sixth with the help of a two-out error by shortstop Taylor Walls on Trey Mancini’s slow grounder. Mountcastle followed with a walk and Anthony Santander drove in a run with a single.

Baltimore rookie Kyle Bradish allowed six runs on 11 hits in 4 1/3 innings. With the Orioles up 2-0, he allowed four straight hits to start the third. Manuel Margot and Ramirez each hit a two-run double that inning.

"A game like today was much needed," Choi said through a translator.

Springs allowed four runs and seven hits in 4 1/3 innings. Chirinos opened the scoring with a two-run double in the second.

The Rays were swept by the AL-East leading Yankees before this series against Baltimore. Even after Saturday's win, Tampa Bay trails New York by 13 games and is a game behind second-place Toronto.

"If there's any team who can make runs and do crazy things, it's us," Kiermaier said. "This game is so hard, it's so difficult, and I'll go to battle with any of these guys in here, seven days a week. We're getting the work in, we're doing everything. We need to just be a little bit more consistent — easier said than done."

Rays: Kiermaier (calf, Achilles) returned after a two-game absence. He singled and scored in the third.

Orioles: RHP Joey Krehbiel (shoulder) returned from the injured list. He retired his only two batters in the seventh.

Tampa Bay sends Corey Kluber (3-3) to the mound in the series finale against Jordan Lyles (4-5) of the Orioles.