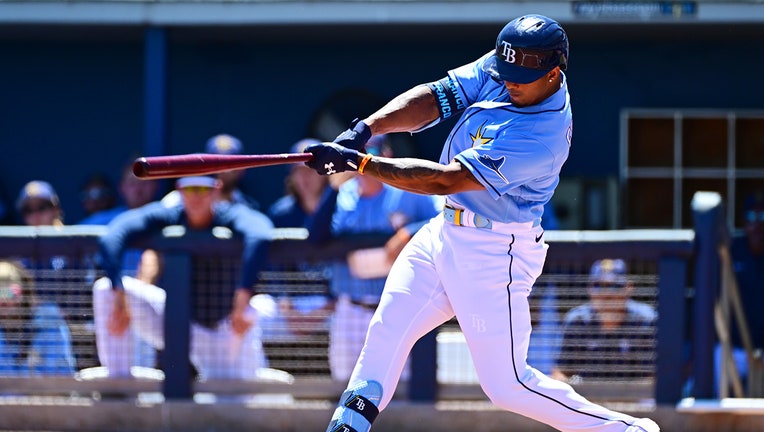 Wander Franco #5 of the Tampa Bay Rays hits a ground ball in the first inning against the Minnesota Twins during a Grapefruit League spring training game at Charlotte Sports Park on March 29, 2022 in Port Charlotte, Florida. (Photo by Julio Aguilar/G

LAKE BUENA VISTA, Fla. - After their Port Charlotte facility was damaged by Hurricane Ian, the Tampa Bay Rays will be heading to the most magical place on the planet for spring training.

Tuesday, the team announced they will split their time between Tropicana Field and ESPN Wide World of Sports Complex at Disney for the upcoming spring training season. They will then move their major league operations to St. Petersburg, while minor league workouts and games will continue at the stadium on Disney’s property.

Major League Spring Training workouts run from Feb. 6 through March 1 with early arrivals reporting on February 6. Pitchers and catchers will report the following week on Feb. 14.

The Rays are no strangers to this facility. In 2007, they played three regular-season games here and swept the Texas Rangers. A year later, the Rays played a three-game series against the Toronto Blue Jays and won each game, improving their record to 6-0 all-time at Walt Disney World Resort.

"We are thankful for Disney’s willingness and ability to accommodate our unexpected Spring Training needs," said Rays team president Matt Silverman. "ESPN Wide World of Sports Complex will provide our players and coaches with first-class facilities for their annual ramp up to the season."

The Atlanta Braves did spring training at the Disney complex for 21 years before relocating in 2019 to CoolToday Park in North Port, Florida, which is also on Florida’s Gulf Coast.

Charlotte Sports Park has been Tampa Bay’s Spring Training home since 2009, but in early December, Charlotte County and the Rays announced there wasn't enough time before spring training to get the park ready for hosting games.

"We are all disappointed for the residents of Charlotte County and the fans there," a joint statement read. "The community is in the thoughts and hearts of the Rays, and the team will continue to support recovery efforts."

The Rays and Charlotte County said they do plan on developing a restoration plan for Charlotte Sports Park in the coming weeks.