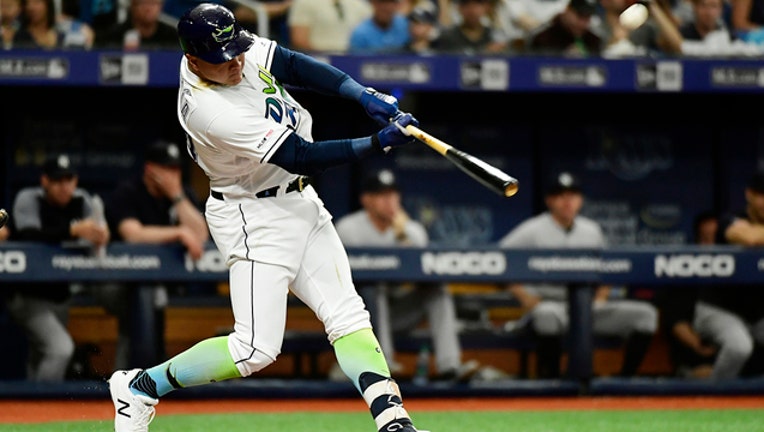 Yandy Díaz homered twice and drove in four runs for the Rays, who reopened a 1½-game lead over the Yankees.

Voit was hit by Chirinos (5-1) one batter after DJ LeMahieu's tying solo homer. Although there was no on-field incidents after Voit was hit, Yankees starter CC Sabathia went to the top of the Yankees dugout and yelled toward Tampa Bay players.

In his final start last season, Sabathia was ejected at Tropicana Field and given a five-game suspension for hitting Jesús Sucre with a pitch after Rays pitcher Andrew Kittredge threw a pitch behind Austin Romine.

Jonathan Holder (2-1) was warming up in the Yankees bullpen during the top of the sixth preparing to come in for Sabathia, who gave up two runs, three hits and four walks in five innings.

Avisail García greeted Holder with a single and advanced to third on a stolen base and a throwing error by Gary Sánchez, whose seven errors are the most among big league catchers. LeMahieu, a Gold Glove infielder, could not get his glove down to receive the throw.

Guillermo Heredia walked, and García scored on Adames' single to LaMahieu, who was shifted to the shortstop side of second base. LaMahieu made a sliding backhand on the outfield grass, but the ball popped into the air as he tried to throw. The left-handed-hitting Choi followed with a bouncer to LeMahieu in short right field, and beat the second baseman's one-hop throw. Heredia kept running and scored from second on the hit as the ball bounced away from Voit at first.

With the Yankees' bullpen short after being used extensively the previous two days, manager Aaron Boone brought in Nestor Cortes Jr. in the seventh, the 36th player and 17th pitcher used by New York this season. The 24-year-old left-hander gave up a three-run homer to Díaz in the eighth.

García homered in the second and Díaz added a third-inning shot off Sabathia, who has allowed eight homers over 30 1/3 innings in six starts.

Clint Frazier hit an RBI double in the fifth, when Michael Tauchman into an inning-ending double play with runners at the corners.

Tommy Pham made two catches on one play in the fourth inning. The Rays left fielder caught Brett Gardner's fly ball and then used his bare hand soon after to grab a contact lens that popped out.

Rays: RHP Tyler Glasnow (6-1), who left his start Friday night in the sixth inning, is expected to miss four to six week with a right forearm strain. Glasnow will not throw for seven to 10 days.