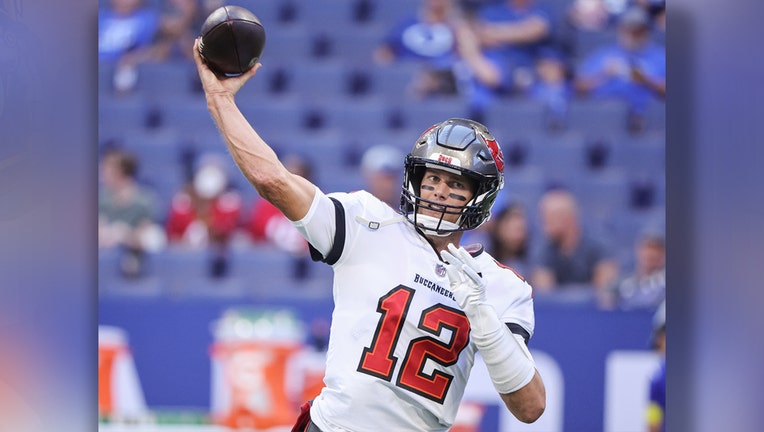 INDIANAPOLIS, IN - AUGUST 27: Tom Brady #12 of Tampa Bay Buccaneers warms up before the game against the Indianapolis Colts at Lucas Oil Stadium on August 27, 2022 in Indianapolis, Indiana. (Photo by Michael Hickey/Getty Images)

He's not rusty at all.

Five days after ending a planned, 11-day training camp break, Brady went 6 of 8 for 44 yards in the no-huddle offense and led the Buccaneers to a field goal on his first and only drive before watching the Indianapolis Colts' backups rally for a 27-10 victory on Saturday night.

In his first interview since returning to practice Monday, Brady did not elaborate on why he needed time off. He used a profanity while saying there are many things he must deal with at age 45.

First-year coach Todd Bowles wanted to give Brady about 10 snaps.

It wasn’t just Brady under the microscope in this preseason finale. 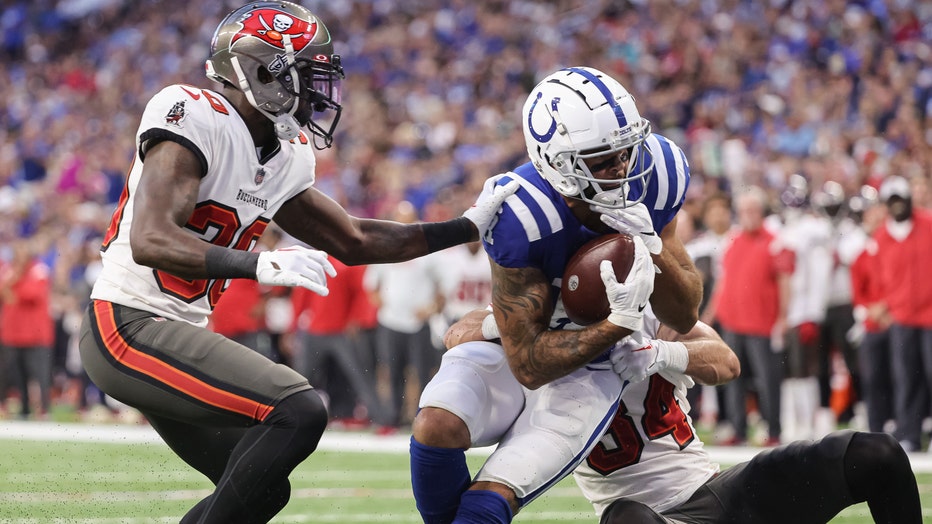 INDIANAPOLIS, IN - AUGUST 27: Michael Pittman Jr. #11 of Indianapolis Colts is tackled by Nolan Turner #34 of Tampa Bay Buccaneers during the first half of a preseason game at Lucas Oil Stadium on August 27, 2022 in Indianapolis, Indiana. (Photo by M

Receivers Mike Evans and Julio Jones and running back Leonard Fournette all played, though they, like Brady, watched the final 55 minutes from the sideline.

"If you go up-tempo in the preseason, teams are less likely to pressure you," Bowles said. "You’re able to get everybody involved early. We wanted everybody to get a good feel for the game and get in sync."

Indy played most of its starters about one quarter and Matt Ryan, the 2016 MVP with Atlanta, led the Colts to the go-ahead score — a 1-yard TD run by Deon Jackson — on his final series before taking a seat in his first home appearance at Lucas Oil Stadium.

"Good finish to the preseason," Indy coach Frank Reich said. "We wanted to come in here and accomplish some things. We saw some things we wanted to see, got guys out."

Without Brady, though, the Bucs didn't stay in front.

"I’ve known Tom for a long time and I’m always impressed with his consistency, his dedication to take care of himself, it’s amazing," Ryan said. "He’s throwing it as good as he ever has and to me that’s incredibly impressive."

Center Robert Hainsey (left ankle) and guard Nick Leverett (shoulder) left early and did not return. Bowles said both would have X-rays in the next two days but declined to speculate how much time, if any, they might miss.

Hainsey started Saturday in place of injured Pro Bowler Ryan Jensen, who was carted off the practice field on the second day of training camp. The Bucs also need replacements for recently retired Pro Bowl guard Ali Marpet and guard Aaron Stinnie, who has a season-ending knee injury.

Backup safety Armani Watts looked as if he might win a spot on the Colts' 53-man roster — until injuring his right ankle on Saturday's opening kickoff. Watts was eventually carted off the field and did not return.

"It’s an ankle injury that’s going to keep him out for the year," Reich said. "He’s going to have to have a procedure done. I don’t want to confirm all the details but it was a pretty significant injury."

Buccaneers: Open the regular season at Dallas on Sept. 11.