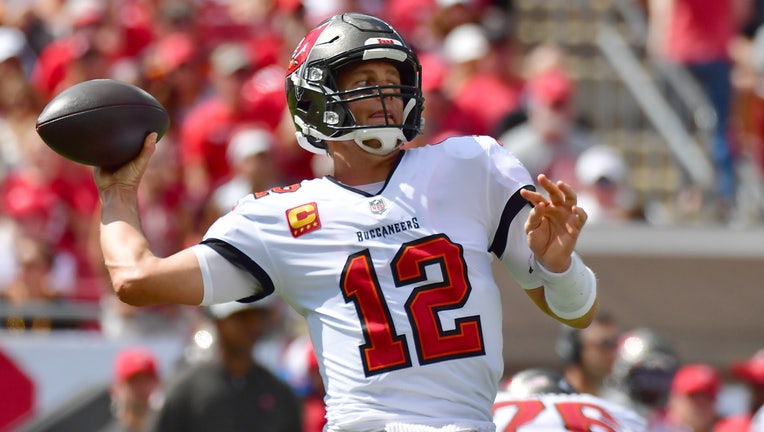 Tom Brady #12 of the Tampa Bay Buccaneers throws a pass during the second quarter against the Miami Dolphins at Raymond James Stadium on October 10, 2021 in Tampa, Florida. (Photo by Julio Aguilar/Getty Images)

TAMPA, Fla. - Tom Brady says his heavily wrapped throwing hand is sore but he expects to play when the Buccaneers visit the Philadelphia Eagles on Thursday night.

Brady injured his right hand in the first half of Tampa Bay’s 45-17 win over Miami on Sunday. He finished off his first career 400-yard, five-TD performance with a pair of scoring passes in the fourth quarter.

"It’s a little sore but I expected it to be," Brady said Tuesday. "We signed up for a contact sport. You get different bumps and bruises throughout the year and we’ll just deal with it the best we can. This bump and bruise happens to be on my hand. Just trying to be preventive and precautious, be smart. It’s less than 48 hours since it happened so it’s not like it’s had five days, but again I feel confident I’ll be able to go out there and do what I need to do."

The defending Super Bowl champion Buccaneers (4-1) are playing their third road game and fourth overall in 19 days. The 44-year-old Brady leads the NFL with 1,767 yards passing and is second with 15 TDs.

"If it was my left hand, I wouldn't think two seconds about it," Brady said. "The fact that it's your throwing hand, there aren't many things that are that important to a quarterback other than your right shoulder or your right elbow. Anytime you get banged on one of those, it could be an issue, but I think there is no serious injury at all. It’s more discomfort, but I think it'll be gone in about a day or two."