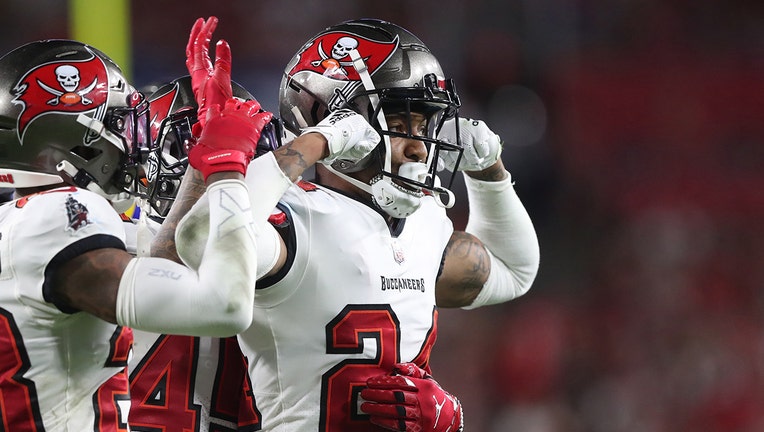 TAMPA, Fla. - Tom Brady stepped to the podium and reiterated how good it felt to stop his longest losing streak in 20 years.

"That was awesome," the seven-time Super Bowl champion exclaimed Sunday. "That was (expletive) awesome!"

Brady tossed a 1-yard touchdown pass to rookie Cade Otton with 9 seconds remaining, giving the Bucs a sloppy but confidence-boosting 16-13 victory over the Los Angeles Rams in a matchup of the past two NFL champions.

Brady took over with 44 seconds left and went 5 of 6 for 60 yards on the game-winning drive, the record 55th of his career. The 45-year-old avoided his first four-game losing streak since 2002 and beat the Rams for the first time in four tries since joining the Bucs (4-5) two seasons ago.

"We needed it and we got it. We fought until the end," Brady said. "The defense played great. We made some plays offensively. ... Hopefully this gives us some confidence and we can win again next week and get to 5-5, which would be good for us at the bye week."

Cooper Kupp scored on a 69-yard reception in the second quarter and Matt Gay kicked field goals of 26 and 35 yards after halftime for the Rams (3-5), who looked like they may be able hold on to win when they stopped Brady on downs from the Los Angeles 6 with just under two minutes to go.

But Matthew Stafford, who threw for 165 yards and one TD, was unable to run out the clock on the Rams’ final possession.

"That’s what you want on offense, right? You want that opportunity to be able to kneel on it, and we’re four, five yards away," Stafford said.

"Tom’s a heck of a player. He did a great job. I thought our defense played great all night," Stafford added. "It’s a lot to ask to have them do that twice there late in the game. We definitely had our opportunity, and we didn’t capitalize. It’s really disappointing."

Brady finished 36 of 58 for 280 yards, becoming the first player in NFL history to throw for more than 100,000 yards in a career — even though he averaged just 4.8 yards per attempt in the Bucs’ largely one-dimensional, short-passing offense. He surpassed the milestone on a 15-yard completion to Leonard Fournette that set up the last of Ryan Succop’s three field goals.

The league’s career passing leader began the day needing 164 yards to reach a plateau Brady concedes no one would have imagined was possible when he entered the NFL as a sixth-round draft pick in 2000.

Brady, who owns nearly every meaningful league passing record, went over the mark in his 374th career game, including playoffs.

Brady set a couple more records late, moving ahead of Peyton Manning for the most game-winning drives and matching Manning with his 43rd career fourth-quarter comeback.

Stafford finished 13 of 27 without an interception. Kupp, playing on a sore ankle he injured in the previous week’s loss against San Francisco, had eight catches for 127 yards.

Like the Buccaneers, the Rams have sputtered offensively the first half of the season. Both teams rank near the bottom of the league in scoring and on Sunday once again barely resembled the teams that faced each other in the playoffs last January.

Tampa Bay’s red-zone problems persisted, with Brady settling for Succop’s 20-yard field goal on the Bucs’ opening possession. Meanwhile, Stafford’s long TD pass to Kupp accounted for most of the 104 yards the Rams gained before halftime.

Succop’s third field goal trimmed the Rams’ lead to 13-9. Brady led a drive to the Rams 6 on his next possession, but the threat stalled with three straight incompletions into the end zone. Jalen Ramsey broke up the fourth pass, but but couldn’t hold on for an interception.

"There’s really no other way to put it, this is a tough pill to swallow," Rams coach Sean McVay said.

"I thought our defense did enough to win. Clearly offensively, not even close to good enough. I’m a big part of that. ... Had a chance to be able to close out the game out there, really didn’t get it done," McVay added. "This is not good enough. Changes have to be made. Adjustments have to be made. We can’t continue to go on with this."

Brady hasn’t thrown an interception since a Week 1 victory over Dallas, a stretch of 373 consecutive attempts. His touchdown-to-interception ratio this season is an NFL-best 10-to-1.

While never team turned the ball over, there were plenty of errant throws and dropped passes that contributed to the Rams only having 206 yards of total offense and the Bucs not getting into the end zone until the closing seconds.

For much of the day, punter Jake Camarda was Tampa Bay’s most effective weapon. The rookie backed Los Angeles up with kicks of 68, 74 and 66 yards.

Buccaneers: Travel to Munich, Germany to face Seattle next Sunday.