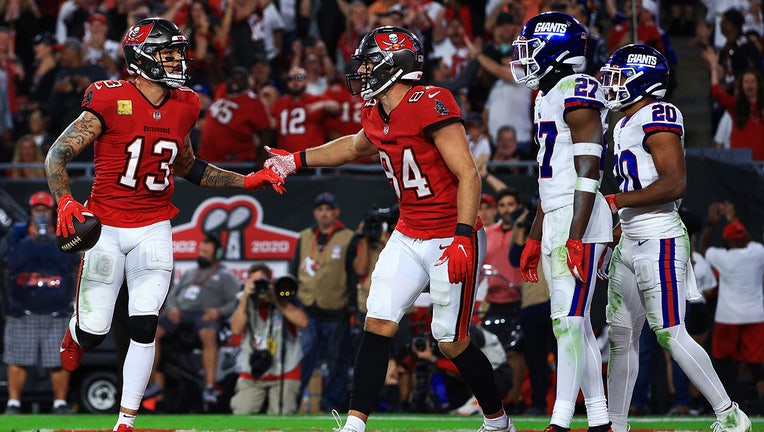 Mike Evans catches a touchdown pass to become the player with the most touchdowns in Buccaneers history, against the New York Giants during the third quarter at Raymond James Stadium on November 22, 2021 in Tampa, Florida. (Photo by Mike Ehrmann/Gett

The Super Bowl champion Buccaneers (7-3) snapped a two-game losing streak as Brady avoided dropping three in a row for the first time since 2002.

Daniel Jones threw a TD pass to left tackle Andrew Thomas and the Giants (3-7) stayed close for one half before unraveling.

Down 17-10, the Giants drove to the Buccaneers 25 on the opening drive of the third quarter before Jones, under pressure from Devin White, threw incomplete on fourth-and-1 after rushing to the line to beat the play clock.

Brady then connected with Mike Evans on a 5-yard TD pass to extend the lead to 24-10. Evans set a franchise record with his 72nd touchdown, passing Mike Alstott. He made sure to keep the ball after giving away Brady’s 600th TD pass to a fan earlier in the season.

Jones threw an interception to 310-pound nose tackle Steve McLendon on New York’s next possession, but Tampa settled for Ryan Succop’s 40-yard field goal despite starting at the Giants 37. It was McLendon’s first career pick in 12 seasons.

Jones was picked by Mike Edwards in the fourth quarter and Succop hit a 30-yarder to cap the scoring. 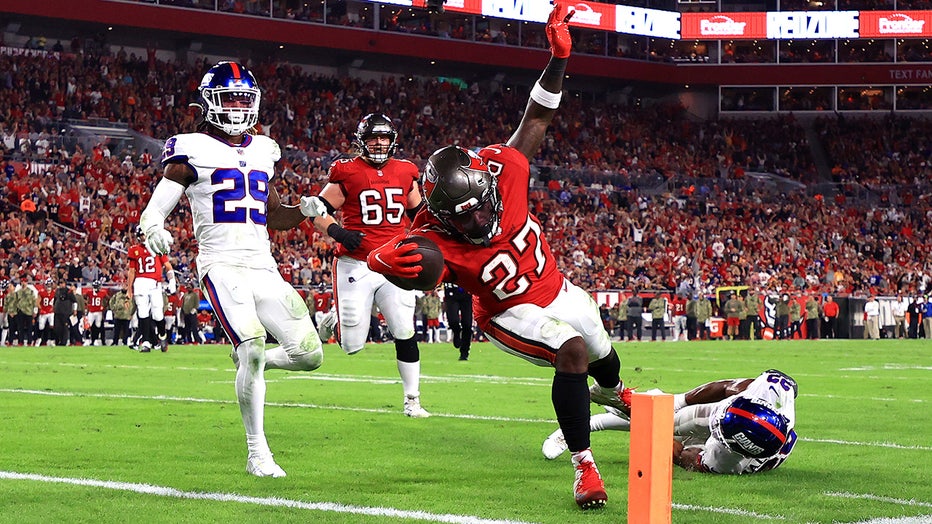 Ronald Jones dives into the end zone for a touchdown in the second quarter of the game against the New York Giants at Raymond James Stadium on November 22, 2021 in Tampa, Florida. (Photo by Mike Ehrmann/Getty Images)

Brady finished 30 of 46 with one interception. He improved to 6-1 against the Giants in the regular season but has lost two Super Bowls to New York, including one that prevented New England from a perfect season.

The seven-time Super Bowl champion leads the NFL with 29 TD passes and is second in yards passing with 3,172.

Star running back Saquon Barkley returned for the Giants after missing four games with a sprained ankle but only had 25 yards rushing on six carries.

Jones was sacked twice by a ferocious defense that was missing defensive tackle Vita Vea due to a knee injury.

Brady came out firing, completing his first five passes, including a 13-yard TD toss to Chris Godwin. Godwin and Evans each ran the ball on an end-around during that drive. For Evans, it was his first career carry in eight seasons.

Brady started 10 for 10 before misfiring on a deep ball to Evans. On the next play, the 44-year-old scrambled 10 yards on third-and-4 to extend Tampa’s drive that ended with Succop kicking a 25-yard field goal that made it 10-3. Brady showed nifty mobility on the run before sliding into a defender. He came up fired up, signaling first down and screaming. 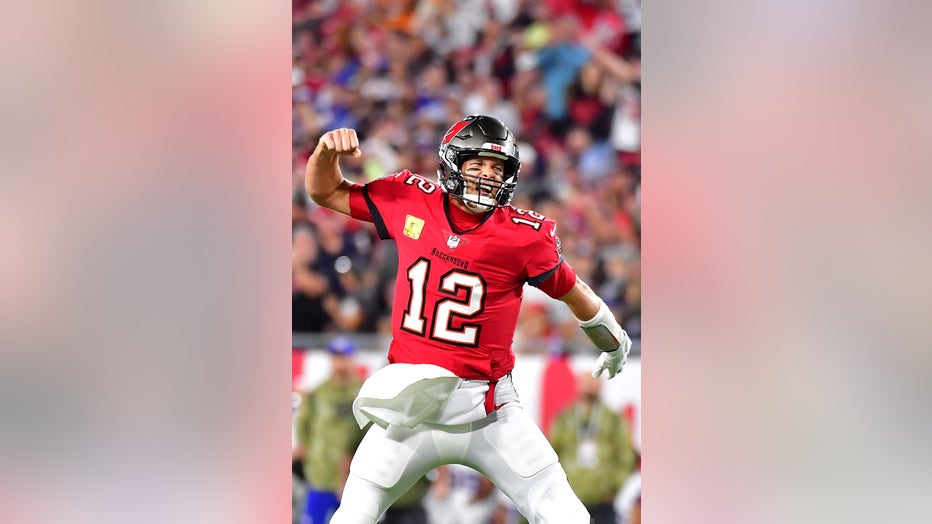 Tom Brady reacts after running for a first down in the first quarter of the game against the New York Giants at Raymond James Stadium on November 22, 2021 in Tampa, Florida. (Photo by Julio Aguilar/Getty Images)

The Giants tied it at 10-10 after Evans let a pass bounce off his hands and right to Adoree Jackson, who returned the pick 5 yards to the Buccaneers 10.

Jones lofted a 2-yard TD pass to Thomas, who had to jump as he was backing up to haul it in. The 6-foot-6, 315-pound Thomas, wearing a brace on his right arm, was back after missing four games. He celebrated his first career reception with the rest of the offensive line circling around him.

TURN OFF THE LIGHTS

The Giants have lost 10 straight games in prime time, including contests at Washington and Kansas City this season.

After using an offensive lineman as a receiver, the Giants had rookie receiver Kardarius Toney throw a deep pass to Darius Slayton that fell incomplete. Cornerback Sean Murphy-Bunting was initially called for pass interference on the play, but the flag was picked up.

Giants: Toney suffered a quad bruise in the fourth quarter. ... FS Logan Ryan was out because of COVID-19 protocols. ... TE Kyle Rudolph left with an ankle injury in the third quarter.

Buccaneers: LG Ali Marpet left in the second quarter with an oblique strain.