TAMPA, Fla. - Team managers pull a little orange wagon up and down the Buccaneers' practice field. In it are the items necessary for battling the heat and humidity of Tampa summers: Cold sports drinks, lots of clean fresh towels, and a shaker of baby powder, to name a few.

Bucs veteran center Ryan Jensen knew what was coming as soon as he found out Tom Brady was coming.

"I had seen an article last year, talking about just that," Jensen said recently at team headquarters.

"That" is the obsession the Bucs' new quarterback has for ensuring the ball remains as dry as possible during the center-quarterback exchange.

Players sweat. Players that play over the football, as the center does, tend to sweat on the ball. A wet ball is hard to handle, harder to throw.

After a brief exchange of pleasantries, Brady explained to Jensen his plan for keeping the ball safe and dry.

"It came up in the first conversation we ever had," recalls Jensen. "The first five minutes of conversation we're just talking life, just talking 'Hey, I'm excited to come down.' Then it was right into business. He started talking about the sweat, and what he's had centers in the past do, you know, with the towel thing and the baby powder. I knew that conversation was going to be had. It wasn't a big surprise. " 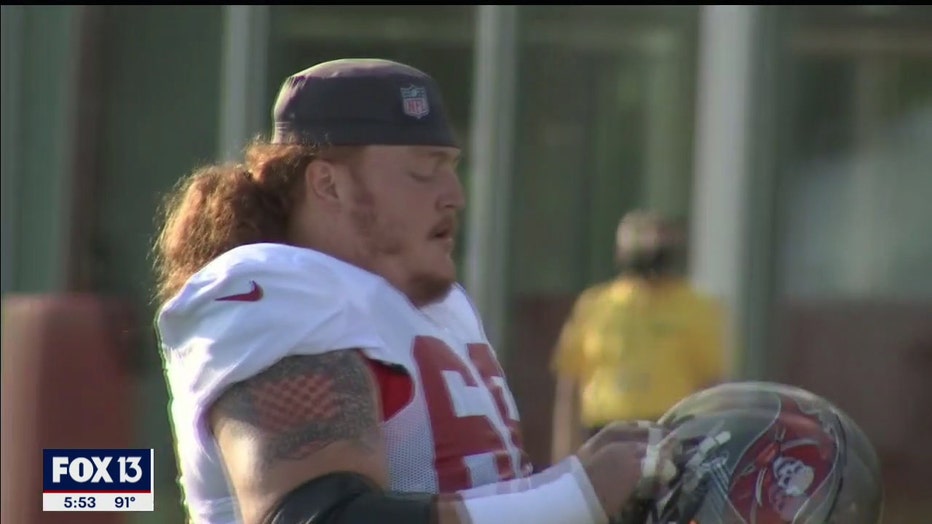 Ryan Jensen wears a twice folded towel tucked-in at the waistband of his uniform pants, keeping that area of his backside free from running rivulets.

A liberal dousing on the same area of baby powder keeps Jensen's bottom as dry as possible in 90-degree heat and high humidity.

When the quarterback takes the snap from center, the ball is delivered directly beneath the center’s derriere. Jensen is willing to do whatever it takes to keep his new teammate comfortable.

"If that's what Tom wants, and it's going to make him a better quarterback, I'm going to do what I have to do."

The Ryan-Jensen-to-Tom-Brady, center-to-quarterback exchange will come during a live scrimmage Friday, August 28 at Raymond James Stadium.

The session will be closed to the public due to the pandemic.

Fans will get their first glimpse of the two working together during the season opener between the Bucs and the host New Orleans Saints, broadcast on FOX 13 at 4:25 p.m. EDT Sunday, September 13.