TAMPA, Fla. - UCF’s long wait for another shot at Florida is over, with the Knights of Central Florida emerging victorious.

The neighboring programs haven’t faced each other on the football field since Florida won 42-0 during its 2006 national championship season. That changed Thursday night, when the Knights and Gators meet in the Gasparilla Bowl.

It’s a preview of sorts for a two-for-one series that begins at the Swamp in 2024. The teams are also scheduled to play at UCF’s on-campus stadium in Orlando in 2030 and back in Gainesville again in 2033.

A victory in the Gasparilla Bowl arguably means more to the Knights, who have accepted an invitation to move from the American Athletic Conference to the Big 12 and would like nothing more than to make a statement about their direction under former Auburn coach Gus Malzahn.

Florida was eager to finish strong after coach Dan Mullen was fired ahead of its regular-season finale against Florida State.

"It’s bragging rights. This is a big game for us," said interim coach Greg Knox, who led the Gators to a 24-21 victory over FSU.

"It’s not a rivalry, but it’s an in-state game against an in-state team with guys that are playing against guys they played against in high school or played with in high school," Knox added. "So, it’s a big game and our kids are approaching it that way. They’re excited about playing this game." 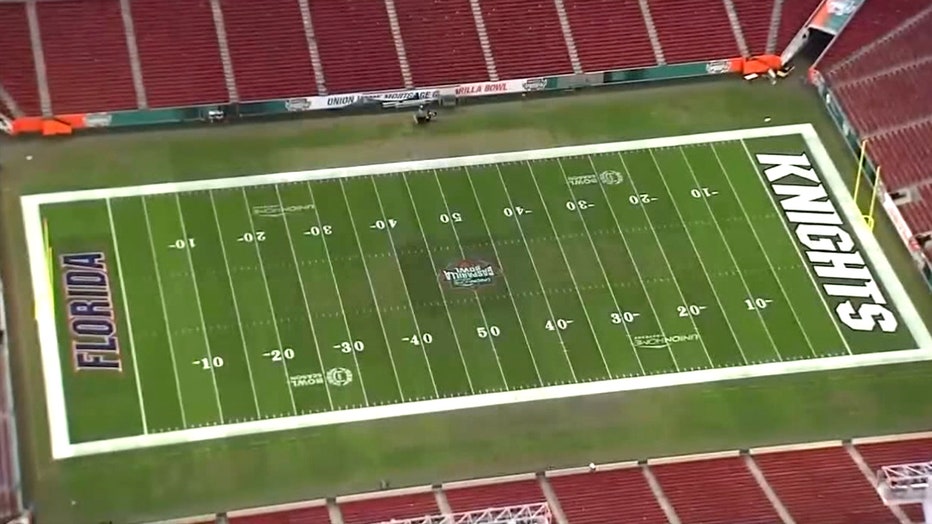 It’s also an opportunity for returning players to make an impression on Billy Napier, the former Louisiana coach hired to plot the future for a team that got off to a 3-1 start and was ranked in the top 10 before losing five of seven during the stretch that cost Mullen his job.

"Our guys have done well with it," Knox said of how the Gators have adjusted to the coaching transition while also preparing to face UCF.

"That has been a big deal because the new staff has had some things they wanted them to do and they’ve been working with us as far as practicing and everything," Knox added. "I think they handled it very well."

The Gators (6-6) were without several key players, including injured quarterback Anthony Richardson and defensive end Zach Carter, who opted out after deciding to leave for the NFL draft.

Emory Jones, who shared the quarterback job with Richardson, started his last game for Florida before entering the transfer portal. Wide receiver Jacob Copeland also is transferring and did not play, but cornerback Kaiir Elam plans to suit up despite being the team’s highest projected draft pick.

"They’re a lot better than their record, I’ll tell you that," Malzahn said. "I think everybody knows that. They’re extremely talented. It’s a big challenge for us, no doubt.

"Obviously it’s a big game for us. It’s an in-state opponent. A very quality opponent that has some really, really good talent all across the board. It’s a great opportunity for our program and our players, and they understand that."

They left Raymond James Stadium 9-4, with a convincing 29-17 victory over their in-state rival.

Like Florida, UCF is losing a highly regarded quarterback to the transfer portal.

Mikey Keene started the last nine games of the regular season for the Knights after Dillon Gabriel broke his left collarbone against Louisville in September.

Gabriel, who threw for 61 touchdowns over the previous two seasons, elected to leave the program last month. He has committed to UCLA.

Keene threw for 1,586 yards, nine TDs and six interceptions during the regular season.

UCF is making its fifth appearance in a game known as the St. Petersburg Bowl before it moved to Raymond James Stadium in 2018.

The Knights played in St. Petersburg in 2009, 2012 and 2014 before making their first appearance in the Gasparilla Bowl in 2019. It’s the initial Gasparilla appearance for Florida, which isn’t accustomed to making bowl trips that end before Christmas.

Bragging rights aren’t the only motivation for Florida to finish strong. With a win, the Gators would avoid finishing with their first losing record since 2017, the last of three seasons under former coach Jim McElwain.