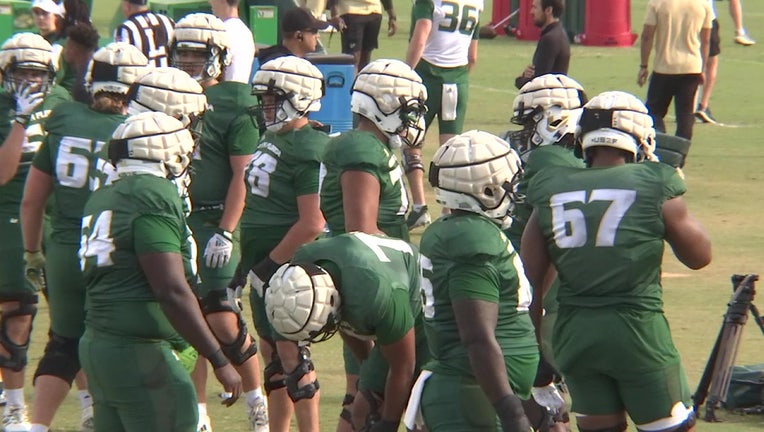 TAMPA, Fla. - Dubbed the Swamp by Steve Spurrier, the Gators' home field, filled with more than 90,000 fans, is a tough place for visiting teams.

"I say it's beautiful because, where I come from, there's not too many people that have the opportunity to be able to do what I do," said Bulls defensive lineman Jatorian Hansford. "To be able to play in front of a crowd like that."

Jeff Scott said the environment – especially the volume – is a challenge, but admits, "It's one of the great college venues and what makes college football so special."

Taking on Florida in the Swamp can be intimidating. The University of South Florida Bulls go into this weekend as underdogs.

They know it will be a blowout if they step out onto the field in awe of the surroundings.

"We can't get caught up in the stadium lights and all the fans that are yelling, whatever they are yelling," said Bulls center Brad Cecil. "Just falling back on our preparation."

The USF program has had some big wins, historically.

The Bulls have yet to beat the Florida Gators (0-2) and Jeff Scott is still in search of that elusive signature win.

"The best team on paper doesn't win. It's the team that plays the best," said Scott. "It just so happened that last week there were about four or five examples of where that exact thing happened around the country."

Within the team, the Bulls believe they have the ability to pull off a shocking upset, but is the feeling the same around campus?

"It's going to be tough," said one Bulls student. "We're going to have to pressure the quarterback quite a lot, I think."

Not all USF students are in agreement that they can win.

"We just don't, honestly," said another USF student. "I'm sorry to say it. I'm a betting man and I'm taking UF all the way."

With only four wins against F.C.S. teams, beating Florida would be a crowning moment in the Jeff Scott era.

"Beating them in the Swamp would be something I'd never forget for the rest of my life," said Cecil.