The battle to the the Bulls’ QB

TAMPA, Fla. - USF has maybe its most talented stable of quarterbacks they've ever had. It's a group of four made up of two Power 5 transfers and two top recruits from the Sunshine State.

"I honestly believe all four of those guys have a legitimate potential to be our starter," said USF head coach Jeff Scott.  "I'm not sure I'd say that, maybe, before we started spring practice."

Cade Fortin is in his second year with USF and right now he has a grip on the job, running number one in the rotation. For the former UNC Tar Heel, this year has been night and day from a year ago.

"This is the first time that I've gone into an offseason where I had the same offense, same offensive coordinator, same quarterback coach since my junior year in high school," said Fortin. 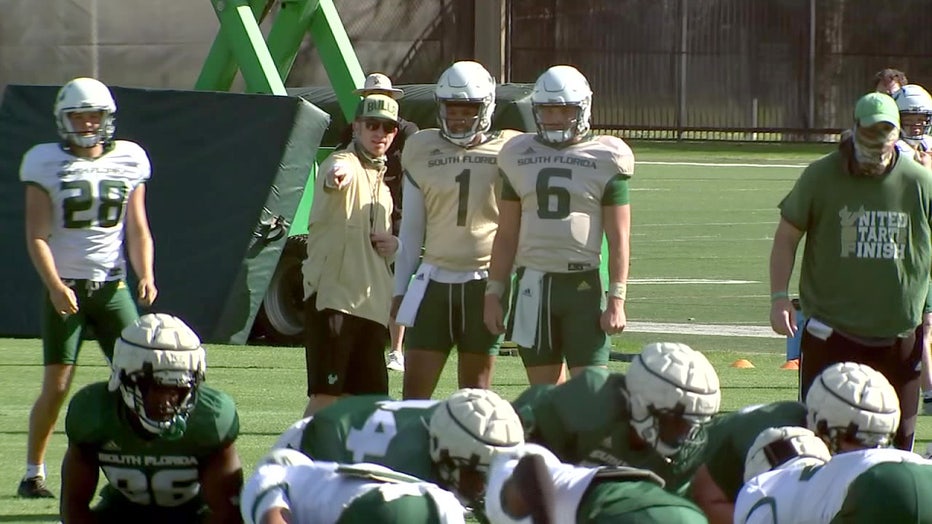 Former Miami Hurricane Jarren Williams, a five-star recruit coming out of high school, picked the Bulls without any guarantees. It's been a humbling year for him since leaving the spotlight in Miami and a tough life lesson.

"When I was in that position, I feel like I wasn't the best leader that I could have been," said Williams.  "There are some things that happened, but I'm glad I went through that because it's made me a better person. I'm just grateful to have this opportunity here."

The Bulls’ quarterback situation last season was like a revolving door. Four different QBs started for USF and that inconsistency led to a 1-8 season in Jeff Scott's first year.

Now that Scott has a full spring to work with his players, he's confident a standout starting quarterback will emerge.

But Scott doesn't expect that will happen until closer to the season.

"It’s a good problem to have," he added. "It’s good that we have several guys that I think can legitimately be the starter, but it’s still a problem."