TAMPA, Fla. - Shaniya Benjamin starred at Alonso High School in sprints and jumps. Now a sophomore at the University of South Florida, she has qualified for the NCAA Track and Field Championships in Eugene, Oregon.

Benjamin will be competing in the long jump, the event in which she already holds the school record. Her practices are long, and the drive to succeed largely comes from within.

The runway is the narrow stretch of concrete down which Benjamin uses her sprinter's speed to leap and launch over 21 feet through the air, landing deftly into the pit of sand where the jumper's distance is marked. Making the NCAA’S as a sophomore is an accomplishment in and of itself. And her qualifying jump put her entry in the big show with authority.

"The last jump was my qualifying jump, but also the jump I took in the first round was enough to qualify me," Benjamin shared.  "But we wanted to make sure I was secure in and I didn’t have to struggle to get in." 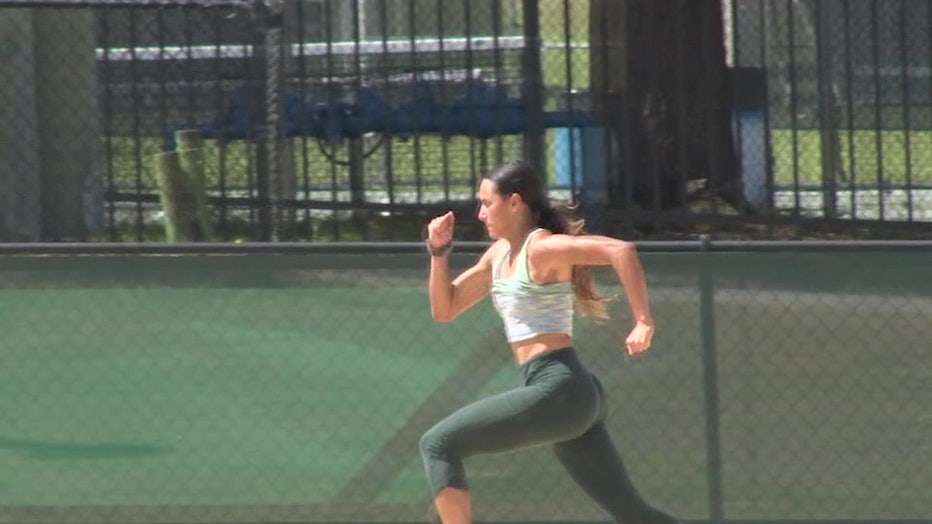 Just across the track from where Benjamin is making her jumps, hurdlers Shaneylix Davila and Sanique Walker are also busy preparing for Eugene. Davila qualified in the 100-meter hurdles and Walker in the 400-meter hurdles.

Davila is a recent graduate of USF, completing her studies in Health Sciences. Her immediate goal is to better her time of 13.22 against the nation’s very best in Eugene. She explains her journey to becoming a National qualifier began with an innocuous comment from a high school coach.

"He said, ‘Look there’s a hurdle there,’" Davila said. "And I said, ’I’m going to jump over it.’ And after that, I realized I could really be good at it. We took it day by day and eventually I got the steps down. It all became very natural to me."

The NCAA Championships begin on June 8. Benjamin, Davila, Walker and high-jumper Romaine Beckford will all be wearing the green and gold, representing the USF Bulls on the national stage.