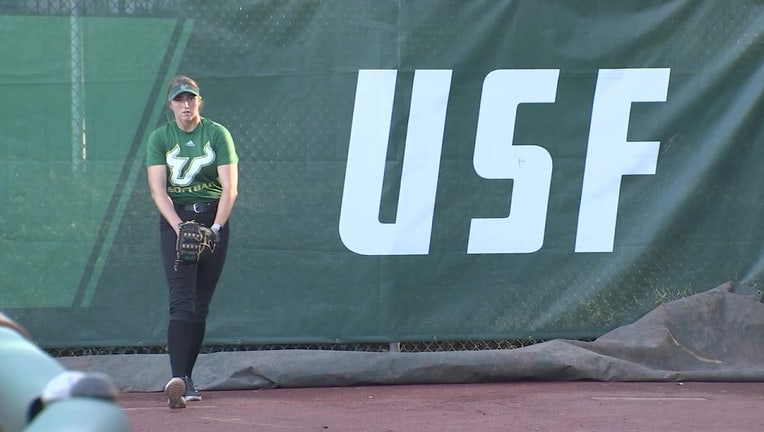 TAMPA, Fla. - As redshirt senior Georgina Corrick nears the end of her final season with the University of South Florida Bulls. She's hoping to accomplish one thing she's yet to in her historic college career: Advance in the NCAA tournament.

"We've never made it out of the regional round in my years with the team," said Corrick. "We talk a lot about our 2012 team, which ended up going to the Women's College World Series, and it's one of those things that you really aspire to be that team."

Like the 2022 squad, the Bulls' World Series team was noted for its strong defense and suffocating pitching. A 13-year-old Corrick watched then USF pitcher Sara Nevins pick apart batters en route to the school's first and only World Series appearance.

Ten years later it's Corrick in the pitcher's circle, breaking school and conference records set by Nevins, and racking up titles along the way.

In March, Corrick broke USF's strikeout record (previously held by Nevins) with career punch out number 1,104. She's now at 1,291 career strikeouts. Her 407 strikeouts this season leads all of NCAA softball.

She also leads the NCAA in innings pitched (266.1), shutouts (20) and wins (36). Her unreal .53 ERA is third in the country, though she's put in more than double the inning load of the two players above her in the rankings.

For the fourth consecutive year, Corrick has been named the American Athletic Conference Best Pitcher of the Year. She also recently learned she'd become a top 10 finalist for USA Softball's Best Collegiate Player of the Year award.

"Being able to be on that list is a very, very humbling thing, and it's a testament to how hard we've worked that we're kind of a mid-major, lower in the RPIs [rating percentage index] and still earning names on those lists means the world to me," said Corrick.

If Corrick hopes to make it beyond the Tallahassee regional tournament featuring No. 2 overall Florida State (52-5) and Mississippi State (33-24) she knows the Bulls (44-14) will need a balanced effort.

"Sometimes we rely too much on our defense and the strength of our pitching, and we're able to get by with a little bit less run support than maybe other teams," said Corrick. "Mississippi State, we have to expect them to score some runs. The last couple tournaments we've done well putting up a lot of runs on the board and having a little bit more of an explosive offense and that's what we're going to need against a team like Mississippi State who has girls like Mia Davidson who are top of the nation in home runs."

While a deep run in the tournament is the goal, Corrick said she's already proud of what USF's appearance means for their program.

"I'm really glad that we’re going to get to play against teams like FSU and like Mississippi State who have a lot of viewership and have a lot of attention on their programs and reminding them that USF belongs there," said Corrick.

Over her five seasons with the Bulls, Corrick has not only been able to grab the spotlight for her program, but also for women's sports.

"I think it’s paramount to who we are as women in a very male-dominated sports environment sometimes," said Corrick. "This is the first year, or the first couple of years really, that I’ve seen that people are respecting what women’s sports brings to entertainment and how we work just as hard as our male counterparts even though we receive a quarter of the funding, a quarter of the attention."

While she has a marine biology degree under her belt and is working towards a master's in global sustainability, Corrick said she hopes to play softball professionally once her season ends. What once seemed an impossible career, Corrick sees a shift in opportunities for female athletes.

As her reign at USF nears the end, the British-born 23-year-old said she hopes her legacy continues far beyond the field.

"I'm realizing how much more it's bigger than who I am and what I've been able to do," said Corrick. "It's creating a culture and creating a dynamic of little girls who not only see me as someone they want to be but see it as something they could possibly be."