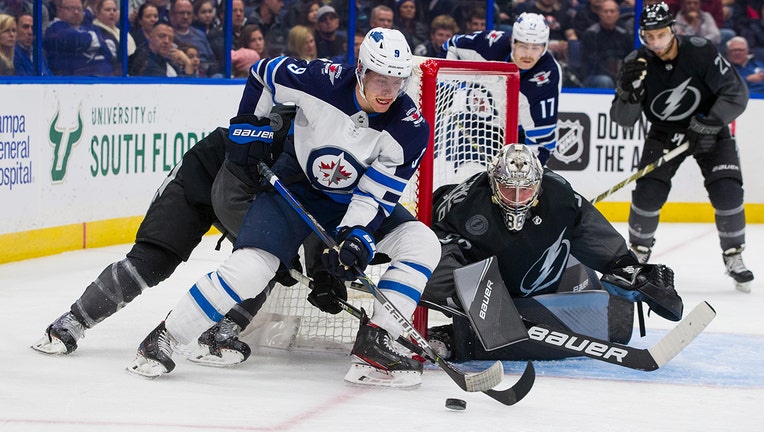 Derek Grant had a short-handed and Rickard Rakell also scored for Anaheim. Ryan Miller finished with 21 saves as the Ducks lost for the eighth time in nine games (1-5-3).

Point’s second of the night and seventh of the season gave the Lightning the lead for good with 7:21 left in the second period. He as he took a pass from Victor Hedman, rushed down the right wing side and put a shot under Miller’s arm for his second multi-goal game of the season to put Tampa Bay up 3-2.

Maroon pounced on a rebound on Mikhail Sergachev’s shot with 5:35 left to make it a two-goal lead. Tampa Bay scored three times on five shots in the period.

Cirelli got his fifth of the season, giving him goals in four consecutive games, at 6:20 of the third, and Palat added the 100th of his career, on a power play, with 2:33 left to cap the scoring.

Point opened the scoring with 3:52 left in the first when Jan Rutta’s shot from the point was knocked down in the crease and Point popped the loose puck in.

Grant answered that 1:52 later when Kucherov’s pass attempt hit the shin of linesman Derek Nansen and bounced to an open Grant, who beat Vasilevskiy with a long-range wrist.

Kucherov put the Lightning back in front as he came off the bend to take a feed from Anthony Cirelli and beat Miller at 5:28 of the second.

NOTES: Anaheim D Hampus Lindholm returned after missing eight games with a lower body injury. ... Tampa Bay captain Steven Stamkos was scratched with a lower-body injury. ... Long time NHL executive and seven-time Stanley Cup winner Jimmy Devellano, a winter resident in the Tampa area, attended his first game at Amalie Arena since undergoing brain surgery. ... Kucherov returned to the lineup after missing Thursday’s game with an upper-body injury. Hedman and LW Alex Killorn each extended their point streaks to seven games. ... Anaheim’s five short-handed goals are tied for the most in the league.