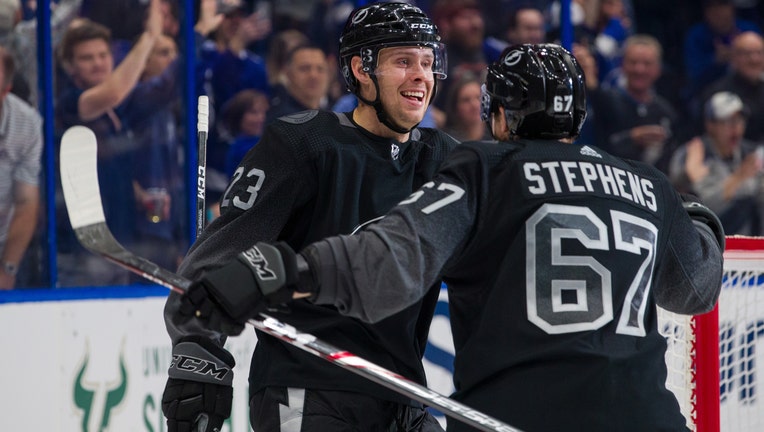 TAMPA, FL - FEBRUARY 8: Carter Verhaeghe #23 of the Tampa Bay Lightning celebrates his goal with teammate Mitchell Stephens #67 against the New York Islanders during the third period at Amalie Arena on February 8, 2020 in Tampa, Florida. (Photo by Sc

TAMPA, Fla. - Brayden Point, Steven Stamkos and Carter Verhaeghe scored and the Tampa Bay Lightning extended their winning streak to six games with a 3-1 victory over the New York Islanders on Saturday night.

Derick Brassard scored for New York, which lost in regulation for the first time in six games. Semyon Varlamov stopped 27 shots for the Islanders.

New York's Mat Barzal scored with 37.8 seconds left in the first period, but the goal was overturned on an offside challenge.

Point put the Lightning in front with his 20th goal of the season, just 14 seconds into the second period. Nikita Kucherov picked up a puck that circled the boards and fed Point for a breakaway. Point skated in to the inside edge of the right circle and sent a slap shot past Varmalov, becoming the fourth Lightning player to reach 20 goals this season. He joins Steven Stamkos, Alex Killorn and Kucherov as 20-goal scorers.

Barzal had a chance to tie the game late in the second period as he skated up ice on a partial breakaway, but Anthony Cirelli was able to keep pace with Barzal, who won the Fastest Skater Competition at the All-Star game, and gain leverage to lift Barzal’s stick and strip the puck, preventing a shot attempt.

Verhaeghe put the Lightning up 2-0 at 6:25 of the third period, coming off the left boards with a clear lane to the front of the net. He slipped a backhand shot under the left arm of Varlomov for his sixth goal of the season.

Brassard put the Islanders on the board at 12:12 as he gained inside position at the top of the crease and pushed a pass from Justin Bailey past Vasilevskiy with five seconds remaining on a power play.

UP NEXT
Lightning: At Columbus Blue Jackets on Monday.
Islanders: At Washington Capitals on Monday.
___
More AP NHL: https://apnews.com/NHL and https://twitter.com/AP_Sports