He said he's been able to reconcile an abrupt ending to his historic 22-year career because of the dire landscape the COVID-19 pandemic has brought on across the world.

"I was able to put the weird ending, the abrupt stoppage of play to an ending aside for the bigger picture, because obviously you're worried about family, friends," he said. "It is what it is. Once I was able to put that aside, and say, 'Retire Vince. Go and golf now,' it's been easier." 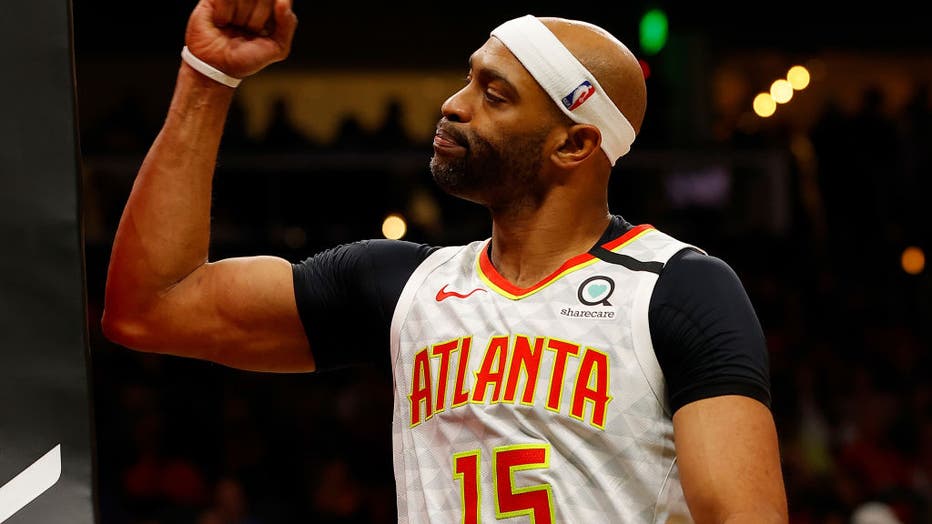 ATLANTA, GEORGIA - MARCH 02: Vince Carter #15 of the Atlanta Hawks reacts in the second half against the Memphis Grizzlies at State Farm Arena on March 02, 2020 in Atlanta, Georgia. NOTE TO USER: User expressly acknowledges and agrees that, by downlo

Carter joked "the start of retirement" has been great so far, especially for that golf game, and helped him work through the uncertainty before the NBA announced its official plans and helped ease him into the transition to retirement.

With the Hawks out of the Orlando season-resuming tournament, Carter's final NBA game was against the Knicks at State Farm Arena on March 11, when the league halted games due to the coronavirus pandemic.

In that final contest, Carter came off the bench for the Atlanta Hawks in the closing seconds to sink an uncontested 3-pointer that finished off a 136-131 overtime loss to New York.

Vince Carter’s possible final NBA act was a memorable one

Vince Carter knew the end was coming. Yet it's still strange to consider, that he might not get the final month of his long, brilliant career.

Carter said on Thursday's podcast if he hadn't made that shot, he would want to get back on a NBA court more right now.

"Making my last shot helped the situation. I think if I didn't make my last shot, it'd have been a little different. It'd have felt a little different. I'd have been itching to, at least get back and just play one minute and just make one shot. I don't care what it would be: free throw, layup, I don't care," Carter said. "As a player playing your last game -- whether you know it or not -- you always want to say, 'Well, at least I made the last shot of my career.' And I can actually say that, so I'm happy."

He said realizing and understanding his veteran status on the Hawks roster helped him decide it was time to hang up his sneakers, and he was glad to do it "on my terms."

"I understand how the NBA works. Sometimes it gets frustrating for the older players in the league when you still feel like you compete," Carter said. "I understand I was on a team where we weren't playing for a playoff position so now it's kind of player development, and that's when the older players or whatever kind of -- I don't want to use the term 'pushed to the side,' but now it's about developing younger players. And I understood that, and I knew that coming in. That's just the frustrating part. But if I'm playing on a different team that's still playing and competing for a playoff spot and/or championship, things could be different. I don't know."

The Hawks issued a statement congratulating Carter on his official retirement and thanking him for his two years in Atlanta.

"Over the last two years, Vince Carter has been a committed leader, respected mentor and influential example on the court, in the locker room and in the Atlanta community," the Hawks statement said. "It’s an honor to the Hawks organization that he completed his Hall-of-Fame career wearing Atlanta across his chest and representing our city."

"Half man, half amazing, all class!" Hawks head coach Lloyd Pierce tweeted. "It's been an honor and a privilege for me to work with you."

The 43-year-old also played for the Raptors, Nets, Magic, Suns, Mavericks, Grizzlies and Kings. The North Carolina product was an eight-time All-Star and 1998-99 Rookie of the Year.