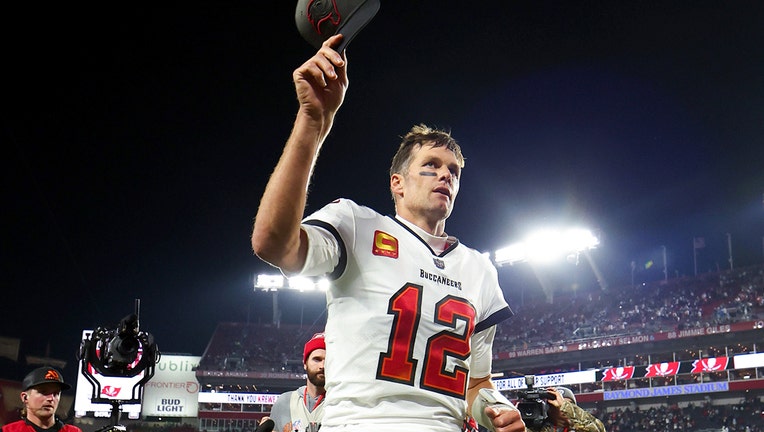 Tom Brady #12 of the Tampa Bay Buccaneers walks off the field after losing to the Dallas Cowboys 31-14 in the NFC Wild Card playoff game at Raymond James Stadium on January 16, 2023 in Tampa, Florida. (Photo by Mike Ehrmann/Getty Images)

TAMPA, Fla. - If Tom Brady retires in the offseason, he’ll walk away following one of the worst playoff games of his career.

The seven-time Super Bowl champion had a tough night against Micah Parsons and the Dallas Cowboys, tossing his first red-zone interception with the Buccaneers in a 31-14 loss that ended Tampa Bay’s up-and-down season Monday night.

Brady won’t be returning home to the Bay Area for a rematch against Brock Purdy and the San Francisco 49ers in the NFC divisional round. He may be going home for good, however.

The 45-year-old, five-time Super Bowl MVP already retired once after last season only to return 40 days later. He said he’ll take more time to make his decision this time around.

Brady waved his cap to the crowd as he jogged off the field for perhaps the final time and stopped to kiss his parents before heading into the tunnel.

Before leaving the podium, Brady thanked reporters, saying: "Hopefully, you know, I love this organization. It’s a great place to be and thank you everybody for welcoming me. ... Very grateful for the respect and hopefully I gave the same thing back to you guys."

Brady had been 7-0 against Dallas before this game, including a 19-3 road win in Week 1.

Though he was only sacked twice, the Cowboys pressured him into several throwaways and forced a bunch of ill-advised passes.

He threw a career-most 66 passes, completing 35 of them for 351 yards, two TDs and one interception. Brady had 65 attempts for New England against San Francisco on Dec. 16, 2012. 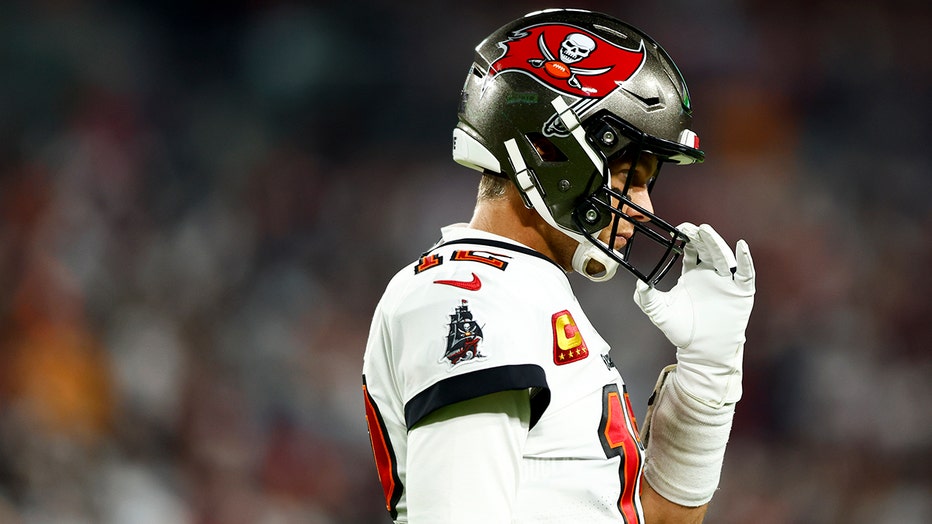 Tom Brady #12 of the Tampa Bay Buccaneers adjusts his helmet during the third quarter of an NFL wild card playoff football game against the Dallas Cowboys at Raymond James Stadium on January 16, 2023 in Tampa, Florida. (Photo by Kevin Sabitus/Getty I

After the Buccaneers went three-and-out on their first two possessions, Brady led a long drive before things fell apart.

On first down from the Cowboys 22, Brady rolled to his right and had open field in front of him but threw incomplete across his body into quadruple coverage in the left corner of the end zone. A few plays later from the Cowboys 5, Brady threw the ball up for grabs in the back of the end zone where the closest player was Cowboys safety Jayron Kearse, who made the pick.

"Not the way we wanted to end it but we didn’t deserve it," Brady said. "Give them credit. They played a good game, made a lot more plays than we did."

Brady hadn’t been shut out in the first half of playoff game since his first one in 2001, the Tuck Rule game on Jan. 19, 2002. The Patriots rallied to beat the Raiders in that game.

Brady and the Bucs (8-10) had no chance for a comeback against Dallas (13-5). Parsons and Co. dominated Brady from start to finish.

"It was typical of the way we played all year, inefficient in the pass game, not very good in the run game, so it’s hard to beat good teams like that," Brady said.

The Bucs finally found the end zone when Brady connected with Julio Jones on a 30-yard TD pass right before the end of the third quarter. But Tampa’s defense gave a TD right back and the Bucs couldn’t score after reaching the Cowboys 2 on their next drive. 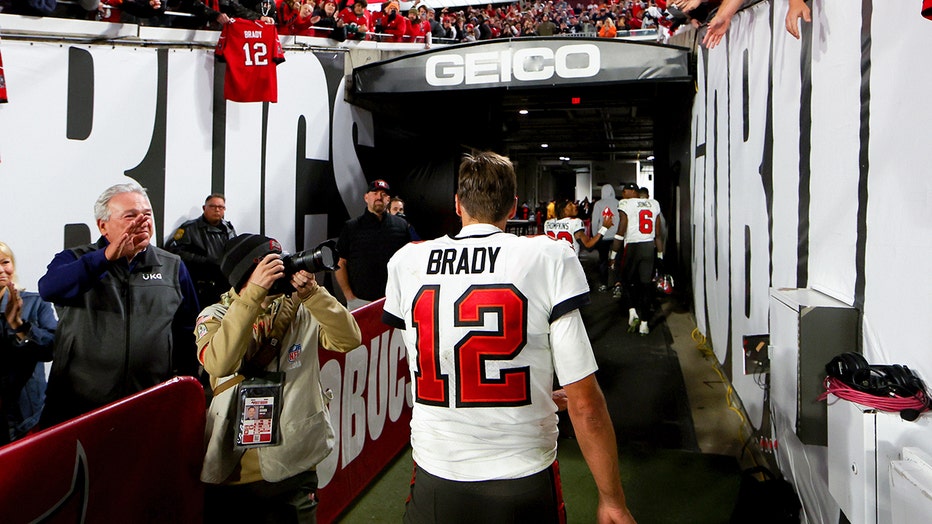 Tom Brady #12 of the Tampa Bay Buccaneers walks off the field after losing to the Dallas Cowboys 31-14 in the NFC Wild Card playoff game at Raymond James Stadium on January 16, 2023 in Tampa, Florida. (Photo by Mike Ehrmann/Getty Images)

It was a tumultuous season personally for Brady. His marriage to Gisele Bündchen ended when they announced in October that their divorce was finalized. He had the first losing season of his 23-year career, though the Buccaneers won the woeful NFC South and earned the No. 4 seed.

Brady is set to become a free agent, so he could choose to continue his unprecedented career with another team. There will be plenty of interest in a player who turns 46 in training camp next season.

The Buccaneers want him back if he continues to play. Linebacker Lavonte David said he'll wait a few weeks before recruiting him.

Brady showed he has plenty left in the regular season despite playing behind an injury-depleted offensive line and without star tight end Rob Gronkowski, who retired in the offseason. He broke his own NFL record for completions in a single season with 490, led the NFC with 4,694 yards and had 25 touchdowns with nine interceptions.

Brady owns nearly every NFL passing record, has won more championships than any player in the sport and is destined for the Pro Football Hall of Fame. Not bad for a sixth-round draft pick.