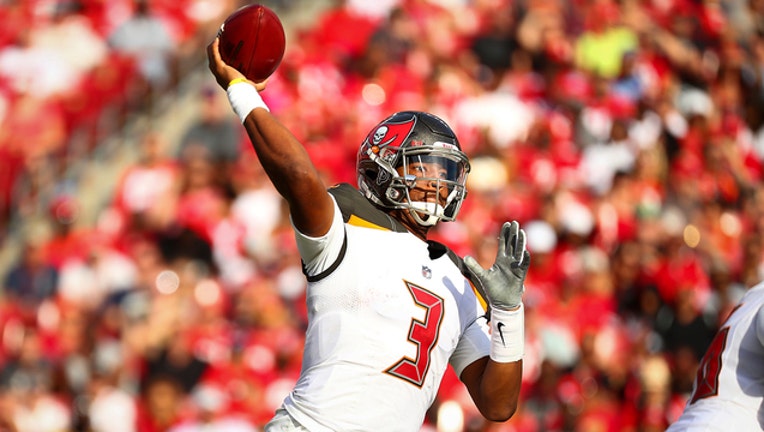 Photo by Will Vragovic/Getty Images

TAMPA, Fla. (AP) - Jameis Winston is determined to make the most of his latest opportunity to prove he's Tampa Bay's long-term solution at quarterback.

The fourth-year pro sparkled in his first start in a month, throwing for 312 yards and two touchdowns in the Buccaneers' 27-9 victory over the San Francisco 49ers on Sunday.

"Jameis played quarterback the way you need to play it in the NFL until you get into desperation time, which we never did today," coach Dirk Koetter said after the Bucs (4-7) snapped a four-game losing streak.

"Jameis wasn't perfect, but he played a good game. I'm proud of him. It's been a difficult road," Koetter added. "He sees what that looks like. He needs to consistently play like that and he can be one of the best."

Winston, benched last month after turning the ball over 11 times in 14 quarters, completed 29 of 38 passes without an interception.

The No. 1 overall pick from the 2015 draft has shared the starting job with Ryan Fitzpatrick this season. Each has played well enough at times that Tampa Bay leads the NFL in passing yards and total offense,, however a porous defense and the league's worst giveaway/takeaway ratio has undermined the team's chances for success.

Winston led TD drives of 73, 75 and 85 yards. His 6-yard scoring pass to Cameron Brate put the Bucs up early, and later teamed with Adam Humphries on a 28-yard TD on a play the quarterback extended by scrambling to his right before throwing back toward the center of the field.

It was the same type of play that often comes back to haunt Winston, who's been criticized throughout his career for poor decision-making.

"He was wide open. It was a decisive decision," Winston said. "When you're decisive with the ball, it's no thinking about it. You trust your instincts and make the throw."

Tampa Bay (4-7), meanwhile, had four sacks and forced turnovers on defense for the first time in eight games, with Ryan Smith and Isaiah Johnson coming up with the team's first interceptions since a loss to Pittsburgh on Sept. 24. Midseason acquisition Cairo Santos also made two field goals and three extra points.

"We made all our kicks. We got two takeaways. We didn't turn it over. Life is good," Koetter said.

Matt Breida rushed for 106 yards for the 49ers (2-9). Nick Mullens threw a 13-yard TD pass to Dante Pettis in the second quarter, but couldn't get the ball in the end zone after halftime and finished 18 of 32 for 221 yards and two interceptions.

Looking to cut into a 13-6 deficit, the 49ers settled for a field goal after driving inside the Bucs 1 early in the third quarter.

It was all Tampa Bay after that.

"It's frustrating. We definitely had our chances and didn't take advantage of them," Mullens said. "That starts with me."

San Francisco played without linebacker Reuben Foster, whom the 49ers plan to release after the second-year pro was arrested at the team hotel in Tampa and charged with one count of domestic violence.

Foster was jailed late Saturday night and released on $2,000 bond Sunday. The 2017 first-round draft pick out of Alabama will be placed on waivers officially on Monday.

"We just tried to make sure it wasn't a distraction," Mullens said. "That's how we approached it. I don't think it was."

"Too many things have happened. We tried to help," Shanahan said, adding that Foster likely wouldn't have played anyway because of a hamstring injury.

"I care about Reuben, but nobody is bigger than the team. ... Our No. 1 rule is you got to protect the team, and he has put us in a bad light too much. Hopefully this will fix him and he can be successful somewhere else," Shanahan added.

Winston, who sat out the first three games of the season while serving a suspension for violating the NFL's personal conduct policy, made his first start in a month. He was benched after throwing four interceptions in a loss at Cincinnati on Oct. 28, however Fitzpatrick was not much better protecting the ball in subsequent losses to Carolina, Washington and the New York Giants.

"I don't have anything to prove to anyone. What we have to do is win," Winston said. "The easiest way to win is to keep everything simple and not beat yourself."

Mullens has not played well since his dazzling debut - 16 of 22 passing, 262 yards, three TDs, no interceptions - in a 34-3 victory over the Raiders. He threw two picks in a 27-23 loss to the Giants the following week. Sunday was his first road start.

Buccaneers: LB Lavonte David (knee) and S Justin Evans (toe) remained sidelined for the second straight week. ... T Demar Dotson limped off with a knee/hamstring problem late in the first half and did not return. ... CB Carlton Davis II (knee) was shaken up in the third quarter and sat out the remainder of the game. ... DE Jason Pierre-Paul (knee) left briefly before returning in the fourth quarter.

49ers: at Seattle, next Sunday

Buccaneers: Home vs. Carolina, next Sunday