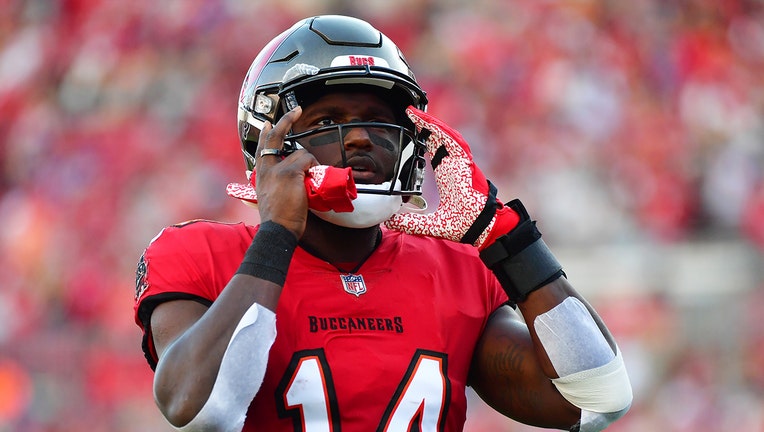 TAMPA, FLORIDA - DECEMBER 12: Chris Godwin #14 of the Tampa Bay Buccaneers adjusts his helmet prior to a game against the Buffalo Bills at Raymond James Stadium on December 12, 2021 in Tampa, Florida. (Photo by Julio Aguilar/Getty Images)

TAMPA, Fla. - Chris Godwin’s excited about Tom Brady’s decision to unretire, as well as all the moves the Tampa Bay Buccaneers are making to position themselves for another Super Bowl run.

That includes the 26-year-old receiver, who’s coming off knee surgery, getting a new multi-year contract less than two weeks after having a franchise tag placed on him for the second straight winter.

"I couldn’t be more thrilled to be back for another three years and do what we’re all here for, which is to chase a ring," Godwin said Monday after officially signing a $60 million deal that includes $40 million guaranteed.

"We’re coming back to try and make it back to the top of the mountain," Godwin reiterated in describing the moves the Bucs have made so far in free agency.

One thing he wasn’t able to predict, though, is when he might be ready to return from torn anterior cruciate and medial collateral ligaments that sidelined him the final three weeks of last season, plus the playoffs.

"I’m doing really well in my recovery. ... Obviously, it’s a long one. I really can’t project too far into the future, so I try to take it day by day — just like I have my entire career," Godwin said at a news conference, flanked by Bucs general manager Jason Licht.

"I like where I’m at right now. I’m confident about this season. I’m excited that we’re getting a lot of the guys back," Godwin added. "It’s a long road here, and I’m ready to be a part of the whole thing."

Since entering the NFL as a third-round pick in the 2017 draft, Godwin has started 47 of 72 career games and has 342 receptions for 4,643 yards and 29 touchdowns. He was a Pro Bowl selection and ranked third in the league in receiving yards in 2019, and he led the Bucs with a career-best 98 receptions last season despite missing most of the final month because of his right knee.

Former Atlanta Falcons receiver Russell Gage and ex-New York Giants safety Logan Ryan agreed to deals with the Bucs in free agency. And the team filled an opening on its offensive line by obtaining veteran guard Shaq Mason from New England in a trade.

All of the moves, aimed at providing the necessary pieces to contend for a second Super Bowl title in three years, have come since Brady ended his 40-day retirement and announced he’ll return to Tampa Bay for a third season.

Godwin said he learned of Brady’s decision in a group text the seven-time Super Bowl champion quarterback sent to him and Evans.

"It’s hard to walk away from the game when you’re as dedicated to it as Tom is," Godwin said. "I would say I’m surprised, but I know him. And I know what this game means to him, and I know how his family feels about it. I’m just happy he’s making the decision that he wants to make. And I’m happy he gets to come back and throw us some passes."

Licht acknowledged Brady’s return has helped in talks to re-sign some of Tampa Bay’s own free agents, as well as in discussions with others around the league. The GM would not speculate on whether the Bucs might try to restructure or extend Brady’s contract, which has one season remaining on it.

"We’ll get to that when we get to it," Licht said. "Right now, we’re focused on what we have, what we need to do here in the next few days."