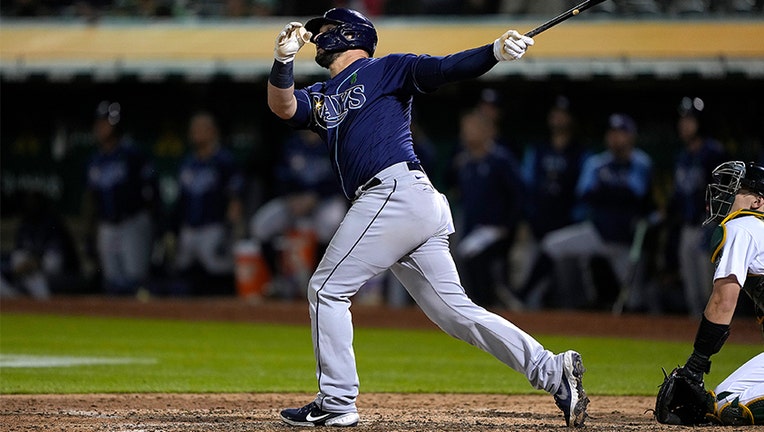 OAKLAND, CALIFORNIA - MAY 03: Mike Zunino #10 of the Tampa Bay Rays hits a two-run home run against the Oakland Athletics in the top of the ninth inning at RingCentral Coliseum on May 03, 2022 in Oakland, California. (Photo by Thearon W. Henderson/Ge

Zunino tied the game with pinch-hit, two-run homer in the ninth inning and Yandy Diaz hit a go-ahead double in Tampa Bay’s five-run 10th to lead the Rays to a 10-7 win over the Oakland Athletics on Tuesday night.

Zunino came up against Kirby Snead with one on and one out in the ninth and Tampa Bay trailing 5-3. Franco said he told Diaz that Zunino was "going to hit a home run" and the prediction came true when the catcher launched the tying drive.

"Getting to that point, everyone’s throwing their hat, trying to call something," Zunino said. "It’s just nice to be able to have a momentum swing there."

The Rays then won it in the 10th against Lou Trivino (0-2), who had a rough outing in his first game back after a two-week stint on the COVID-19 list.

Diaz drove in Harold Ramirez with a drive to right-center to open the 10th. Isaac Paredes broke it open with a two-run single and scored on Manuel Margot’s triple. Zunino added an RBI single as the Rays scored five times off Trivino to seal their fourth series win in their past five.

"We’ve grinded through some series and some games it feels like basically all season long," manager Kevin Cash said. "But this is a feel-good win that you’re able to come out on top coming back. Whatever this month has told us, the guys haven’t changed their thought process whatsoever. It’s a very similar group that knows that they’re capable of doing special things on any given night."

Andrew Kittredge (2-0) pitched a perfect ninth for the win.

Oakland led 5-1 after Kevin Smith hit a grand slam in the first inning, but the A’s didn’t score again until getting two runs in the 10th and lost their fifth straight game.

"Definitely a tough loss," manager Mark Kotsay said. "We had command of the game until the ninth inning. That’s baseball. We couldn’t get the job done to close the game out, which hasn’t happened a lot. We’ve had success in the back end of our bullpen, and unfortunately tonight we just couldn’t finish the game."

Ryan Yarbrough struggled in his belated season debut after a stint on the injured list with a groin injury.

He walked Stephen Piscotty and Christian Bethancourt back-to-back with two outs in the first to force in one run and Smith followed with a towering homer for his first career slam.

Tampa Bay’s Brett Phillips flashed on both sides of the field early in the game. He made a diving catch in right field to rob Cristian Pache of a hit to end the first inning and then hit a two-run homer off Paul Blackburn in the second.

Blackburn got a no-decision, allowing three runs in 4 1/3 innings.

Rays: RHP Phoenix Sanders (lower back spasms) was placed on the 15-day IL to make room on the roster for Yarbrough. ... C Francisco Mejía, on the COVID-19 injured list, caught during a rehab game at the club’s spring training facility in Port Charlotte, Florida, and is expected to join the team later this week in Seattle.

Athletics: INF Nick Allen was sent back to to Triple-A Las Vegas to make room for Trivino on the roster. ... INF Drew Jackson was also reinstated from the COVID-19 IL and returned to Triple-A.

The A’s drew a crowd of 2,815 — which was 327 more than their season low in the series opener Monday night.

The A’s are looking to salvage the final game of their homestand after losing the first five.