Hurricane Ian is almost a Category 5 storm. It has reached a maximum sustained wind of 155 mph, just two mph shy of the Category 5 threshold.

TAMPA, Fla. - Hurricane Ian is jogging closer to the southwest coast of Florida and will make landfall Wednesday.

Despite the track shifting, the massive storm's wind bands will still reach Tampa Bay. It extends past the east coast of the state and to the Atlantic Ocean. The strongest impacts will occur in southwest Florida, flipping those projections from Tampa Bay just over a day ago to the Punta Gorda area. 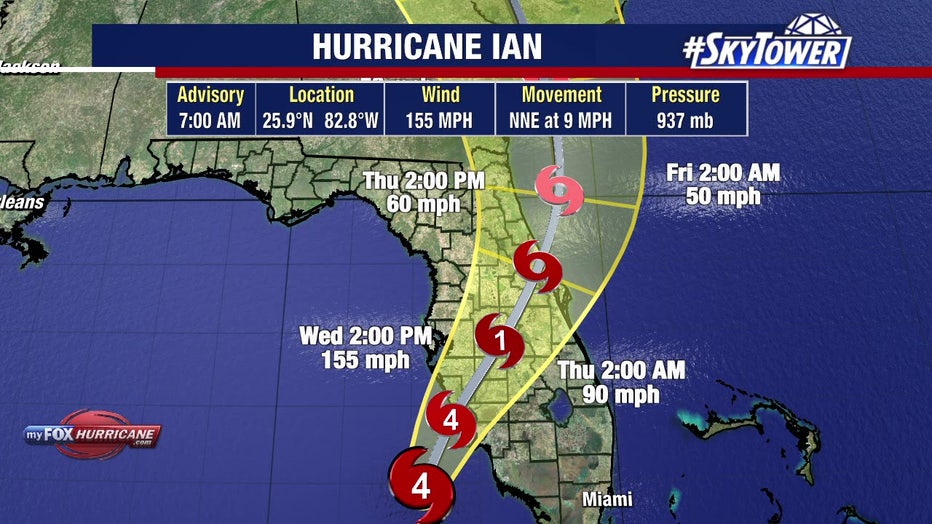 MORE: Where will Hurricane Ian make landfall in Florida? 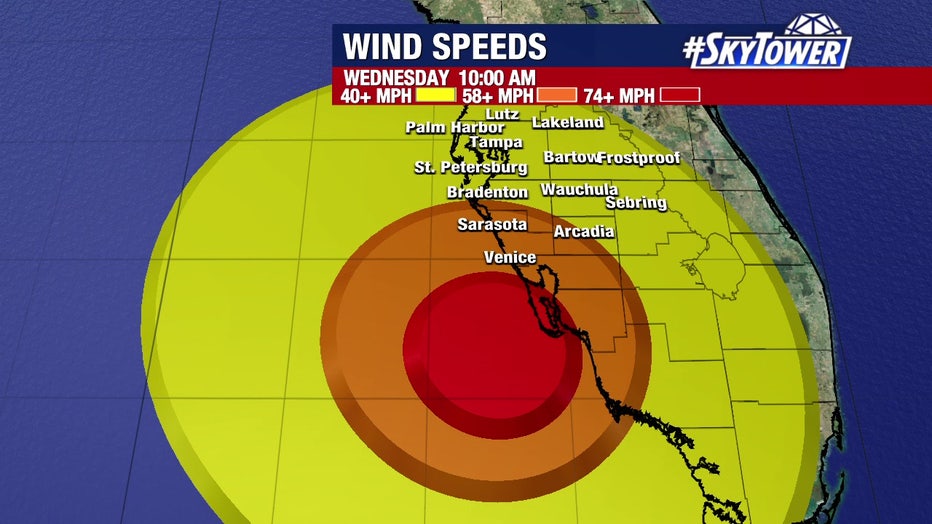 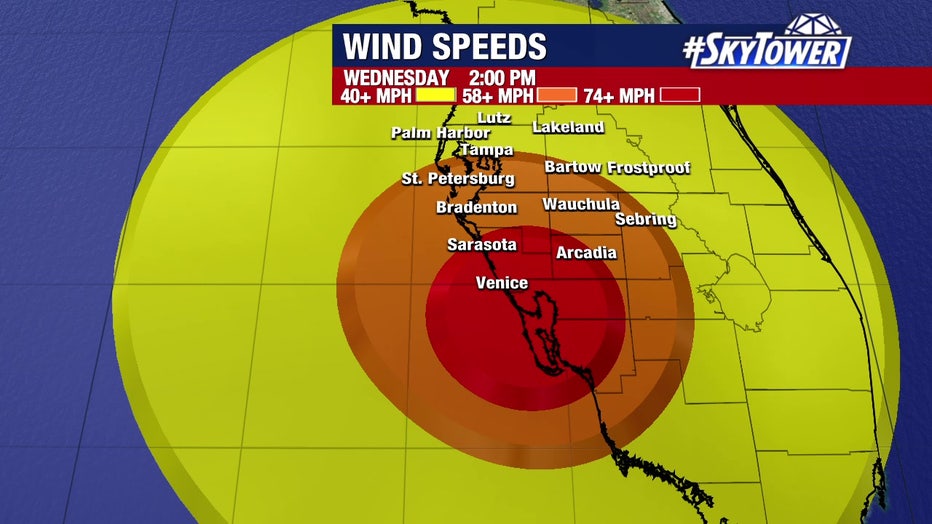 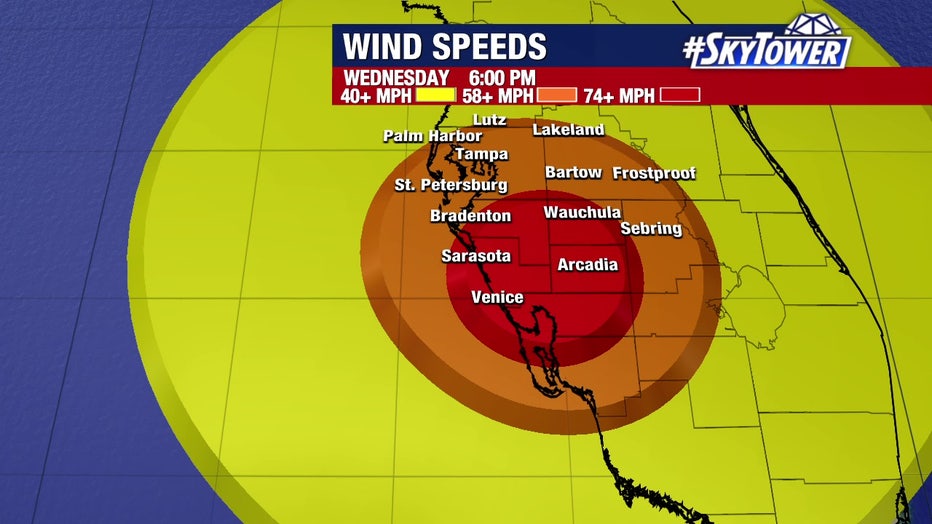 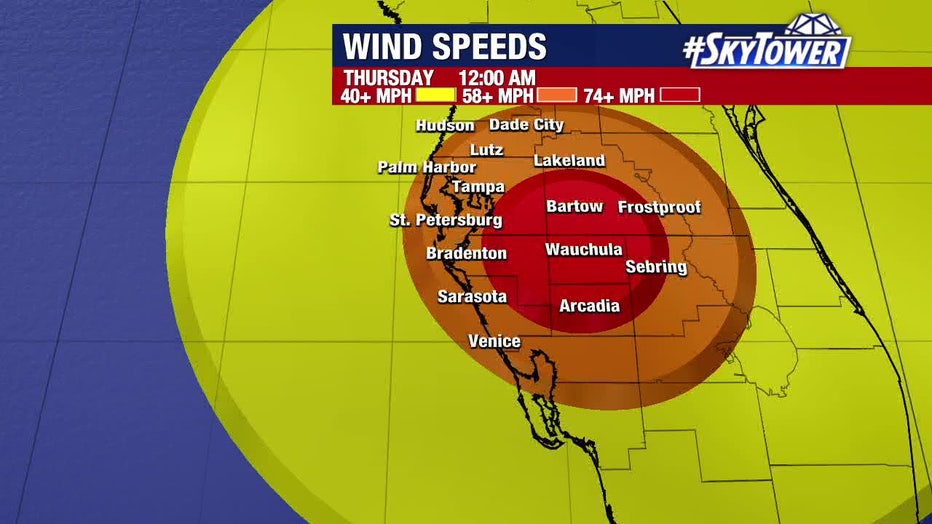 By Thursday morning, we will still have Category 1 in the middle of the state.

"It's all going to be gone by tomorrow – but it's going to be a long-duration event. Maybe 36 hours total," said FOX 13's meteorologist Dave Osterberg. "We're just going to have to deal with this for quite some time. I get it, you're antsy, you're sitting at home, and you probably got all your families together. Just relax. OK? Just relax." 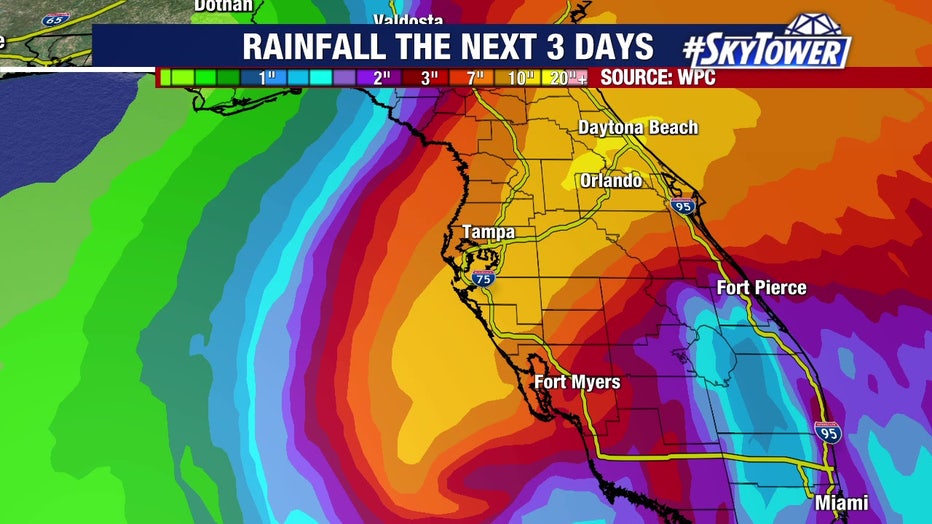 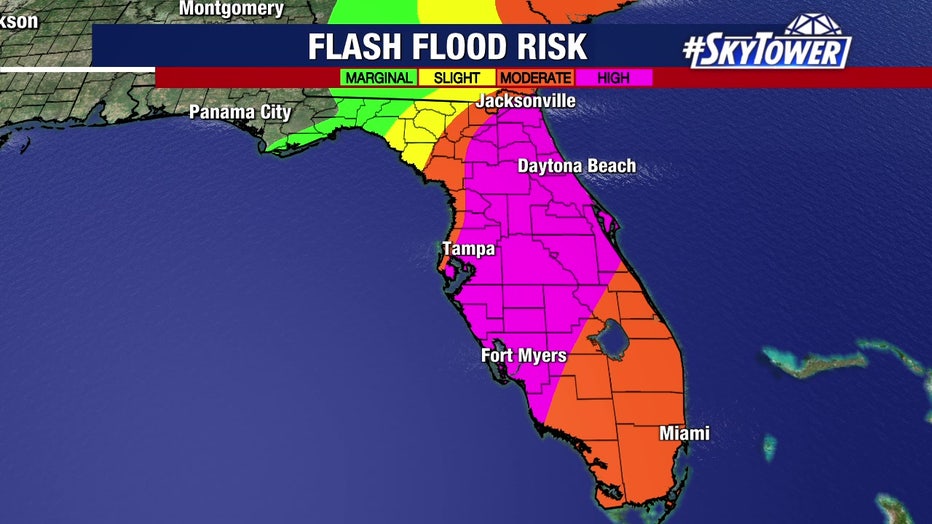 The hardest-hit areas will be Venice and south of it. Inland, the winds will ramp up later Wednesday afternoon and into the night. Widespread power outages are also expected from Citrus County to Lee County.

You can monitor outages on each power company's website: 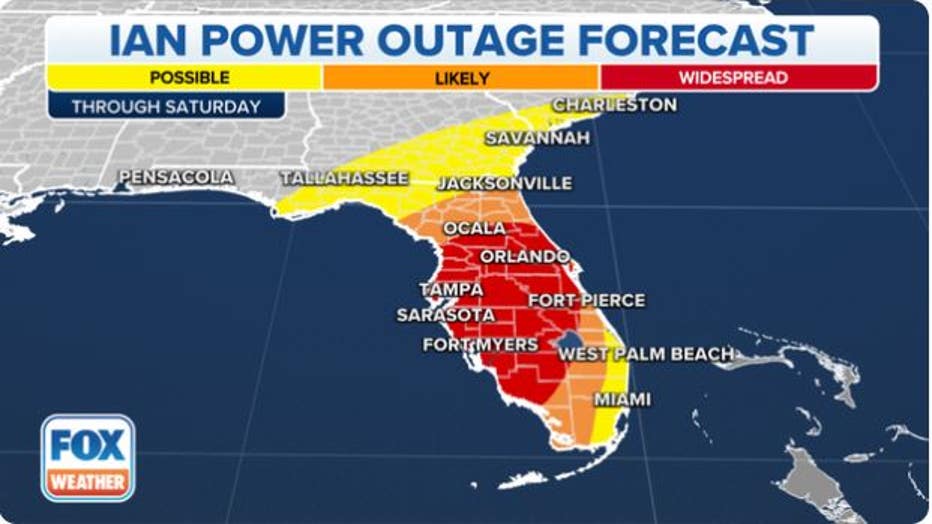 Widespread power outages are expected across Florida due to Hurricane Ian. (FOX Weather)

The interior counties will experience hurricane-force winds of at least 75 mph from Wednesday night into Thursday morning.

There is the potential for isolated tornadoes and between 12-18 inches of rain.

"As these storms spin on shore, you get this little, quick spin-up tornadoes, and they happen so fast sometimes," Osterberg explained. "They drop, and they come back up before we can even tell you about that. So, be wary of them, especially right in the middle of the state – Polk County, Highlands County – later today."

"When you get that much rain, and it's trying to get down into the ground, it weakens the roots for the trees," Osterberg noted. "When you do that and throw a 75 mph wind, what happens? The trees are going to start to go down. That will happen in Polk, Hardee, DeSoto and Highlands counties tonight."

Polk County officials said their area was already saturated leading up to Wednesday. 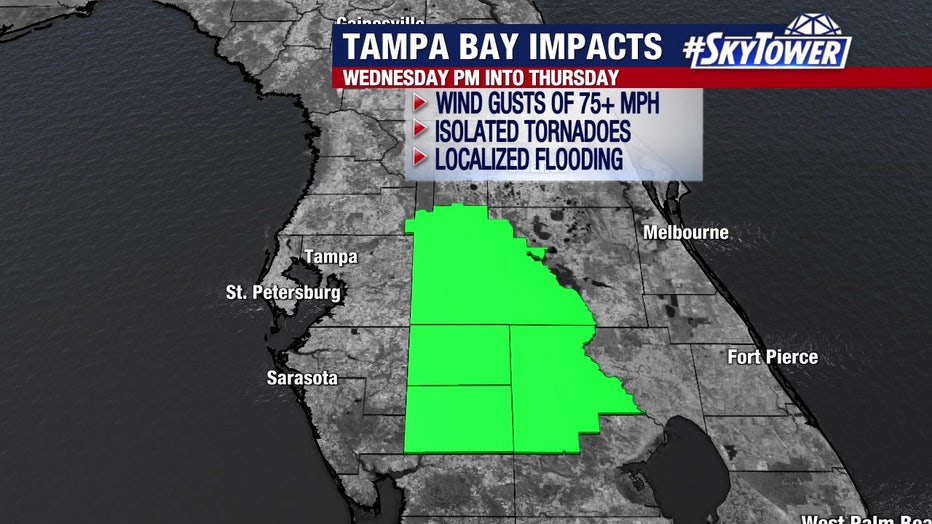 Gusts of at least 70 mph will be felt in these areas. The biggest storm surge will be south of Tampa Bay.

There could be 12-18 inches of rain with the potential for tornadoes.

"A couple of days ago, the track was ‘Hey, Tampa Bay is going to get 10-15 feet storm surge,'" Osterberg said. "Now the track to the south brings the same type of setup we had years ago with Charley." 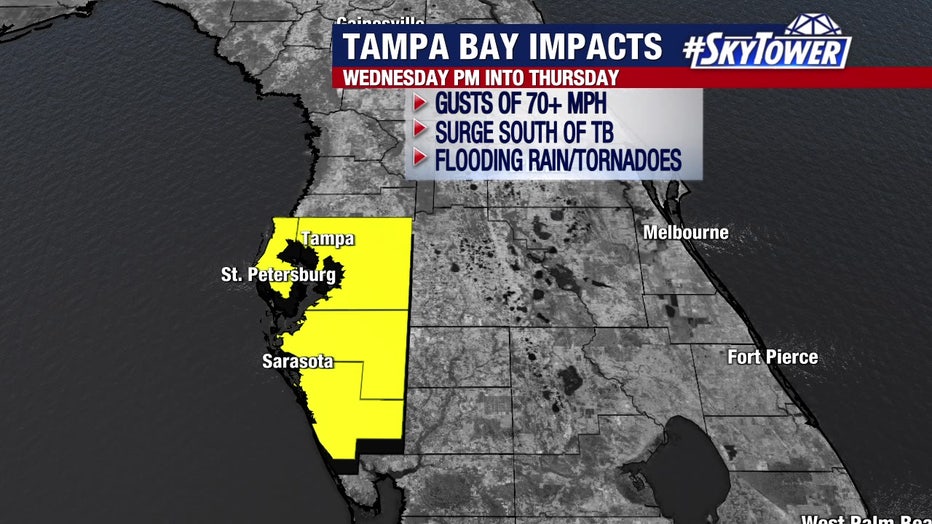 Very little surge is expected here. These three counties could experience wind gusts of over 40 mph with some heavy rain.

Plus, there is a possibility of a tornado. 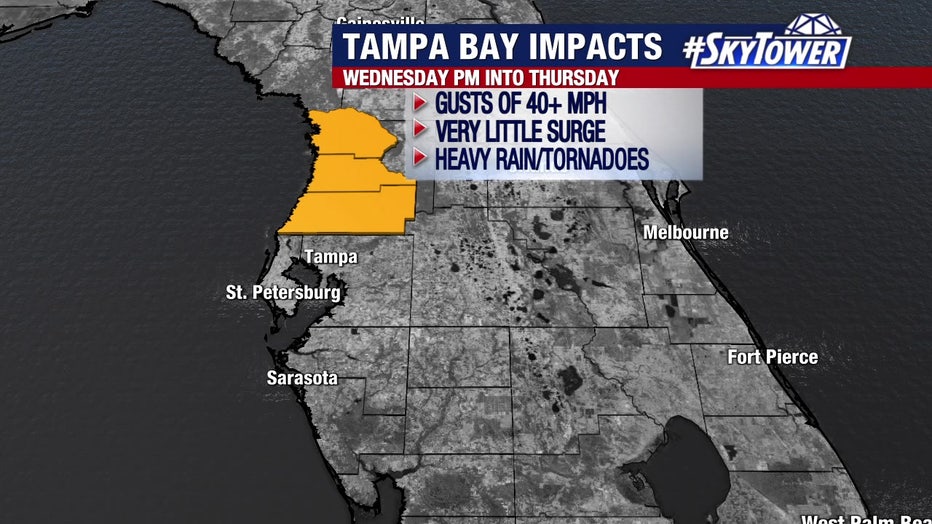 If landfall is made north of Fort Myers, a wall of water will track into its coastal areas. 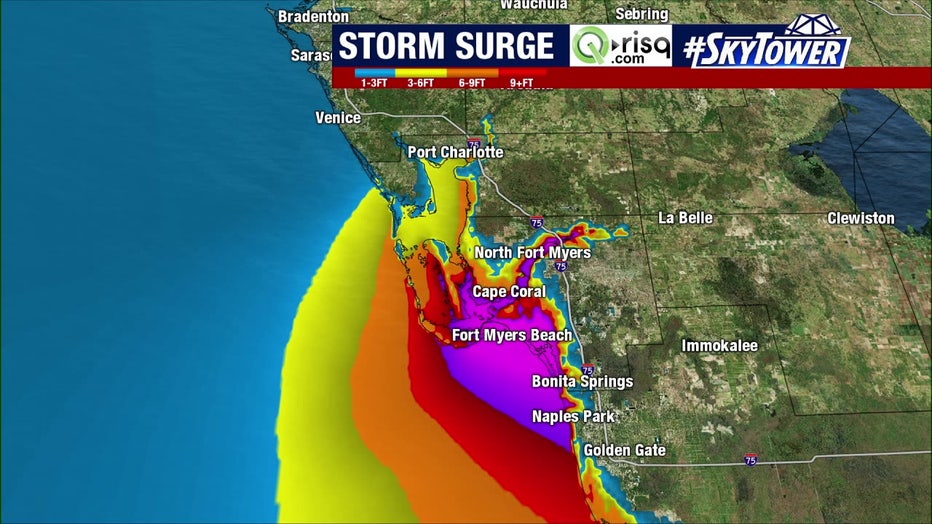 The forecast now calls for a storm surge of 12 to 16 feert from Englewood to Bonita Beach.

Osterberg said many people are looking at the path and immediately think of Hurricane Charley in 2004.

"The hurricane wind field in Ian is almost three times larger than it was in Charley," Osterberg said. "The tropical storm force wind is almost 2.3 times large. It's a much bigger, much stronger, more energy storm. We're going to get more of an impact, especially our inland locations as well."