Meteorologist Tyler Eliasen is keeping an eye on Tropical Storm Zeta, which is expected to strengthen into a hurricane. He says it will likely make landfall somewhere between Louisiana and the Florida panhandle, but poses no threat to the Tampa area.

The storm was nearly stationary, though forecasters said it was likely to shear the northeastern tip of the Yucatan Peninsula or westernmost Cuba by late Monday or early Tuesday and then close in on the U.S. Gulf Coast by Wednesday, but could weaken by then.

The storm had maximum sustained winds of 50 mph (85 kph), and forecasters said Zeta was expected to intensify into a hurricane Monday.

Officials in Quintana Roo state, the location of Cancun and other resorts, said they were watching the storm. They reported nearly 60,000 tourists in the state as of midweek. The state government said 71 shelters were being readied for tourists or residents who might need them.

The government is still handing out aid, including sheet roofing, to Yucatan residents hit by Hurricane Delta and Tropical Storm Gamma earlier this month. 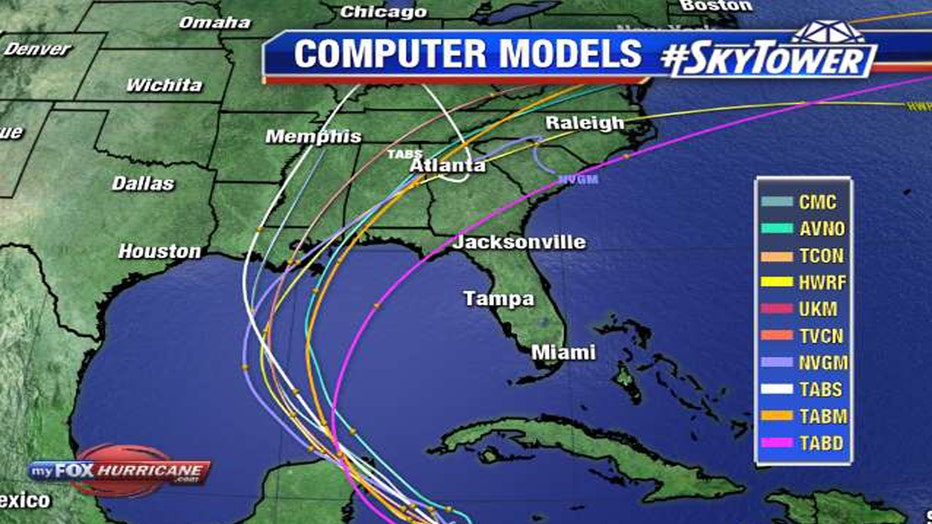 Zeta may dawdle in the western Caribbean for another day or so, trapped between two strong high pressure systems to the east and west. It can’t move north or south because nothing is moving there either, said University of Miami hurricane researcher Brian McNoldy.

“It just has to sit and wait for a day or so,” McNoldy said. “It just needs anything to move.”

When a storm gets stuck, it can unload dangerous downpours over one place, which causes flooding when a storm is over or near land. That happened in 2017 over Houston with Harvey, when more than 60 inches (150 centimeters) of rain fell and 2019 over the Bahamas with a Category 5 Dorian, which was the worst-case scenario of a stationary storm, said Colorado State University hurricane researcher Phil Klotzbach.

While Zeta was over open ocean Sunday, Jamaica and Honduras were getting heavy rains because the system is so large and South Florida was under a flood watch, McNoldy said.

But once Zeta eventually gets moving, it won’t be stalling over landfall, Klotzbach said.

The Hurricane Center said Zeta could bring 4 to 8 inches (10 to 20 centimeters) of rain to parts of the Caribbean and Mexico as well as Florida and the Keys before drenching parts of the central Gulf Coast by Wednesday.

A 2018 study said storms, especially in the Atlantic basin, are slowing down and stalling more. Atlantic storms that made landfall moved 2.9 mph (4.7 kph) slower than 60 years ago, the study found. Study author James Kossin, a government climate scientist, said the trend has signs of human-caused climate change.

Zeta is also in a dangerous place to stall. The western Caribbean is “where storms can cook” and rapidly intensify because of the deep, warm waters, like 2005’s Wilma, Klotzbach said. However, the National Hurricane Center was not forecasting rapid intensification for Zeta.