Rent prices nationwide spiked in August 2022, compared to the same time last year, with the average monthly price of a 1-bedroom at $1,769. Rent.com researcher Jon Leckie shares more on the current rental market.

Rent prices across the United States have skyrocketed in the two years since the COVID-19 pandemic, and residents in many big coastal cities have continued to face higher prices. But there are still many livable cities where renting remains affordable — and even some regions where it’s falling sharply.

Rent.com, an online property rental site, compiled the 100 cheapest cities for renters in the country. Many of the more affordable areas are in the U.S. heartland and some in the South.

The ranking was based on Rent.com’s rental data for one- and two-bedroom units between June 2021 to June 2022. Only cities with populations of 50,000 or higher were included.

Cheap rent can be found in Midwest, South

A total of 21 cities on the cheapest rent list have average monthly rents under $1,000, according to the report.

All cities in the top 41 are in the Midwest and the South. And specifically, Texas had the most cities with the cheapest rent, filling seven of the top 20 spots — all with monthly rents under $1,000.

Overall, the city with the cheapest average rent in the U.S. was listed as Wichita, Kansas, with a population of nearly 400,000. The average rent for all apartment sizes in Wichita is just $598 a month, the report said — adding that no other city averages under $700. 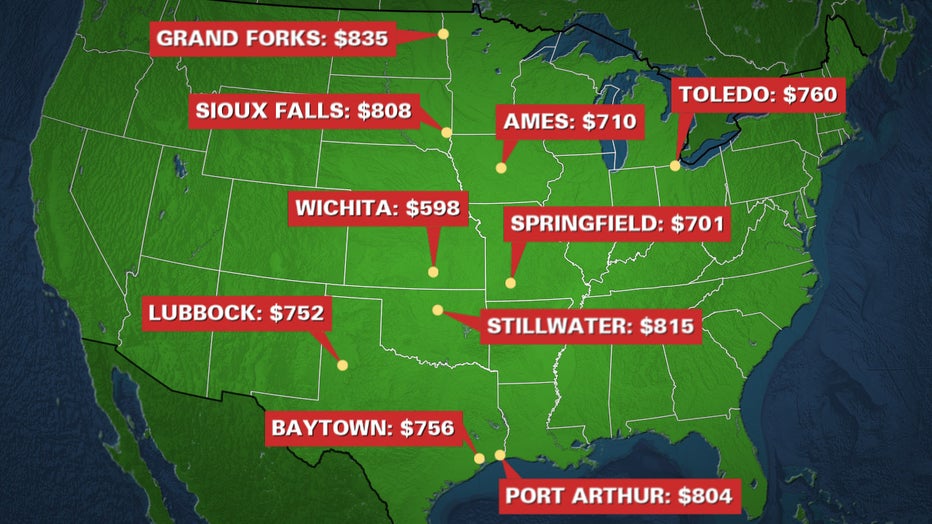 A map shows the top 10 U.S. cities identified as having the cheapest average monthly rent as of June 2022. Only cities with populations of 50,000 or higher were included. (Credit: FOX Television Stations)

Three of the 10 cheapest cities for renters — identified as Port Arthur, Texas, Stillwater, Oklahoma, and Grand Forks, North Dakota – have populations under 56,000. The second-largest city in the top 30 is Toledo, Ohio, which ranked sixth with an average monthly rent of just $760, according to the report.

Out of all the cities on the top 100 list, St. Louis, Missouri, experienced the steepest drop in rent prices anywhere. The average rent among all apartment sizes was $1,425 a month in June 2022, which is a 27.03% drop compared to the same time a year ago. 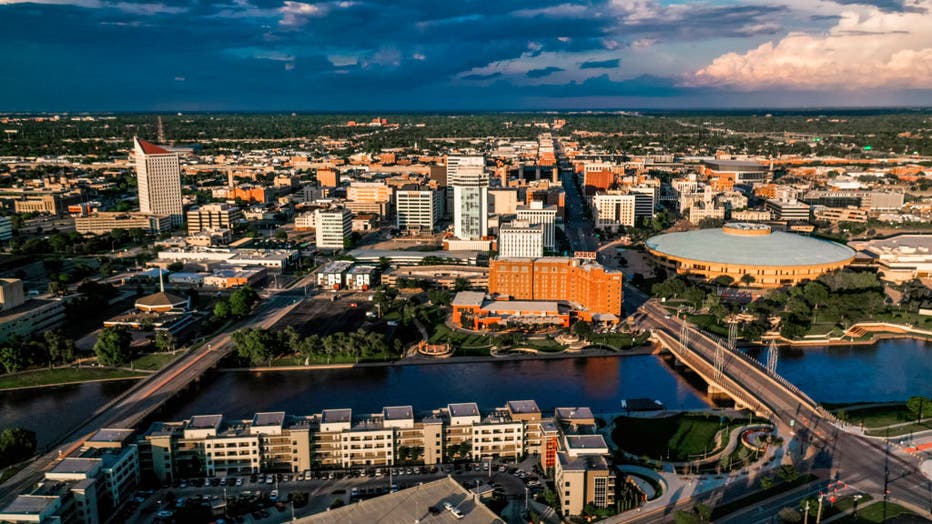 FILE - A drone aerial view of downtown Wichita, Kansas, is pictured in a file image. (Photo by: Joe Sohm/Visions of America/Universal Images Group via Getty Images)

The 10 cheapest US cities for renters

What are the most expensive cities for renters?

Rent.com also shared its list of the most expensive cities across the country to land a rental.

A majority of the cities are located in western or southern U.S. states. Several are also in or near major technology hubs, keeping rents high and apartments in low supply due to the industry’s high salaries and consistent growth during the COVID-19 pandemic, according to Rent.com’s report.

Jersey City, New Jersey, which is located across the Hudson River from Manhattan, ranked as the No. 1 city for the highest rent in the United States during the survey period. The average monthly rent in Jersey City increased from $3,308 in 2021 to $5,500 in 2022, according to the report — which is an increase of 66.25%.

Could renters possibly see some relief amid the ongoing COVID-19 pandemic? Will prices for apartments finally come down? Experts explain

The majority of the cities with the highest rent (58%) are on the West Coast. Out of the top 100 cities, 41% are in California. Another 28% of the most expensive cities for renters are in the South — and a majority of the southern cities (57%) are in Florida.

The Northeast had just 13% of the 100 cities with the highest rent in the U.S., including Bayonne, New Jersey, Cambridge, and Quincy, Massachusetts.

RELATED: Despite high rent, it’s still cheaper than buying a home – except in these cities