RICHMOND, Va. - A time capsule from 1887 that workers were searching for since September has possibly been located, Virginia Gov. Ralph Northam announced on Dec. 17.

The capsule may contain Confederate artifacts, a news release said.

Workers disassembling the pedestal that formerly held the Robert E. Lee statue said they found an object in the earth that looked "different" and started chiseling down on the object with a hammer.

Crews found what appeared to be the top of a time capsule, the news release continued.

The top of a square box embedded in a 2,000-pound (900-kilogram) granite block was revealed and appeared "largely undamaged."

Preservation teams were called in to remove the object carefully, the news release continued.

"Historians believe a time capsule was placed in the cornerstone of the Lee pedestal on October 27, 1887. Records from the Library of Virginia suggest that 37 Richmond residents, organizations, and businesses contributed about 60 objects to the capsule, many of which are believed to be related to the Confederacy," the news release said. Richmond, Virginia was also formerly known as the Confederate capital, according to Virginiahistory.org.

If it is determined the object is a time capsule, it will be taken to the Department of Historic Resources and opened by experts to "maintain the integrity of the artifacts" that may be inside.

"It looks like it is (the time capsule)," said Clark Mercer, Northam’s chief of staff. "We’re hoping it hasn’t been damaged by water over the last 100-plus years."

The massive bronze equestrian statue of Lee, erected in 1890, was taken down in September, more than a year after Northam ordered its removal after protests over racism and police brutality erupted across the country following the police killing of George Floyd in Minneapolis. The day after the statue was removed, work crews spent more than 12 hours searching for the time capsule in the 40-foot-tall (12-meter-tall) pedestal but were unable to locate it. 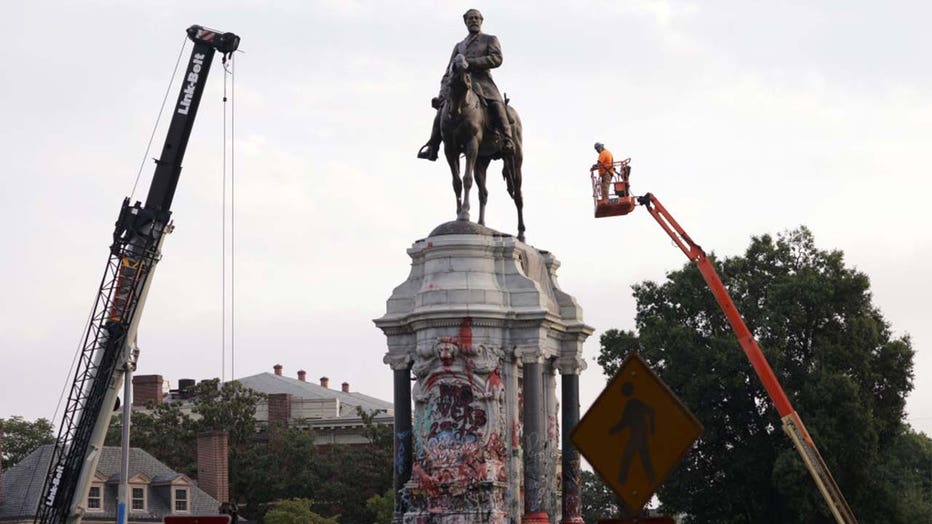 FILE - Workers observe the statue of Robert E. Lee at the Robert E. Lee Memorial prior to its removal Sept. 8, 2021 in Richmond, Virginia.

A newspaper article from 1887 suggests the capsule contains Civil War memorabilia and a "picture of Lincoln lying in his coffin," although historians believe it’s doubtful the picture is an actual photograph, which would be rare and valuable.