Ian Benjamin Rogers, 45, and Jarrod Copeland, 37, each face multiple charges including conspiracy to destroy by fire or explosive a building used or in affecting interstate commerce, prosecutors said.

SACRAMENTO, Calif. - Ian Benjamin Rogers had five illegal pipe bombs and nearly 50 weapons at his home and shop in California’s wine country, a "ThreePercenters" bumper sticker on his vehicle, a "white privilege card" at his house, and text messages that led federal prosecutors to charge him with conspiring to firebomb the state Democratic Party headquarters in Sacramento.

His attorney admits his client is in serious trouble, but said Friday that the alleged plot was nothing more than drunken talk between two buddies inflamed by the defeat of former president Donald Trump.

"Firebombing your perceived political opponents is illegal and does not nurture the sort of open and vigorous debate that created and supports our constitutional democracy," U.S. Attorney Stephanie Hinds said in announcing the unsealing of an indictment Thursday in San Francisco federal court.

Also charged is Jarrod Copeland, 37, of nearby Vallejo, who was arrested Wednesday and for whom no attorney is yet listed.

Rogers, 45, has been in custody on related state charges since mid-January, when the FBI in an affidavit said he sent text messages that agents interpreted as threats against the offices of Democratic Gov. Gavin Newsom and social media companies Facebook and Twitter.

A Napa businessman found to have a huge arsenal of weapons and explosives is being held on $5 million bail as authorities try to determine his intentions.

The new indictment alleges their first intended target was the Democratic Party headquarters, one of a series of planned attacks they hoped would prompt a burgeoning movement of those upset with Trump’s defeat.

"I want to blow up a democrat building bad," Rogers wrote, according to the indictment, to which Copeland responded, "I agree" and "Plan attack."

"Let’s see what happens after the 20th we go to war," Rogers wrote, which prosecutors said meant they intended to begin acts of violence after President Joe Biden was inaugurated on Jan. 20.

"Heads must be taken," Copeland wrote at one point, according to the court documents. "I don’t like to think it but I think we will have to die for what we believe in." 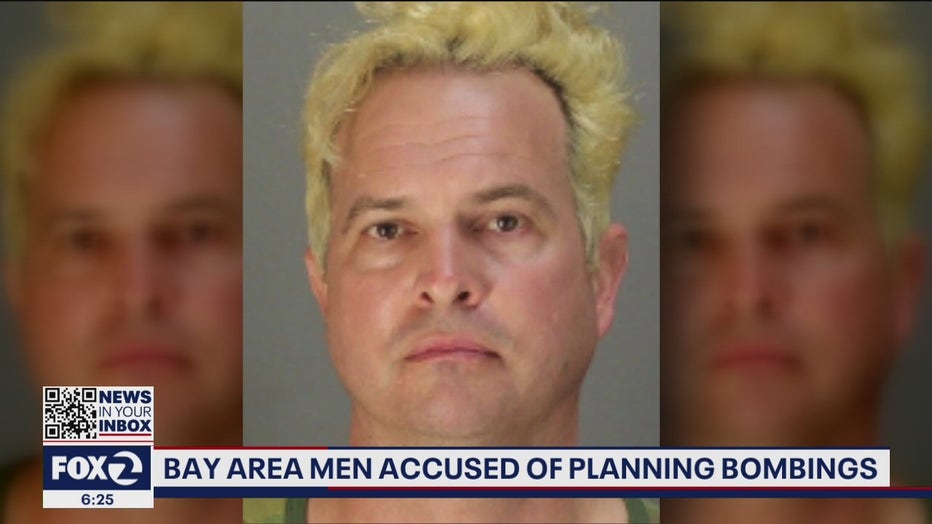 In November, prosecutors say Rogers used an encrypted messaging application to tell Copeland that he would "hit the enemy in the mouth" by using Molotov cocktails and gasoline to attack targets including the Governor’s Mansion and the state party headquarters.

Before switching targets, they initially focused on the unoccupied Governor's Mansion because "its empty no casualties," Rogers wrote and Copeland agreed, according to court documents. "Would send a message."

Prosecutors also say that in late December 2020, Copeland told Rogers he contacted an anti-government militia group to gather support for their movement. After Rogers’s arrest, they say Copeland communicated with a leader of a militia group who advised Copeland to delete his old messages and switch to a new communication platform.

"The so-called conspiracy was a lot of drunken talk and bluster between two friends who share the same political beliefs, but it was no more than that," countered Rogers’ defense attorney on the Napa County charges, Jess Raphael.

Ian Benjamin Rogers is a harmless Trump supporter who collects guns and pipe bombs but isn't a threat, his attorney said Thursday.

His client is a mechanic who has an auto repair shop and likes to tinker with things, he said.

That includes building the pipe bombs that Raphael said were safely stored, built long before the recent unrest, and that Rogers intended to take camping with his kids to blow up a stump or make dirt fly.

Rogers began collecting the 49 firearms seized from his home in 2008 and bought no new firearms recently, Raphael said. But he acknowledged his client is in serious trouble for turning several of them into machine guns and altering others to violate California’s definition of illegal assault weapons.

Investigators also pointed to the "ThreePercenters" bumper sticker on Rogers's vehicle, signaling support for an anti-government movement named after the belief that just 3% of American colonists defeated the British during the American Revolution. Raphael said he got it at a barbeque at a local shooting range.

"That bumper sticker was about the extent of Mr. Rogers’s participation," he said. "He wasn’t an active participant in any (ThreePercenters) activities."

Rogers does belong to a group of survivalists who call themselves 3UP, he said, a group that the Anti-Defamation League identifies as a similarly named Three Percent United Patriots militia that among other things aspired to protect the border with Mexico from illegal immigration.

"Many extreme anti-government militias are populated by white supremacists," according to the FBI affidavit.

Agents also seized a "white privilege card" that looks like a credit card. "Trumps Everything" it says beneath the label, with the number 0045 repeated as a credit card number signaling the 45th U.S. president. "Scott Free" is listed as the cardholder, a member from "birth" through "death." Raphael said it was a "joke card" someone sent to him.

The two men each face multiple charges, including conspiracy to destroy a building used in or affecting interstate commerce.

Copeland was arrested Wednesday and made an initial court appearance Thursday.

He had no prior criminal record, prosecutors said, but twice deserted from the military in 2014 and 2016 before being discharged in lieu of court martial.

If convicted on all charges, each defendant faces a maximum of 20 years in prison, officials said.

But Raphael insisted the two men just liked to get drunk, play video games and spout off, and never followed through with any preparation like scouting trips or other planning.

"You know, talking about ‘We need to get 50,000 people to follow us,’ and ‘Let’s wait and see what Trump does and then we’ll act,’ a lot of that stuff,’" Raphael said. "We should go do this, we should go do that. ‘We’ll call ourselves the Wolverines.’ It was really just bluster."

The pair repeatedly signed off their messages with the exclamation "Wolverines!," prosecutors said.

That's a reference to the 1984 movie "Red Dawn," in which Colorado high school students use guerilla tactics to resist a communist invasion, naming themselves after their school mascot.

The signature line, prosecutors said, shows "both their lack of maturity and how deeply threatened they feel, which is a volatile combination."