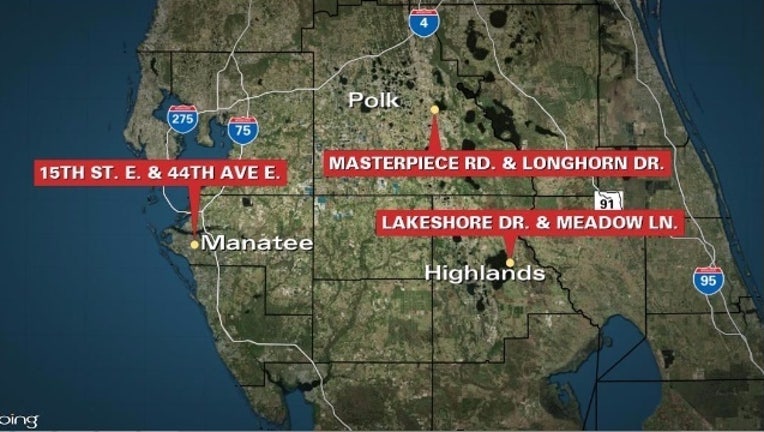 In Polk county, deputies say 56-year-old Leonard Wimberly Jr. was riding his three-wheeled bicycle westbound along Masterpiece Road, just east of Longhorn Drive in Lake Wales, when he was hit by a truck also traveling westbound.  It happened just after midnight. The truck did not stop.

Wimberly was transported to Lake Wales Regional Medical Center, but he did not survive.  The truck left behind a side mirror, and deputies believe it belongs to a Dodge 2500 or 3500 pickup.

In Manatee county, the Florida Highway Patrol says a hispanic man - who has yet to be identified - was walking in the area of 15th Street East and 44th Avenue East shortly before 4:30 Saturday morning.  He was walking in the roadway, and troopers say a vehicle hit him and left the scene before the FHP arrived.  The man did not survive.

In Highlands county, the Florida Highway Patrol is investigating another deadly crash involving a pedestrian.  Troopers say 20-year-old Steven Arnold of Lorida was walking in the roadway in front of a home on Lakeshore Drive near Meadow Lane, when a vehicle traveling northbound on Lakeshore hit him and kept on going.  He died at the scene.

Anyone with information about these deadly crashes is urged to call law enforcement.

If you have a tip for Polk County Deputies - call Heartland Crime Stoppers at 1-800-226-TIPS or log onto www.P3tips.com to submit your tip via the web.

To reach the Florida Highway Patrol Troop F for Manatee and Highlands Counties, call 239-938-1800 or dial *FHP on your mobile phone.