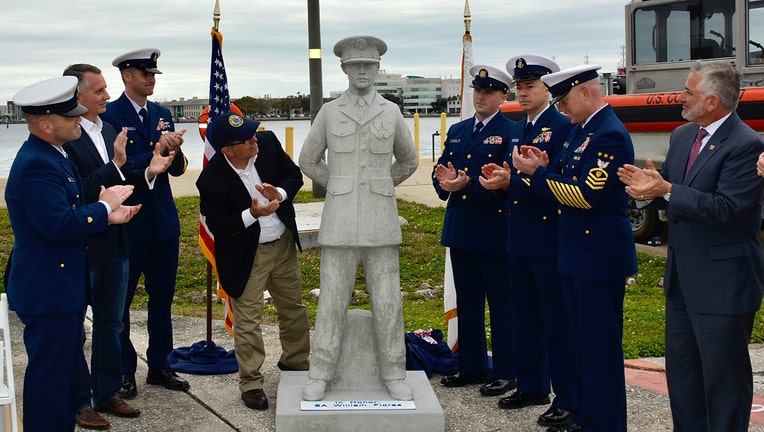 ST. PETERSBURG, Fla. - A new statue honoring a hero of the USCGC Blackthorn tragedy was unveiled today before being added to a unique underwater memorial off the coast of Pinellas County.

U.S. Coast Guard Seaman Apprentice William R. Flores was among those killed in the 1980 accident in the waters of Tampa Bay. The Blackthorn collided with the tanker SS Capricorn, killing 23 crew members aboard the Blackthorn.

The collision was the Coast Guard’s worst peacetime disaster, but the death toll could have been higher, if not for Flores. The 18-year-old saved the lives of many crewmates by not abandoning ship after the collision and using his own belt to strap open the lifejacket locker door.

Because of the heroic act, “there is no doubt that he belongs in the Circle of Heroes,” Capt. Matthew Thompson of the U.S. Coast Guard said Monday.

The statue of Flores was dedicated at a ceremony at the U.S. Coast Guard’s Sector St. Petersburg. It will be among several added to the Circle of Heroes memorial that was installed off the coast of Pinellas County last year.

The underwater sculpture park serves both as a therapeutic diving destination for wounded warriors and an artificial reef that will help sustain marine life in the gulf waters.

You'll need your scuba gear to visit the underwater dive memorial off the shore of Tarpon Springs. It's where you can pay your respects for the men and women who have served our country.

“It’s a very heartwarming experience to see this statue unveiled. It’s been in the process for a few months. it’s a work of art,” exclaimed William Flores’ brother, Sam. “I think it’s a great idea, it’s a healing situation for war-time veterans who can dive and need that assistance to heal from whatever they are going through.”

A memorial to the entire Blackthorn crew in St. Petersburg hosts a ceremony marking the tragedy each year.