Confirmed deaths rose to 90 Sunday as search efforts continue in Surfside, Florida. This comes one week after a demolition to the remaining structure.

SURFSIDE, Fla. (AP) - Authorities searching for victims of a deadly collapse in Florida said Sunday they hope to conclude their painstaking work in the coming weeks as a team of first responders from Israel departed the site.

Miami-Dade County Mayor Daniella Levine Cava said 90 deaths have now been confirmed in last month's collapse of the 12-story Champlain Towers South in Surfside, up from 86 a day before. Among them are 71 bodies that have been identified, and their families have been notified, she said. Some 31 people remain listed as missing.

The Miami-Dade Police Department said three young children were among those recently identified.

Crews continued to search the remaining pile of rubble, peeling layer after layer of debris in search of bodies. The unrelenting search has resulted in the recovery of over 14 million pounds (about 6.4 million kilograms) of concrete and debris, Levine Cava said.

Miami-Dade Fire Chief Alan Cominsky said it was uncertain when recovery operations would be completed because it remains hard to know when the final body would be found.

When the recovery phase began Wednesday, officials were hoping it could be done within three weeks. In an interview Sunday morning near the site, Cominsky said it might now be as few as two weeks, based on the current pace of work.

"We were looking at a 14-day to 21-day timeframe," he said, adding that the timeline remained "a sliding scale." 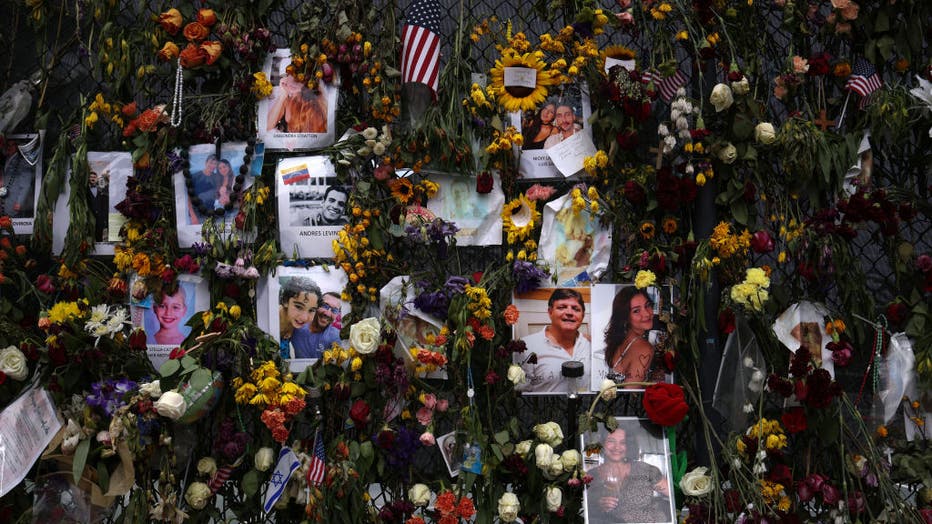 Surfside Mayor Charles Burkett stressed the care that rescue workers are taking in peeling back layers of rubble in hopes of recovering not only bodies but also possessions of the victims. He said the work is so delicate that crews have found unbroken wine bottles amid the rubble.

"It doesn’t get any less difficult and finding victims, that experience doesn’t change for our search and rescue folks," he said. "It takes a toll, but you’ve got to love the heart that they’re putting into this and we’re very grateful."

On Saturday night, members of the community walked along Collins Avenue, the city’s main thoroughfare, to celebrate the crews that have come from across the country — and as far as Israel and Mexico — to help in the rescue, and now recovery, effort. The Israeli search and rescue team arrived in South Florida shortly after the building collapsed on June 24 and was heading home Sunday.

Members of the crews that have been searching the site 24 hours a day since the collapse lined both sides of the street, shaking hands and bidding farewell to the Israeli team.

The Israeli team joined other task forces from around the United States to assist first responders from Miami and Miami-Dade County, working in 12-hour shifts. They have searched through South Florida's intense summer heat, and in pouring rain, pausing only when lightning was spotted nearby. They also paused operations as officials made plans to implode the still-standing portion of the condo tower on July 4.

The Israeli team used blueprints of the building to create detailed 3D images of the disaster site to aid in the search. They also gathered information from families of the missing, many of who were Jewish, to build a room-by-room model laying out where people would have been sleeping during the pre-dawn collapse.

Levina Cava said the memorial walk on Saturday night was "a beautiful moment." She gave the keys to the county to the Israeli commander and colonel — her first two handed out as mayor.

Four teams from Florida, Indiana and Pennsylvania are still dedicated to the recovery effort, Cominsky said. Teams from Virginia, New Jersey and Ohio are preparing to leave.

"To give you an answer when we feel we’ll recover everyone, I can’t give you an exact date," the fire chief said. "We’re doing everything that we can -- everything possible -- until we feel that we’ve delayered every floor."