MYAKKA, Fla. - For the past several years, Dusty Crum – also known as The Wildman – has been on the hunt for pythons, invasive creatures in the Everglades.

"This is the most important hunt that Florida has," he told FOX 13.

Dusty and his team just came home from competing in Florida's 2020 Python Bowl, where more than 750 people from 20 states competed.

"This big snake happened to be crossing the road and I had a good spotter in the back of the truck," recalled Dusty.

Its unique skin caught the eye of Dusty's girlfriend and teammate, Natalee McKinney. 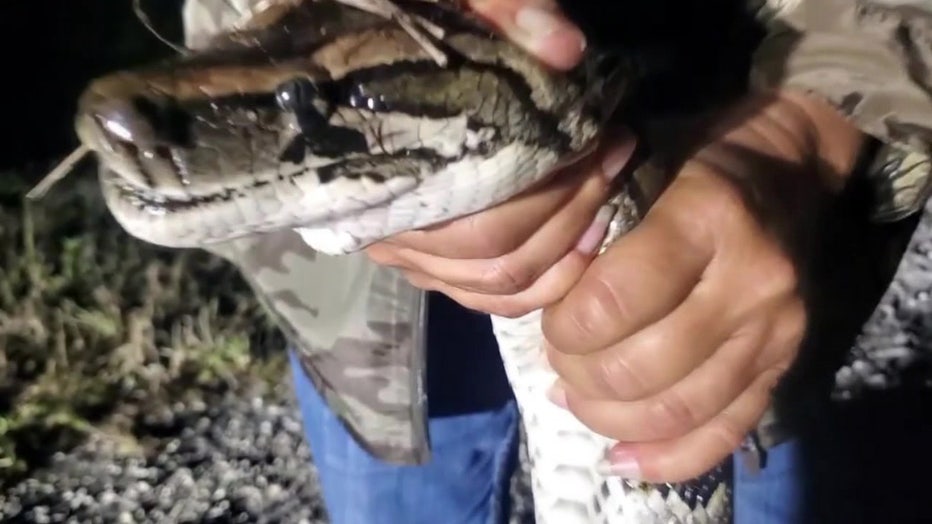 "It was laying stretched out across the road the first night of the hunt. Once you spot them, you know what you're seeing," she said.

The pair bagged the 35.9-pound python at night.

"This snake had just eaten a meal,” recalled Dusty. “I bagged it up and I took it out of the bag to take a picture and it regurgitated a big wood stork that it had just ate.”

That's the main reason why these hunts are held. Florida wildlife continue to remain at risk as the invasive snakes slither around.

"You see them they’re gobbling up our native wildlife, like our migratory birds, and you see something like that and it really hits home," he said.

Dusty's hunts are followed on TV by the Discovery Channel with 'Guardians of the Glades.'  Off TV, Dusty and Natalee work to make sure no snake is wasted.

"We do boots, we have belts, bracelets, purses, clutches, men's wallets, card cases," she said. 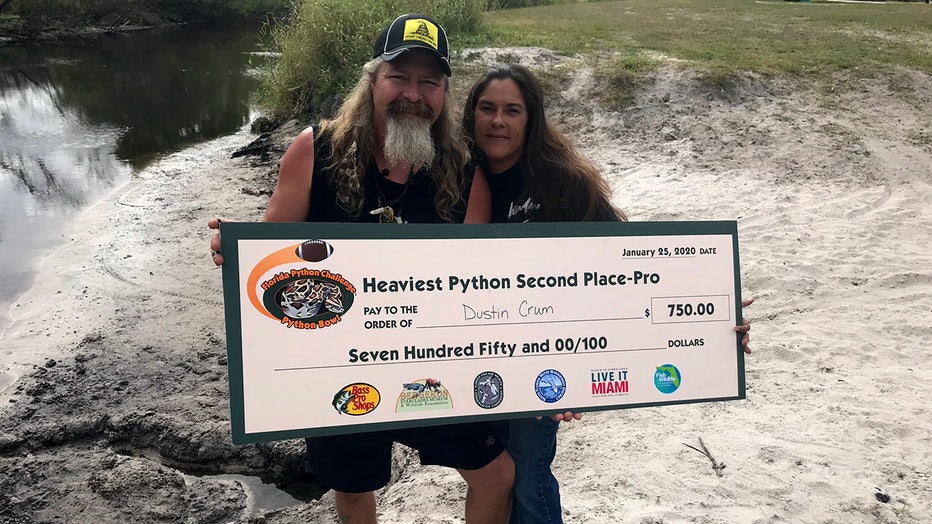 Eighty pythons were captured, five by Dusty's team. They took second place for the heaviest python, but their real reward comes from helping Florida's native wildlife.

"We actually have seen some fox squirrels last week in the levy that we haven’t seen in five years,” he said. “Maybe there is a chance that we are taking some pressure off our native animals and some wildlife is getting to be restored to the area.”

Editor's Note: Previous information provided by the Florida Fish and Wildlife Conservation Commission said the python weighed 9 pounds. That was incorrect and the story has been updated to reflect the reptile's actual weight, which is 35.9 pounds. The video containing the reporter's package has not been updated.