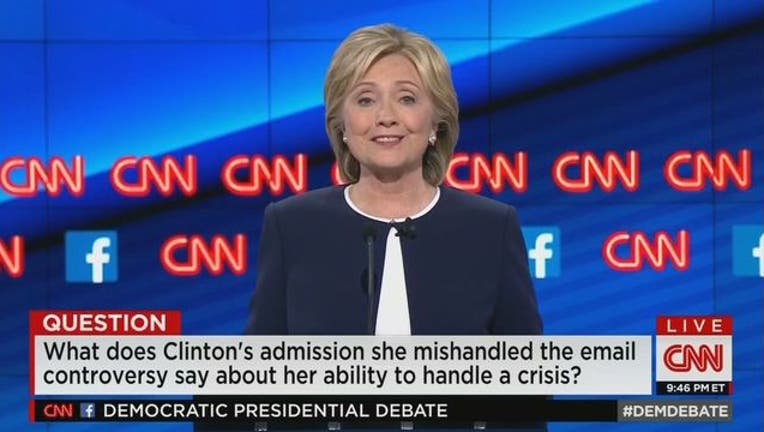 LAS VEGAS (AP) - Forceful and confident in debate, Hillary Rodham Clinton may have heartened jittery Democrats who've spent the summer worrying that her mishandling of the email controversy demonstrates more fundamental problems with her campaign and political skills.

And her strong performance Tuesday night just might be enough to spark second thoughts among one of her biggest potential threats: Vice President Joe Biden, who continued deliberating whether to enter the race as he watched the debate at his home at the Naval Observatory in Washington.

Perhaps conscious of the threat Biden could pose, Clinton sought to defuse questions about her record by portraying herself as President Barack Obama's natural successor, the person he turned to when looking for his first secretary of state. When asked how she'd differ from Obama, Clinton mildly noted that she would be the first woman president if elected.

Much of the forum amounted to a referendum on Clinton's nearly quarter century in politics: Her vote for the Iraq war, shifts to the left on issues like trade, the private email server she used while secretary of State and her foreign policy judgment. She defended herself but acknowledged that everyone on stage had "changed a position or two" during their political careers.

One of the most notable moments came when Sen. Bernie Sanders of Vermont, her most formidable opponent, rose to her defense on her much-criticized use of a private email server as secretary of state.

"The American people are sick and tired of hearing about your damn emails," said Sanders. "Enough of emails."

"Thank you Bernie," said Clinton, as the two shook hands_a moment that immediately ricocheted across the Internet.

A veteran of 25 presidential debates in the 2008 race, Clinton cut a practiced figure on the stage, seeking to create the kinds of memorable moments that can set electoral narratives.

Clinton aides have long pointed to the debate as a turning point for the campaign, an opportunity to move past their summer slump and boost them into the more intense fall primary.

Still, with nearly four months before the first round of primary voting and over a year before Election Day, many questions remain.

Even with Sanders dismissal of the email issue, Clinton faces a slow-drip of email news, a result of a court order mandating daily releases of her correspondence right up to three days before the Iowa caucuses. Later this month, she's scheduled to testify before the House committee investigating the deadly attacks on the American mission in Benghazi, an appearance that will be fraught with partisan fire.

The Democratic base has shifted left during the eight-years of Obama's administration. Clinton, at times, has struggled to keep pace with her party. In the past two years, she's changed long-held positions on gay marriage, the Cuban embargo, drivers licenses for undocumented immigrants and the Keystone XL pipeline. Days before the debate, she announced her opposition to the Trans-Pacific Partnership, the sweeping trade accord that she once called the "gold standard."

But she also quickly tried to undercut Sanders' image as a liberal icon, seeming to catch him a bit by surprise with a swift attack on his mixed record on gun control legislation in the early moments of the debate. When asked whether he'd been tough enough on the issue as a senator, she said simply: "No. Not at all." Sanders said it was a complicated issue. Clinton said, "I was in the Senate at the same time. It wasn't that complicated to me."

The two-hour debate at the Wynn hotel presented a stark contrast to the early forums of the Republican field, ten-candidate brawls that revealed a party grappling with deep ideological divides over immigration, foreign policy and civil liberties.

The Democrats presented a far more unified front_arguing more about their personal pasts than the direction they'd each take the country. Unlike the Republicans, all largely supported their leadership in Washington, criticizing the president rarely and carefully.

While Clinton passed her first test, there will be more to come. The candidates have five more primary debates on the calendar, and several of the contenders are pushing for more match-ups.

"Well, I am in the middle, here, and lots of things coming from all directions," Clinton said under barbs and questions Tuesday night.

But she concluded, "I am still standing."