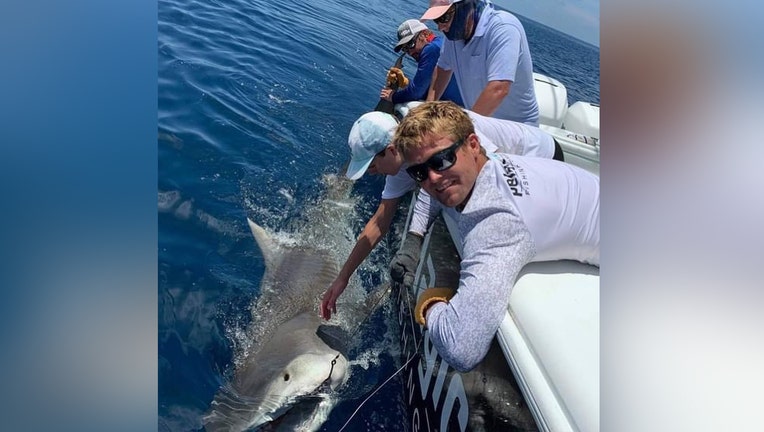 SARASOTA, Fla. - When Michael and Nicholas Braun traveled from Montana to Sarasota on vacation, they never imagined they would come face to face with one of the largest sharks ever caught off Florida’s Gulf Coast.

It happened on Saturday when the father and son set off on a sportfishing charter with Pelagic Color Fishing Company in hopes of catching a few ‘monster fish’.

The boat’s captain, Jonathan ‘Hollywood’ McPherson, took the pair to D6, a public reef off the coast of Sarasota, where he caught two goliath grouper.

The day before, two area fishermen told McPherson that they caught two rainbow runners at the reef. Rainbow runners are known to travel with large sharks so the captain set down a 30-pound barracuda as bait in hopes of reeling one in.

After some time, the line pulled tight and Nicholas Bruan tried to hold steady and reel in his catch, but the 3/8" cable snapped. 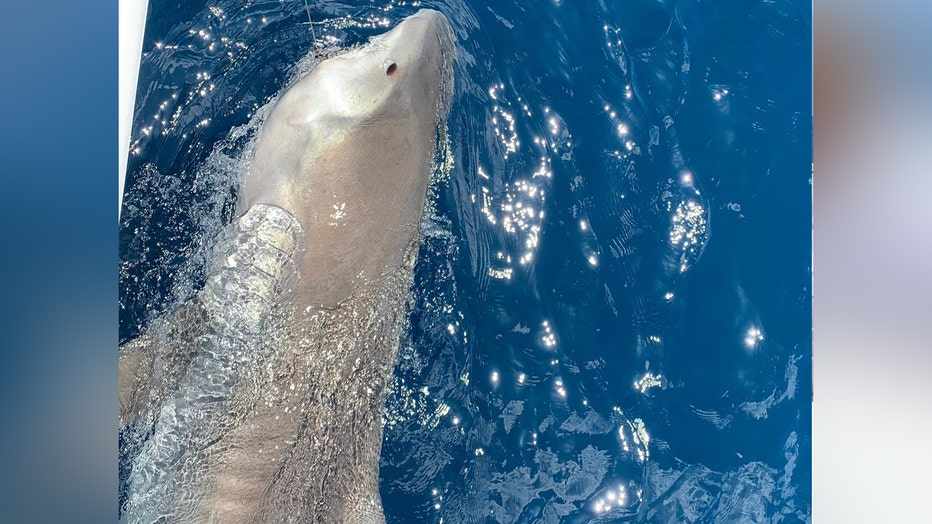 In awe of such a strong line being severed, McPherson sent a second baited line down and within five minutes, an epic fight began as the line went tight again. Nicholas Braun held on for as long as could and then his father took over.

"We set out on a six-hour ‘Pelagic Monsters’ fishing trip," Michael Braun explained. "We hooked two massive goliath groupers, then reeled in the largest tiger shark I’ve ever seen. One of the craziest fishing experiences of my life, Pelagic Color delivers on the promise of monster fishing!"

The ‘monster fish’ was a 13-foot, 900-pound, pregnant tiger shark, which was one of the largest sharks ever caught off the Gulf Coast of Florida, according to the Pelagic Color Fishing Company.

The canals of Buttonwood Harbour aren't usually home to sharks, but hundreds of bonnethead, lemon, and nurse sharks trying to survive red tide have found themselves gathered there indefinitely.

"I thought it might be another grouper," McPherson shared. "After a few circles, it came up and we were shocked. After reeling in a massive shark, I put on my gloves and we measured it against the side of the boat. Completely stoked, I caught my biggest shark ever today – a 150" female tiger shark estimated at over 900 pounds. The belly was huge. She was clearly pregnant."

The Pelagic Color Fishing Company says the near record-breaking tiger shark, along with the two goliath groupers caught earlier that day were all safely released. 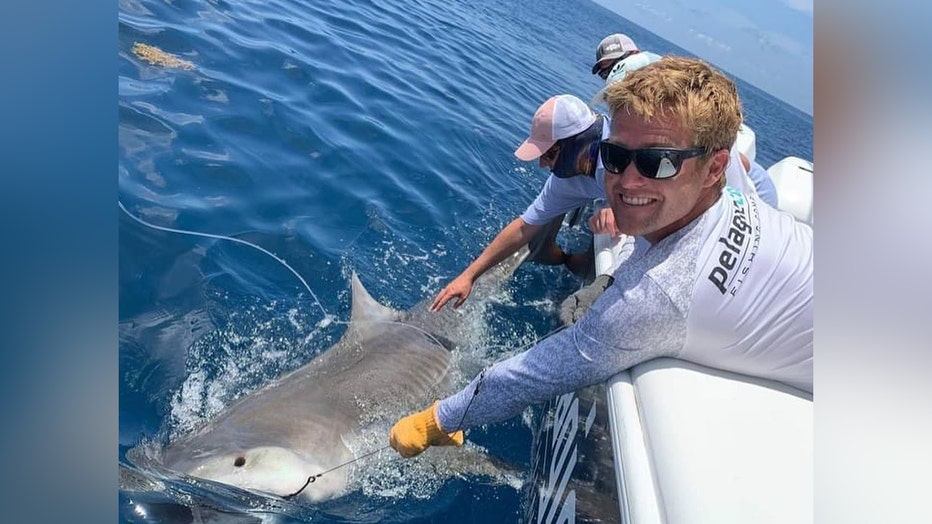 The tiger shark is reported to be responsible for a large share of fatal shark-bite incidents and is regarded as one of the most dangerous shark species. They often visit shallow reefs, harbors, and canals, creating the potential for human interaction.

The Pelagic Color Fishing Company added that despite red tide in the bay and along the coastline, it has not impacted their business because they go further out into the gulf where the water is clear.