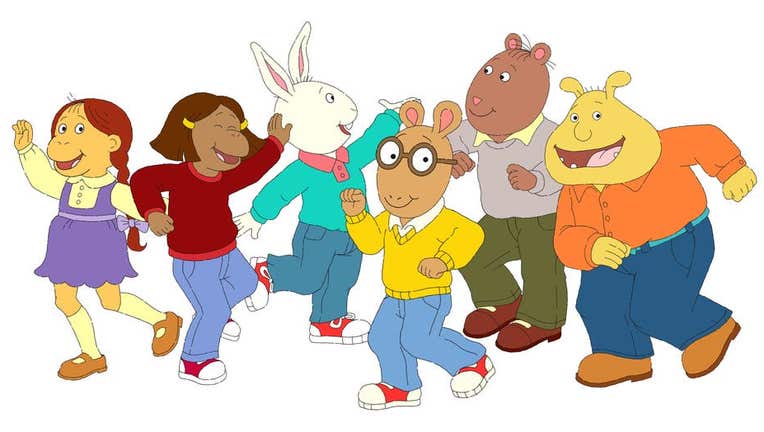 ARLINGTON, Va. - After 25 seasons, the PBS Kids animated show "Arthur" is coming to an end this week — and offering fans a glimpse at what the beloved characters will be like as adults.

Arthur and his friends first appeared on air in October 1996. Since then, the bespectacled, advantageous aardvark navigated life with his family, friends and school — pushing the boundaries of animation and teaching viewers about different cultures and family backgrounds.

The end of the series was announced last year. But current fans (and potential future fans) will still be able to watch all 25 seasons of "Arthur" on PBS Kids. The network celebrated the special 25th anniversary with a marathon and four new episodes, "which culminate in a much-anticipated ending that gives a glimpse into what’s in store for the future of these beloved characters."

The four brand-new episodes air on Monday, Feb. 21 on PBS stations and stream free on PBS KIDS, concluding the show’s 25th and final television season. The new episodes show Arthur and his friends solve a mystery, see a silent movie, find out what it’s like to be a reporter, learn how to help a grieving friend, go on a family vacation, and get a hint of their futures from a mysterious fortune-telling game, according to the network.

Despite not producing new episodes, PBS Kids said new content will still be available in the form of a podcast, video shorts that cover "timely and compelling topics," as well as digital games.

"For more than 25 years, Arthur and his friends have kept viewers learning and growing through their true-to-life experiences," Sara DeWitt, PBS Kids’ senior vice president and general manager, said in a statement. "We can’t wait to debut these episodes and introduce new ARTHUR content that will give fans more ways to engage with their favorite aardvark."

Turn your Zoom into a FOX cartoon

Backgrounds from "The Simpsons," "Family Guy" and more shows are available.

The animated series holds the title of the longest-running animated children's series in television history. Since it first aired, Arthur engrained his legacy in the minds and hearts of several generations and even became the basis of several internet memes.

The most popular Arthur meme took the internet by storm with a screengrab of Arthur clenching his fist accompanied by captions that describe moments of frustration.

Based on Marc Brown’s "Arthur Adventure" book series, the show detailed Arthur’s life in Elwood City as he faced issues related to culture, class and even same-sex marriage.

In a 2019 episode, Arthur examined the same-sex marriage between his teacher, Mr. Ratburn, and Patrick, the local chocolatier, in an episode titled "Mr. Ratburn and the Special Someone." The episode was boycotted by Alabama Public Television and they refused to air the show.

In 2020, a series of digital short "Arthur" videos sought to give parents and families tools to discuss pressing issues like the importance of hand-washing and wearing a mask during the pandemic, learning and talking about racism in society, and encouraging everyone to participate in elections.

Arthur has won four Daytime Emmy Awards for Outstanding Children’s Animated Program, a Peabody Award and other honors over its 240-episode run.

This story was reported from Cincinnati. Skyler Rivera contributed from Los Angeles.