Stranded travelers look for light at end of cancelation tunnel

TAMPA, Fla. - Lines of passengers anxious to get home continued to form at Tampa International Airport’s Spirit counter Friday. As the airline’s cancellation debacle stretched into its sixth day, the airport reported a total of 148 Spirit cancellations as of 3 p.m.

Meghan Sullivan, who has been stuck in Tampa for several days, finally gave up Friday and bought a Southwest ticket out of pocket.

Sullivan says she received a credit on her flight from Spirit instead of a refund.

"Them just giving me a credit for the future is kind of a waste to me because I don’t want to fly with them again," explained Sullivan.

Attorney Dale Appell says, it’s on the passengers to know what rights they have within their airline reservations when it comes to refunds and credits.

"The airline isn’t required to tell you that, so it’s important to know," he shared. "If a flight is canceled, whether it be for mechanical or weather, they’re entitled to a refund." 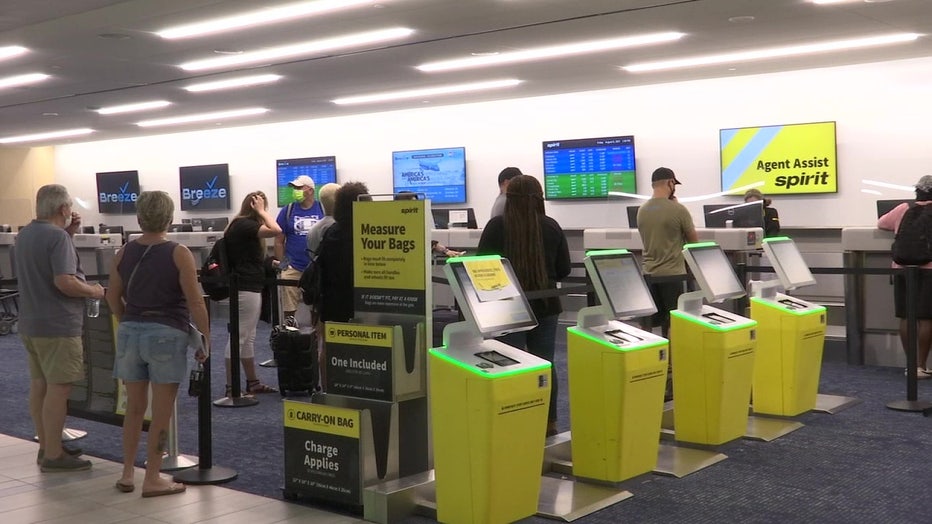 The U.S. Department of Transportation states you’re entitled to a refund, but when it comes to other expenses, it depends on the airline.

"All of those are covered by your individual contract with the airline," Appell added. "Every airline is different."

FOX 13 read through Spirit Airline’s "Contract of Carriage" to get the details. According to the contract, with "limited exceptions, the airline will not reimburse guests for flights they book on other carriers."

So if you rebook on Delta, for example, Spirit is probably not picking up that tab. They also will not assume expenses due to a cancellation.

But it does say in the case of cancellation of their doing, if they can rebook you the next day, they may offer overnight hotel accommodations for non-local guests.

Still, Appell says, asking for a refund is worth a try.

"Since a lot of the determination is made by someone at the gate, the old saying of ‘you get more flies with honey than vinegar’ applies here," he said. "Certainly be patient with them, they’re under a lot of stress, and they have a lot of discretion about things like vouchers and hotels."

Legislation was introduced during the 115th and 116th U.S. Congresses the last several years to create an official "Passenger Bill of Rights." It was introduced by Democratic Senator Richard Blumenthal. Under his bill, the airlines would be required to offer a refund and rebook you on another flight, even if it was on a different airline.

However, the bill never made it to the Senate floor.

In a statement to FOX 13 News today, Sen. Blumenthal stated, "Spirit’s fiasco illustrates the urgent need for significantly stronger consumer rights for air passengers.  When airlines are at fault for delays and cancelations, passengers should have their flights swiftly rebooked and tickets refunded. These and other essential protections in my Passengers’ Bill of Rights are long-  overdue to protect consumers and restore sanity to the skies."

The senator is planning on reintroducing the legislation this Congress.