"We’re just trying to sandbag the house to stop some potential flooding from coming in," resident Robert Mocsary said.

Mocsary rented a U-Haul truck at the last minute to transport sandbags. He’s one of several people who spent Saturday with a shovel in hand filling up bags with sand at W.H. Jack Mitchell Jr. Park in Pasco County.

"We’re just going to tie them up because we’re running out of time with the rain coming again and then we’ll help my aunt put them down. She’s elderly so just trying to give her a hand," Mocsary shared.

The park is one of the four Pasco County sandbag locations. Each site is self-service and open 24/7. The county provides the bags, but residents must bring a shovel. 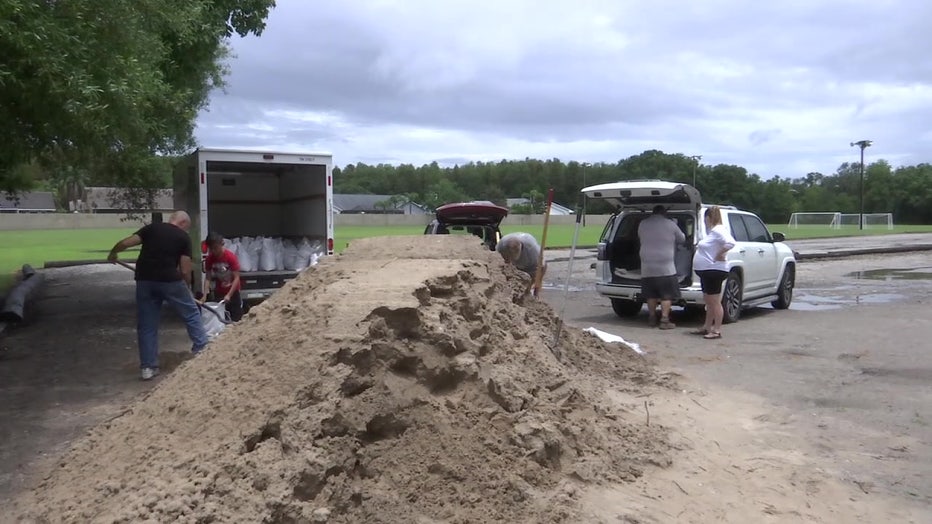 We’re really encouraging residents that now is the time to prepare," Pasco County Emergency Management Interim Director Laura Wilcoxen said. "There’s a lot of uncertainty with this storm’s forecast right now. So before the Fourth holiday tomorrow, today is a great day to start putting together your disaster supply kit."

Wilcoxen says since Hurricane Irma, the county encourages residents to have enough food and supplies to last 14 days unlike the normal 72 hours. That’s means having at least one gallon of water per person, per day.

"We have time as the storm starts making its way up toward the peninsula. It’s right before July 4th. I know everyone is planning on having their parties so be set now," Wilcoxen said.

In Brooksville, a self-service sandbag is open at Linda Pedersen Park located at 6300 Shoal Line Boulevard in Spring Hill.

The city of Pinellas Park opened multiple self-service sandbag sites for residents only on Saturday.  Locations will be open Saturday, July 3, 2021, 12:00-5:00 p.m. and Sunday, July 4, 2021, 8:00 a.m. - 5:00 p.m. Residents can get up to 10 sandbags each and must show a water bill and/or valid driver's license indicating they are a resident of Pinellas Park to receive their sandbags. Locations include: