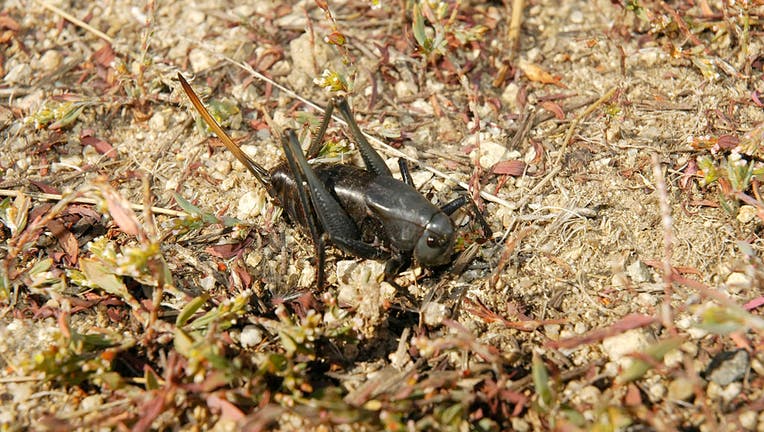 ARLINGTON, Ore. (AP) - Driving down a windy canyon road in northern Oregon rangeland, Jordan Maley and April Aamodt are on the look out for Mormon crickets, giant insects that can ravage crops.

"There’s one right there," Aamodt says.

They’re not hard to spot. The insects, which can grow larger than 2 inches (5 centimeters), blot the asphalt.

Mormon crickets are not new to Oregon. Native to western North America, their name dates back to the 1800s, when they ruined the fields of Mormon settlers in Utah. But amidst drought and warming temperatures — conditions favored by the insects — outbreaks across the West have worsened.

The Oregon Legislature last year allocated $5 million to assess the problem and set up a Mormon cricket and grasshopper "suppression" program. An additional $1.2 million for the program was approved earlier this month.

It’s part of a larger effort by state and federal authorities in the U.S. West to deal with an explosion of grasshoppers and Mormon crickets that has hit from Montana to Nevada. But some environmental groups oppose the programs, which rely on the aerial spraying of pesticides across large swaths of land.

Maley, an Oregon State University Extension Agent, and Aamodt, a resident of the small Columbia River town of Arlington, are both involved in Mormon cricket outreach and surveying efforts in the area.

In 2017, Arlington saw its largest Mormon cricket outbreak since the 1940s. The roads were "greasy" with the squashed entrails of the huge insects, which damaged nearby wheat crops.

Rancher Skye Krebs said the outbreaks have been "truly biblical."

"On the highways, once you get them killed, then the rest of them come," he explained. Mormon crickets are cannibalistic and will feast on each other, dead or alive, if not satiated with protein.

The insects, which are not true crickets but shield-backed katydids, are flightless. But they can travel at least a quarter of a mile in a day, according to Maley.

Aamodt fought the 2017 outbreak with what she had on hand.

"I got the lawnmower out and I started mowing them and killing them," she said. "I took a straight hoe and I’d stab them."

Aamodt has organized volunteers to tackle the infestation and earned the nickname "cricket queen."

"We had all those high-value crops and irrigation circles," he explained. "We just had to do what we could to keep them from getting into that."

In 2021 alone, Oregon agricultural officials estimate 10 million acres of rangeland in 18 counties were damaged by grasshoppers and Mormon crickets.

Under the new Oregon initiative, private landowners like farmers and ranchers can request the Oregon Department of Agriculture (ODA) survey their land. If ODA finds more than three Mormon crickets or eight grasshoppers per square yard it will recommend chemical treatment. In some areas near Arlington surveyed in May soon after the hatch there were 201 Mormon crickets per square yard.

State officials recommend the aerial application of diflubenzuron. The insecticide works by inhibiting development, preventing nymphs from growing into adults. Landowners can be reimbursed for up to 75% of the cost.

Diana Fillmore is a rancher participating in the new cost-sharing initiative. She says "the ground is just crawling with grasshoppers" on her property.

ODA recommended she treat her 988-acre ranch in Arock in southeastern Oregon. As the program’s protocol calls for applying insecticide to only half the proposed area, alternately targeting swaths then skipping the next one, this means nearly 500 acres of her land will actually be sprayed.

"It was horrible," Fillmore said. "Grasshoppers just totally wiped out some of our fields." She was forced to spend $45,000 on hay she normally wouldn’t have to buy.

Landowners must act quickly if they decide to spray diflubenzuron as it is only effective against nymphs.

"Once they become adults it’s too late," Adams said.

Oregon’s new program is geared toward private landowners. But the federal government owns more than half of Oregon’s total land, and the U.S. Department of Agriculture has its own program for outbreaks on Western public land.

The U.S. government’s grasshopper suppression program dates back to the 1930s, and USDA’s Animal and Plant Health Inspection Service (APHIS) has sprayed millions of acres with pesticides to control outbreaks since the 1980s.

APHIS National Policy Director William Wesela said the agency sprayed 807,000 acres (326,581 hectares) of rangeland across seven Western states in 2021. So far this year, it has received requests for treatment in Oregon, Idaho, Montana, Utah, Nevada and Arizona, according to Jake Bodart, its State Plant Health Director for Oregon.

In a 2019 risk assessment APHIS recognized the main insecticide used, diflubenzuron, remains "a restricted use pesticide due to its toxicity to aquatic invertebrates," but said risks are low.

APHIS says it follows methods to reduce concerns. It instructs pesticide applicators to skip swaths and apply the insecticide at lower rates than listed on the label.

But environmental groups oppose the program. Last month, the Xerces Society for Invertebrate Conservation and the Center for Biological Diversity (CBD) sued APHIS in the U.S. District Court in Portland. In their filing, they accuse APHIS of harming rangeland ecosystems and not adequately informing the public about treatment areas.

They also allege the agency violated the National Environmental Policy Act by not assessing all the alternatives to pesticides or analyzing the cumulative effects of the program.

Federal officials declined to comment on the suit because it is pending before courts.

Environmentalists say the reduction of grasshoppers diminishes the food source of other wildlife that prey on them.

"We’re very concerned about the impact of these broad, large sprays to our grassland and rangeland ecosystems," said Sharon Selvaggio, the Xerces Society’s Pesticide Program Specialist.

Selvaggio added the sprays can be "toxic to a wide variety of insects" beyond grasshoppers and Mormon crickets, expressing particular concern for pollinators such as bees.

The two environmental groups want the agency to adopt a more holistic approach to pest management, by exploring methods such as rotational grazing.

"We’re not trying to stop APHIS from ever using pesticides again," said Andrew Missel, staff attorney at Advocates for the West, the nonprofit law firm that filed the suit. "The point is really to reform" the program, he added.

In Arlington, the "cricket queen" Aamodt said residents had experimented with pesticide alternatives. During 2017, some covered trees in duct tape to trap the insects. The following year, local officials brought in goats to graze hillsides.

For now, those fighting against future infestations hope the new state program will bring much-needed support.

"Keep in mind that these are people that are taking time out from their own lives to do this," said OSU Extension Agent Maley. "The volunteers made a huge difference."