Watch: Speaking at Delaware State University, Biden blasted Republicans in Congress for criticizing student loan relief when some of them have had millions of dollars in pandemic relief loans forgiven.

WASHINGTON - The Biden administration plans to ask the Supreme Court to reinstate the president's student debt cancellation plan, according to a Thursday legal filing warning that Americans will face financial strain if the plan remains stalled in court when loan payments are scheduled to restart in January.

The Justice Department is fighting to keep Biden’s plan alive after it was halted by two federal courts in recent weeks. The agency is asking for quick action to block both rulings and allow the plan to take effect even as it plays out in the nation’s courts.

In a legal filing Thursday, the administration announced plans to appeal one of those rulings, by a federal appeals court in St. Louis, to the nation’s highest court. And it says it’s prepared to appeal the other case if needed. 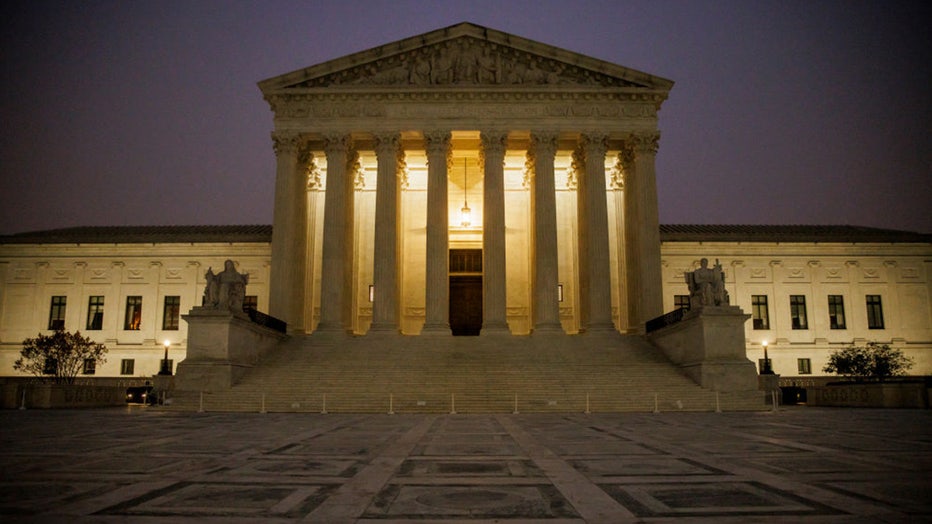 FILE - The U.S. Supreme Court is seen in the early morning hours of Nov. 4, 2022, in Washington, DC. (Samuel Corum/Getty Images)

The White House has said it will prevail, but even some supporters of the plan worry about its chances before a conservative Supreme Court that has scaled back Biden’s authority in other ways, including in a June decision curbing the Environmental Protection Agency’s ability to limit power plan emissions.

Biden’s plan promises $10,000 in federal student debt forgiveness to those with incomes of less than $125,000, or households earning less than $250,000. Pell Grant recipients, who typically demonstrate more financial need, are eligible for an additional $10,000 in relief.

Keeping the debt relief on hold would leave the government with an "unnecessarily perilous choice," the administration argued in its filing. If it restarts student loan payments as planned on Jan. 1, millions of Americans will get billed for debt that was promised to be canceled. But if the government extends the payment pause, it will cost billions of dollars in lost revenue.

It builds on arguments the administration made in other filings this week, warning that many Americans won't be able to pay their student debt bills in January if the cancellation plan remains halted.

For typical borrowers, monthly payments would be $200 to $300 higher than they would be if Biden’s plan goes through, the Education Department said. The strain could lead to soaring default rates, which have increased by an average of twentyfold in the wake of other natural disasters.

"We anticipate there could be a historically large increase in the amount of federal student loan delinquency and defaults as a result of the COVID-19 pandemic," Education Undersecretary James Kvaal said in a Tuesday filing. "This could result in one of the harms that the one-time student loan debt relief program was intended to avoid."

In its latest filing, the Justice Department asks an appeals court to lift a decision from U.S. District Court Judge Mark Pittman striking down Biden’s plan. Pittman, who was appointed by former President Donald Trump and is based in Fort Worth, Texas, ruled last week that Biden's plan oversteps his presidential authority and usurps Congress' powers to make laws.

It stemmed from a lawsuit brought by two borrowers who are not eligible for relief under the parameters of Biden’s plan. The program was separately halted by a St. Louis court after six Republican-led states said it would harm financial institutions.

Almost 26 million people already have applied for the relief, with 16 million approved, but the Education Department stopped accepting and processing applications last week after the plan was ruled illegal.

Biden’s plan has drawn a flurry of legal challenges, which have seen mixed results. Opponents of debt forgiveness have asked the Supreme Court to intervene at least twice after their cases failed in lower courts. The Supreme Court rejected both requests.

The barrage of lawsuits has thrown Biden’s plan, which was meant to deliver a major campaign promise, into jeopardy. It’s now uncertain whether 40 million borrowers who were promised debt relief will have to start making payments on that debt in January.

The biggest risk is for 18 million borrowers who were told their entire loan balance would be canceled. Even if payments restart, those borrowers might think they’re in the clear and ignore the bills, the Education Department has warned.

Borrowers who fall behind on payments can face heavy consequences, including damage to their credit scores and the withholding of wages and tax refunds.

Advocates and some Democrats in Congress are pressuring Biden to extend the payment pause until all legal challenges are resolved, despite his previous assurance that the freeze would end after Dec. 31.

In a Tuesday filing, the Education Department said it’s "examining all available options." But it warned that extending the pause could cost the federal government "several billion dollars a month in unrecovered loan revenue."

The freeze already has cost the federal government more than $100 billion in revenue, according to a July report by the Government Accountability Office. Critics caution that another extension could worsen inflation and increase the risk of economic recession.

In a separate action targeting student debt, the Education and Justice departments announced a new policy aiming to make it easier for borrowers to get student loans canceled in bankruptcy court.

When borrowers in bankruptcy try to get their federal student loans canceled, lawyers for the government have typically moved to block it.

Advocates have long complained that only a tiny fraction of borrowers in bankruptcy succeed in getting their student loans erased, and many lawyers won't even take those cases on. As a presidential candidate, Biden promised to fix the problem.

The Justice Department on Thursday sent new guidance to its attorneys clarifying when they can support a borrower's request for student debt forgiveness. Judges still have the final say, but the department said its guidance will lead to "fairer, more consistent results."

Separately, a federal judge on Wednesday approved an Education Department settlement that will cancel $6 billion in student debt for borrowers who say they were defrauded by for-profit colleges. The deal was proposed in June but was delayed amid a challenge by several schools.

A federal judge in San Francisco concluded that the settlement is fair. Advocates and the Biden administration applauded the approval, while a for-profit college industry group promised to appeal the decision.

Under the settlement, the Education Department agreed to cancel loans for about 200,000 borrowers who went to one of more than 150 for-profit colleges and later applied for cancellation because of misconduct by their schools.

It stems from a 2019 lawsuit accusing the Trump administration of intentionally stalling the loan relief program while it rewrote the rules.

The Associated Press education team receives support from the Carnegie Corporation of New York. The AP is solely responsible for all content.