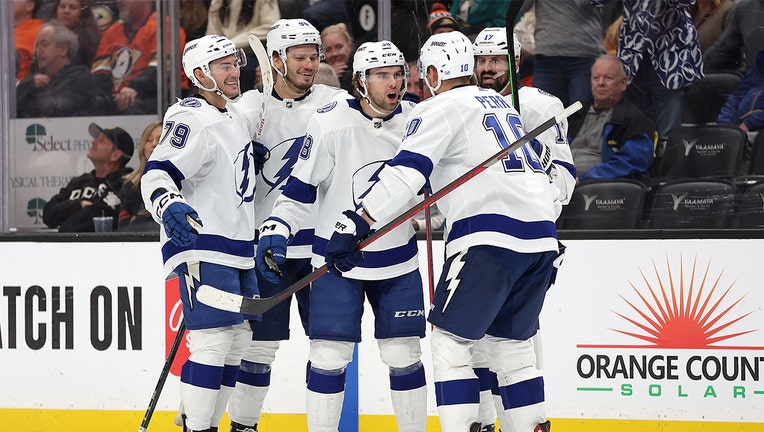 ANAHEIM, CALIFORNIA - OCTOBER 26: Corey Perry #10, Ross Colton #79, Mikhail Sergachev #98, and Alex Killorn #17congratulate Brandon Hagel #38 of the Tampa Bay Lightning after his goal during the third period of a game against the Anaheim Ducks at Hon

ANAHEIM, Calif. - Brandon Hagel scored the tiebreaking power-play goal with 4:27 to play in the Tampa Bay Lightning’s 4-2 victory over the Anaheim Ducks on Wednesday night.

"It was tough, (because) there’s not a lot of flow on my end," Elliott said. "They got a lucky break in the second (period) to tie it, and then we’re in a battle."

Hagel scored a goal in his third consecutive game for the Lightning when he fired a shot past Corey Perry’s screen and over the glove of John Gibson, who stopped 26 shots in rebuilding Anaheim’s sixth consecutive loss (0-5-1) since a season-opening win over Seattle.

"Felt good. I don’t think I’ve had a game-winner in a while," Hagel said. "When I got the puck, the defenseman was really low and I was able to walk in. Perrs did an unbelievable job screening."

Troy Terry had a goal and an assist for the Ducks, and Trevor Zegras scored his fourth goal as the Ducks returned from an 0-4-1 road trip with another loss. Terry and Zegras both also took high-sticking penalties in the third period.

"That’s an elite team," Anaheim coach Dallas Eakins said. "They’re multiple champions for a reason, and they don’t need you to make five mistakes to score a goal. They just need you to make one. It’s amazing to watch how they play. They’re rattled by nothing. ... It’s a good team to play and learn those lessons."

Zegras put the Ducks ahead late in the first period with a vicious one-timer on a pass from Dmitry Kulikov. But Sergachev evened it later in the first with a wrist shot through traffic, and Kucherov claimed the lead for Tampa Bay 1:26 after that with a one-timer off a clever cross-ice pass from Hedman.

Anaheim struggled for shots on goal and mere possession throughout the first two periods, yet Terry still tied it late in the second when he stole the puck from Philippe Myers in the circle and whipped a quick shot for his fourth goal.

The Ducks went scoreless on two power play opportunities, stretching their drought to 0 for 19 since the season opener, yet Eakins saw improvement.

Anaheim F Pavol Regenda and D Nathan Beaulieu were healthy scratches, with Brett Leason and Simon Benoit drawing in. Regenda has two assists in five games after surprisingly making the Ducks’ roster out of training camp.

Perry returned to Honda Center for his fourth career game against the Ducks. The 2011 NHL MVP spent his first 14 seasons in Anaheim, winning a Stanley Cup ring in 2007. He is second in franchise history with 372 goals and 988 career games, and he is the Ducks’ career penalty minutes leader with 1,110.

Lightning: At Sharks on Saturday.

Ducks: At Golden Knights on Friday.