BRANDON, Fla. - A neighborhood's plans for the Fourth of July aren't going over well with bird advocates. Residents of Twin Lakes in Brandon are planning to shoot off fireworks by Lake Michaela, but the area is a nesting site for birds and, therefore, protected by federal law.

If any of the birds are killed because of the fireworks, the Florida Fish and Wildlife Conservation Commission could pursue charges. Right now, many are nesting, and the fireworks could be detrimental to that process, so advocates are asking residents to keep them at home.

"We don't have nearly the same number of different species that we normally have so, protecting what we have is real important," Twin Lakes resident Tricia Pierce said.

It's why Pierce reached out to FWC when she heard her neighbors were planning to shoot off fireworks around the lake on the Fourth of July.

"It's going to be like a bomb going off and they're going to be terrified and what happens is. They usually don't fly really fast and, in a panic at night, they're at risk of flying into trees, flying into buildings, flying into powerlines," Clearwater Audubon Association vice president Kim Begay said.

The event isn't being put on by the homeowner's association, but a board member acting as a private citizen organized the event. 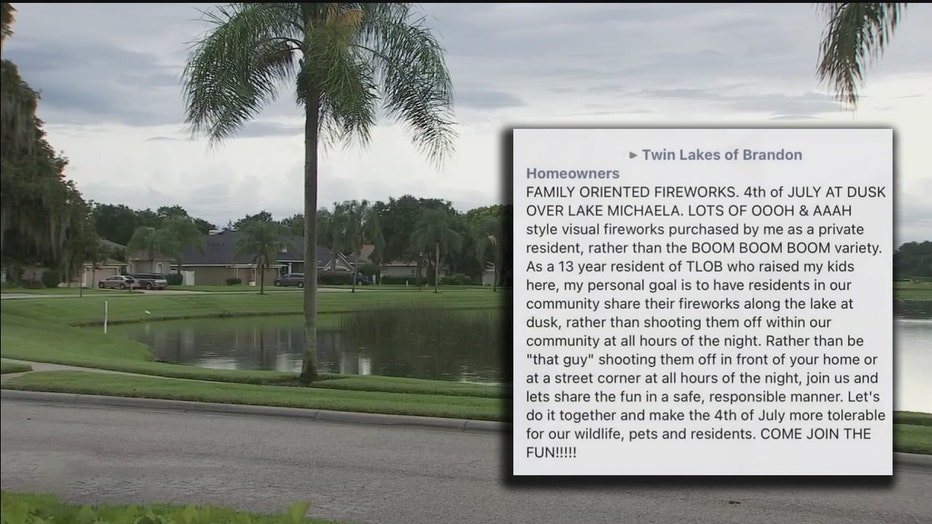 In a post in the homeowner's association's Facebook group, he writes in part, "Let's do it together and make the 4th of July more tolerable for our wildlife."

Begay says it'll do just the opposite.

"They're so scared that their heart rate gets really high and they start breathing really hard and they die 5 to 10 minutes later," Begay said.

The head biologist at FWC responded in a letter, warning residents fireworks could be in violation of federal law.

"There is a possibility of violating the Migratory Bird Treaty Act if activities incidentally cause the death of the chicks in the nest," the biologist writes in the letter.

"Our federal government wouldn't have these laws in place if they didn't feel it was really important," Begay said.

Pierce is hopeful residents will consider the wildlife they're putting at risk before they decide to light that wick.

"Yes, we want to celebrate. Yes, we want to have the community come together, but there are ways we can do that to ensure the safety of all," Pierce said.

FOX 13 made multiple attempts to get in touch with the Twin Lakes Homeowner's Association, but as of Thursday night, has not heard back.