KYIV, Ukraine - One week after Jeff Patton, of Citrus County, went to Ukraine to get married, Russia invaded the country. Though he and his new bride were able to escape to Poland, getting home to the U.S. has become what he calls a "bureaucratic disaster."

"It just kept blossoming into the thought of meeting and even entertaining the idea of getting married," Patton stated.

On February 9, he flew to Kyiv.

"Yes, he proposed to me," Skrynchenko said. "I said yes."

On February 17, they were married, but as tensions rose, Patton's flight home was canceled and Russia invaded Ukraine on Feb. 24.

"That night, we woke up with the bombing and shelling going on. We could hear it in the distance," Patton said.

The newlyweds, and her 27-year-old son with severe muscular dystrophy, grabbed documents and medication and went searching for safety.

"When we got into the gas station, literally as we pulled up to the pump, they started screaming, 'run'," Patton commented. "And we could hear the mortar fire coming in. It was very close."

They also witnessed attempts to bring teens and young men back to fight the war following the order. 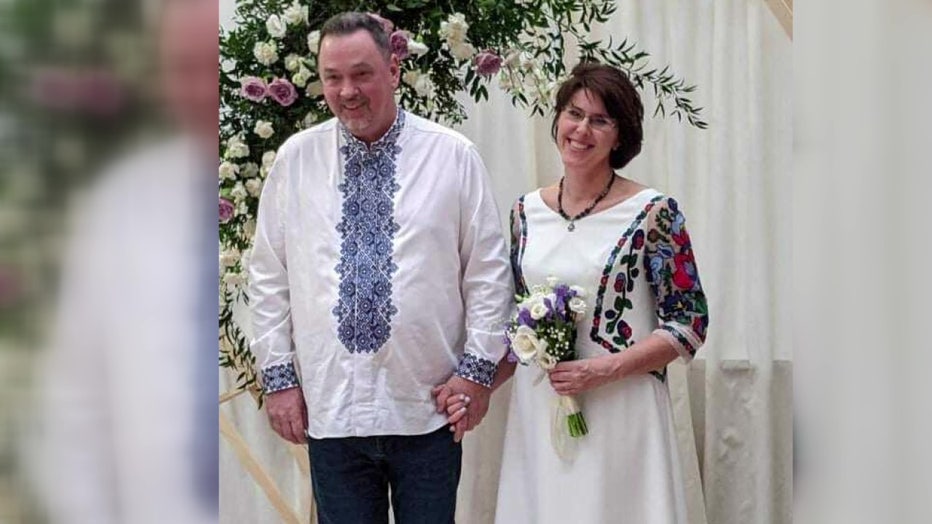 "The car in front of us had a little boy, 16 or 17 years old," Patton said. "They had taken him out of the car, they were going to put him on a bus and send him back as a soldier to a battlefield. The mother was wailing and pleading and begging. It was extremely difficult to watch. Finally, they just kind of relented and let her go."

After almost 500 miles, they made it safely to Warsaw, Poland.

"A great relief. I thought about kissing the ground," Patton said.

But they face yet another battle-getting home. The original plan was for Patton to fly back to Florida, handling immigration paperwork for Olena and her son. Now, they're scrambling for documents, weeding through red tape at the U.S. Embassy, in hopes of getting them refugee status.

"We've been pleading for help for the last two or three days because of her son's medical condition," Patton said. "I'm staring at a giant and I don't know how to move past him."

Through the toughest moments, Patton and Skrynchenko say they've never felt fear. The two ordained ministers and are relying on faith to get through.

"I believe unequivocally there's no way we would be here even giving an interview had the Lord not gone before us," Patton said. "It's kind of like we were telling the Lord when we were praying, that we're going to make plans, but we want you to guide every step. And we felt like every step we made, God had like, stepped before us."

Patton has been in contact with Senator Marco Rubio and Congressman Daniel Webster's offices in hopes of speeding up the process. Once the whole family does make it to Florida, they hope to travel back to Ukraine to do ministerial work. That was their original plan before the war started.