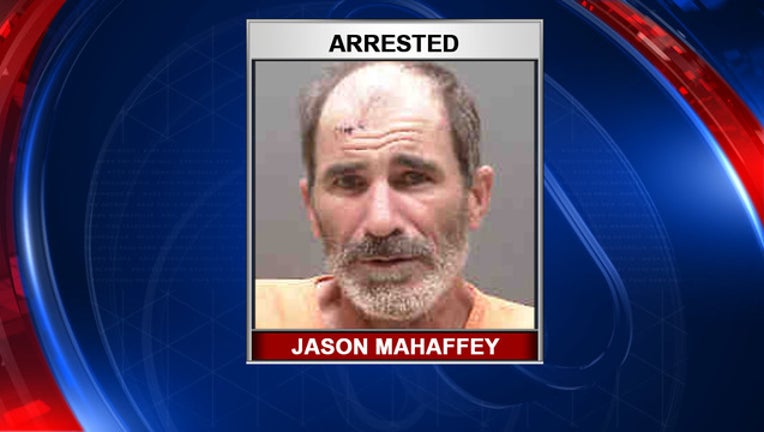 SARASOTA, Fla. (FOX 13) - A Sarasota man was arrested Tuesday after a civilian caught him trying to break into parked cars.

Police said that the 69-year-old victim witnessed Jason Mahaffey, 45, trying to break into vehicles in the parking lot located at 1391 Boulevard of the Arts.

According to Sarasota police, Mahaffey punched the victim in the face when he tried to stop him from entering an unoccupied vehicle. Mahaffey fled the scene and tried to break into vehicles at another parking lot.

Police responded to another call where Mahaffey was accused of stealing tools out of a truck parked at 1300 Blvd of the Arts.

Police said as they were detaining Mahaffey, he tried to slip a crack pipe out of his back pocket and had multiple cold Four Lokos in his backpack. They said Mahaffey was angry and told police officers his name was Ryan Mahaffey, which is the name of his brother.

While at the Sarasota County jail, police were able to find Mahaffey's real identification. When police confronted him about the false identification, Mahaffey became "enraged," according to his arrest affidavit.

He told the arresting police officer "I'm going to stomp your [expletive] teeth in." He continued to tell the police officer that he would be looking for him once he was released, officials said.

According to police, Sarasota County deputies placed him in a restraining chair.

He was charged with possession of drug paraphernalia, battery of a person 65 or older, providing false name while detained, and burglary of an unoccupied vehicle.