It’s not the racy content of the video that has provoked Baskin’s ire, but the use of superimposed big cats that’s warranted a statement from the impassioned conservationist, a TMZ report revealed.

Baskin shared that she is concerned the music video glamorizes big cat ownership for the rich and could inspire impressionable fans to dabble in the exotic pet market, which doesn’t always have a happy ending from what she’s seen in her line of work.

Some big cats end up dying in custody or being given away to sanctuaries or breeding mills, Baskin explained in a statement provided to Fox News.

“No matter how you cut it, it's always abusive to the cat and dangerous to the public,” she wrote.

In the 4-minute and 12-second “WAP” video, there are brief snippets of what appears to be orange and white tigers, as well as leopards, walking or posing. However, the cats don't appear to actually have been on the set. Baskin shared that she is relieved the exotic cats don’t seem to be present in the room with the two rappers.

“That being said, you have to pose a wildcat in front of a green screen to get that image and that doesn't happen in the wild,” Baskin wrote. “It can't happen in sanctuaries like ours where cats have plenty of room to avoid a green screen (or would shred it if offered access and could die from ingesting it). That tells me they probably dealt with one of the big cat pimps, probably even one of the ones shown in ‘Tiger King, Murder, Mayhem and Madness,’ who makes a living from beating, shocking and starving cats to make them stand on cue in front of a green screen in a studio. That's never good for the cat.” 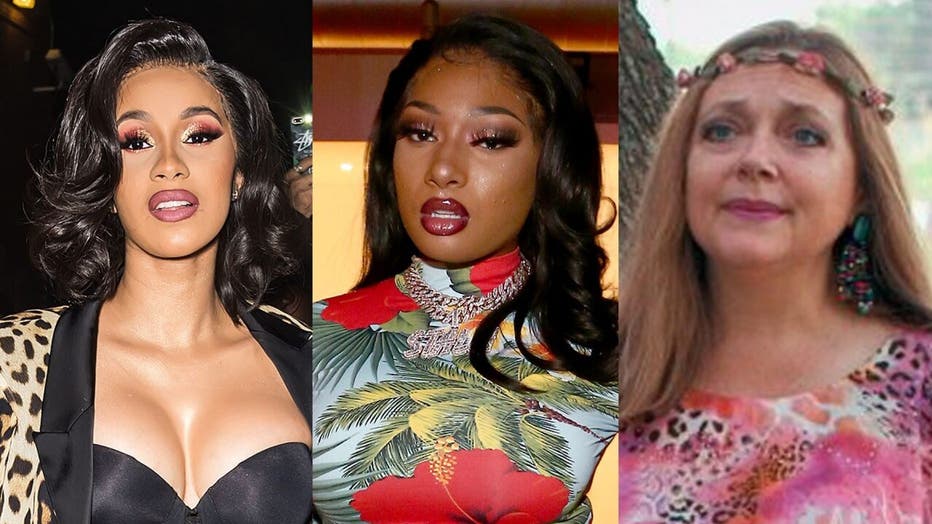 Cardi B and Megan Thee Stallion were called out by 'Tiger King' star Carole Baskin over their new 'WAP' music video. (Getty Images/Netflix)

Currently, there is no evidence of animal abuse related to the music video. Nor is there notable conservation advocacy for the snakes used in the video.

Neither representatives for Cardi B nor Megan Thee Stallion immediately responded to Fox News' request for comment.

It’s also not the first time big cats have been used in a rap video. Cardi B in particular had a cheetah in her 2017 hit, “Bodak Yellow,” and was reportedly attacked by the animal in Dubai, according to the video’s director Picture Perfect via Genius – a music news and lyrical annotation website.

The 27-year-old rapper is also a supporter of Joe Exotic, aka the Tiger King, who is currently serving a 22-year prison sentence for the attempted murder of Baskin. She tweeted out in March that she would start a GoFundMe to free Joe Exotic, but later walked back her statements claiming she was only joking.