Some residents woke up to find their carports and Florida rooms destroyed.

It was a Christmas morning unlike any other for Ranchero Village resident Trina Hoakes.

"It sucks and it's going to be inconvenient and expensive to fix the Florida room and the roof, but none of us got hurt," Hoakes said.

"All of the sudden, I saw a flash. I saw the lights flicker and then I heard the noise. It sounded like a locomotive coming through. And I said get on the floor and I grabbed my granddaughter and my mother," Hoakes said. 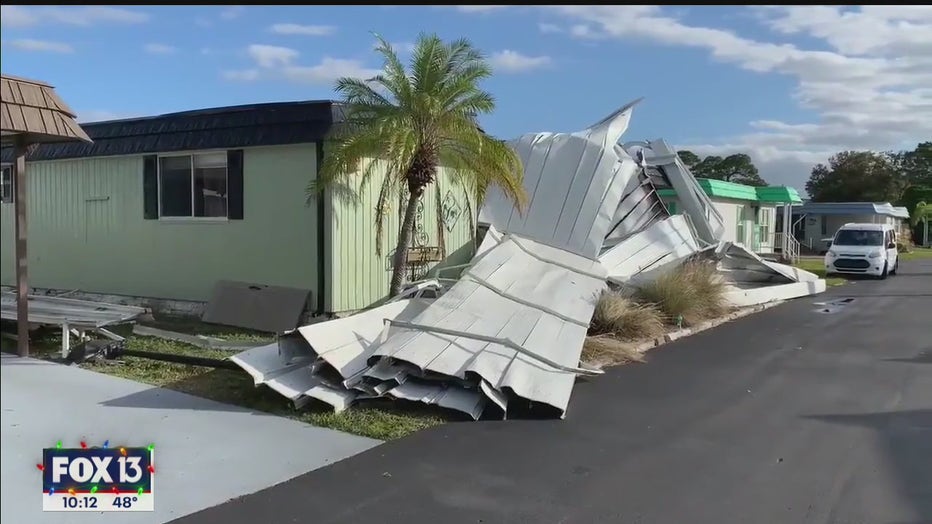 Power winds ripped off the walls of Hoakes' Florida room and also damaged her roof. According to the National Weather Service, straight-line wind gusts were recorded at up to 61 miles per hour.

Just down the street, strong wind gusts ripped off the roof of a home, throwing it across the street onto another home.

"She was in the house and she was closing her windows and it sort of just sucked everything in. She laid down on her floor and I have my neighbors roof and we think a carport on my house," O'Rouke said.

Her neighbor's roof completely covers the front side of her home.

O'Rouke, who was at a Christmas Party at the time, says she was relieved when she came home to find her dogs safe and the inside of her home intact.

"Everybody was safe. No one was hurt in the park. There were a few houses that were damaged, but nobody was hurt so I'm thankful," O'Rouke said.