Clearwater city council unanimously voted to extend the contract with REDFLEX through October 30, 2024 at two intersections the chief of police says are the city's most dangerous.

CLEARWATER, Fla. - Red light cameras will remain in Clearwater through 2024.

Clearwater City Council unanimously voted to extend the contract with REDFLEX through October 30, 2024. The cameras are installed at Gulf to Bay Boulevard and Belcher Road and Chestnut and Fort Harrison.

Gulf to Bay is the intersection where officers said a driver ran the red light five separate times in two weeks earlier this year. Clearwater Police Chief Daniel Slaughter called them two of the most dangerous intersections in the city.

“When you look at the data, 99.9% of the people are following the law and stopping and 0.01% of people are not,” said Slaughter.

“It’s really hard to make a correlation between accidents and causation, so I’m really cautious with that data because we’ve seen crashes go up and down at that intersection,” said Slaughter.

But some opponents claim the program is a money grab. 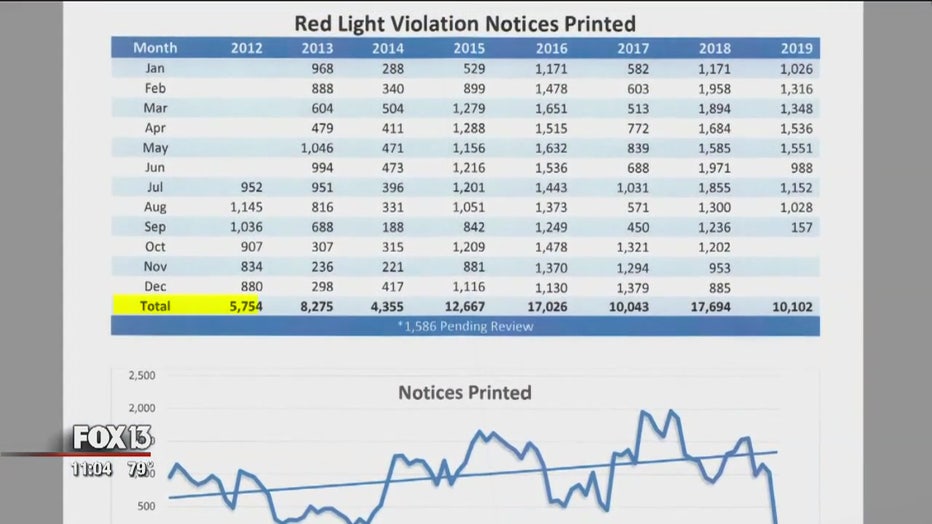 “You don’t see those safety improvements happening in the city of Clearwater. They installed those cameras that just sit there as a silent sentinel and collect money to send to city hall,” said Axl David, a red light camera opponent who spoke to city council.

While the city made roughly $3 million over the last seven years using the enforcement tool, police said they don’t police for profit.

“I think that when you have fines, all that stuff’s happening. You can make the same argument about traffic tickets. Should we stop writing traffic tickets because there’s revenue that comes in?” said the police chief.

Slaughter and several of the council members said they believe the red light cameras hold people accountable to not be tempted to run the red light. The punishment for running a red light at those Clearwater intersections is a $158 fine.