A curious giant sunfish floated up to a paddleboarder near Laguna Beach, California, to take a closer look at the human visitor. (Credit: Rich German via Storyful)

A curious sunfish floated near some paddleboarders near Laguna Beach in California on Dec. 2.

Video captured the close encounter between Rich German and Matthew Wheaton while they were standing on their paddleboards.

"That might be the biggest sunfish that I’ve ever seen. It’s as big as your board," German says to Wheaton as the fish floats by.

In the video, Wheaton kneels down on his board to get a closer look at the giant fish. 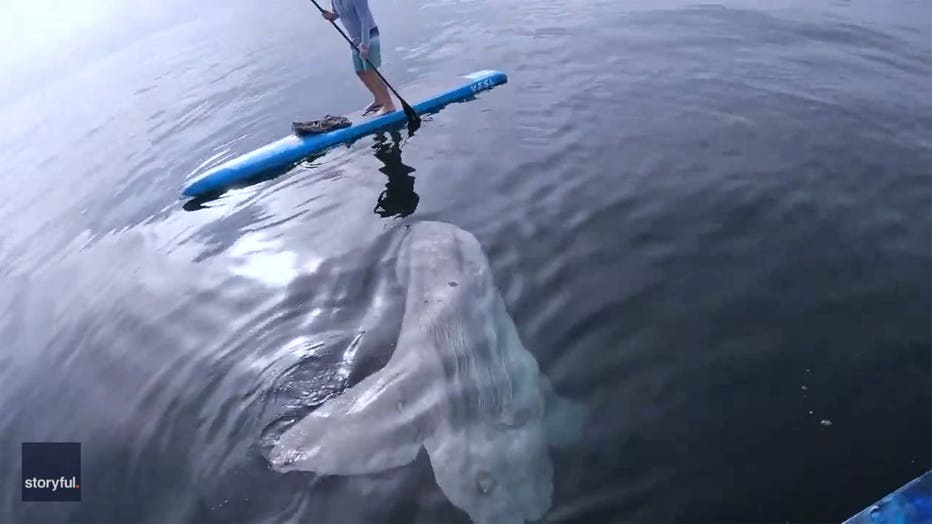 Freeze frame of video showing a sunfish swimming near some paddleboarders near Laguna Beach, Calif.

"Always fun to witness one of these interesting creatures. Holy mola mola!" German wrote on his Instagram post that featured the video.

German estimated the sunfish was up to nine feet in size.

Sunfish, also known by its scientific name, Mola mola, can grow up to 11 feet in length and can weigh nearly 5,000 pounds, according to National Geographic.

Sunfish are known to be clumsy swimmers and love to eat jellyfish. They are naturally curious creatures and are eager to approach divers and other humans who decide to swim into their natural habitat.

The Mola mola is considered a vulnerable species as they are often caught in nets and are known to suffocate after eating plastic bags since they resemble jellyfish, according to National Geographic.