ST. PETERSBURG, Fla. - The mayor of St. Pete is calling on Florida's governor to help address the red tide emergency along the city's shores as city employees work daily to remove large amounts of dead fish. So far, the city has collected about 500 tons of dead sea life.

Mayor Rick Kriseman said all of the city's resources have been focused on the massive fish kill. In many cases, the larger fish have to be removed one by one. Not long before the mayor made his plea, a goliath grouper was found a Lassing Park, and another grouper was seen at Crisp Park. 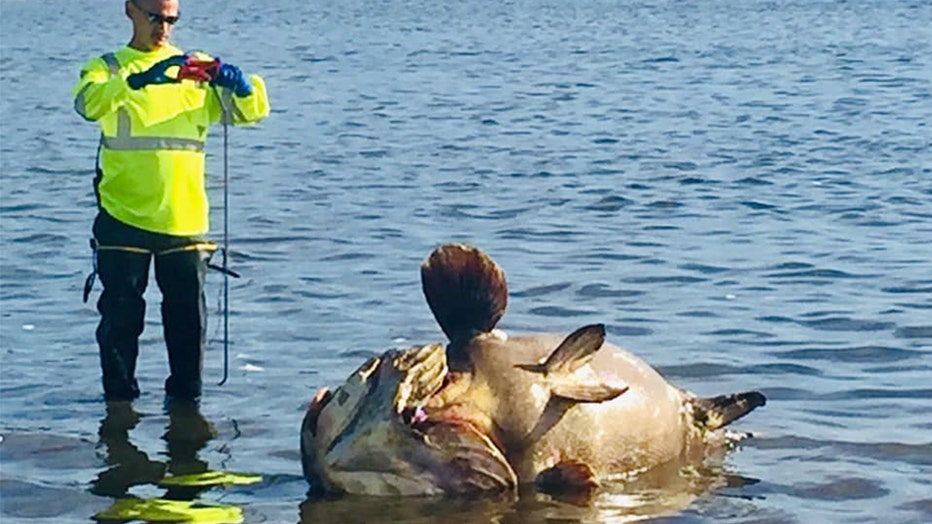 The second grouper, weighing 400 pounds, was removed with a backhoe on Wednesday morning.

Kriseman said his office, council, and their lobbyists have all reached out to Gov. Ron DeSantis but have yet to receive a response. He is requesting the governor to declare a state of emergency, which will free up more money to deal with the fish kill.

As of Tuesday, 614 tons of dead fish had been collected by the county, including 477 tons in St. Petersburg. Anyone who wants to pitch in with the cleanup can drop fish off in dumpsters at seven sites.

"We are asking the governor, please, Pinellas County, St. Petersburg, we need your help," he said during Wednesday's news conference. "This isn't about politics. I know the governor has had a lot to juggle lately, but we need his office to be paying attention to this. Even Rick Scott, when he was governor, declared a state of emergency related to red tide, sent resources down here. More help is needed if we're going to get this fish out of the water." 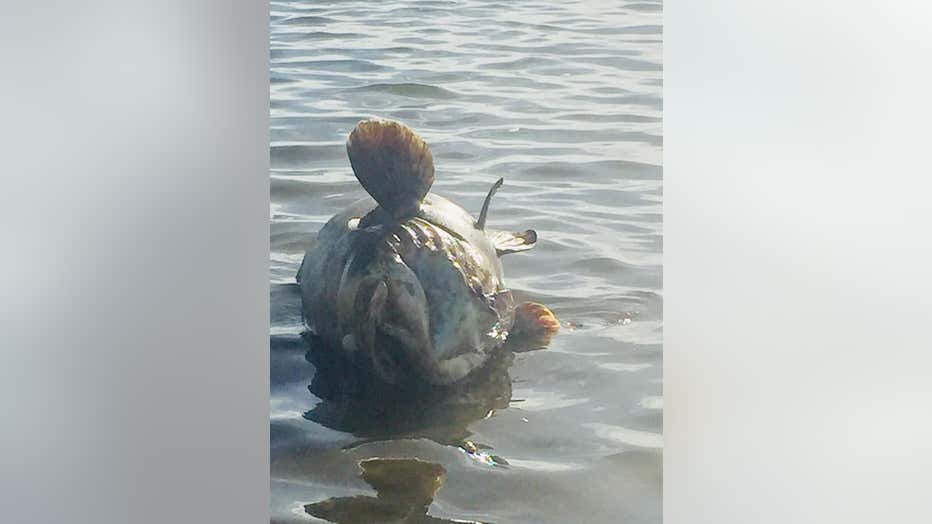 Cleanup crews have been clearing dead marine life from Tampa Bay waterways on a daily basis but they can’t keep up with the devastation caused by this summer’s early red tide bloom. On Tuesday, SkyFOX captured images of miles and miles of dead fish and marine life littering Tampa Bay on both the Pinellas and Hillsborough sides.

Neighbors in St. Pete say they’ve never experienced anything quite as bad as this summer’s bloom.

"I've never seen one dead fish as far up in the bay as they are now. And now my canal is 100% littered with dead fish," said St. Petersburg resident Gene Kent.

City officials are reminding everyone they will not be entering private property. Their recommendation is to double-bag the collected fish and place them in a solid waste container. They said there is also dumpsters at several parks.

Video captured by See Through Canoe showed two manatees swim through red tide. State wildlife officials said manatees are dying at an alarming rate this year. They said boat strikes and red tide were the leading cause of manatee deaths in the Tampa Bay area.

Two manatees appeared in Tampa Bay off of St. Petersburg as red tide continues to plague the city, and the stench and dead fish overwhelms locals.

Tuesday, dozens of neighbors and business owners met with officials to talk about what can be done and the clean-up efforts that’ve been taking place for more than a month now. Since June 11, crews in Pinellas have removed more than 614 tons of dead marine life from the waterways and shores.

"Kind of what we’re seeing is this sloshing action. You’ve got this very intense bloom sitting right there in the middle and lower part of the bay and, when you look at the tidal flushing model that USF has on their website, you can just kind of see it going back and forth and back and forth," explained Pinellas County Public Works director Kelli Levy. "We really aren’t getting the bay completely flushed out."

The problem has the attention of state officials. Florida Fish and Wildlife officials say it has toured the area with the Department of Environmental Protection and are in the process of executing grant agreements to help Pinellas and Hillsborough with cleanup and red tide mitigation. Hard-hit local tourism and fishing businesses are especially eager to find out when and if relief money could be headed their way.

The FWC and DEP are set to meet again today to discuss the next steps in helping the Bay Area.