TAMPA, Fla. - Red tide is nothing new to Florida, and while the bloom that we’re seeing in 2021 is not yet as bad as the one we experienced in 2018 – which is widely considered to be among the worst in recent memory – the current bloom could still be a big problem for those who live and work along the shore.

Photos of dead marine life and cloudy water are flooding many social media users’ feeds. But so is a lot of misinformation.  Here are the basics about red tide, based on what experts at Mote Marine Lab and the Florida Fish & Wildlife Conservation Commission have said.

Q: What is red tide?

A: It is a higher-than-normal concentration of microscopic algae. When it forms off the Gulf Coast of Florida, the specific culprit is a microorganism called Karenia brevis.

A: It can discolor affected water, sometimes (but not always) making it look brownish-red.

Q: How does it kill marine life and make people sick?

Karenia brevis produces brevetoxins. It can kill marine life at the lower end of the food chain, and poison shellfish and seagrass, which in turn sickens those who consume it). Brevetoxins can also seep into the air, sickening wildlife and people who breathe it. People with pre-existing breathing conditions are at the highest risk of having adverse reactions to exposure.

The history of red tide in Florida

A: No. There are accounts of red tide off the Florida coast for hundreds of years, long before Florida became commercially developed.

Q: How long can it last?

A: Weeks, months, and sometimes more than a year. Florida suffered through nearly a year and a half of red tide outbreaks from 2004 to 2006.

Q: What causes the blooms to grow and spread?

A: Naturally existing Karenia brevis feed off a variety of nutrients. When there are higher levels of nutrients, they can explode into a bloom that can be spread by currents and wind patterns. These nutrients can include fertilizer runoff pollution. 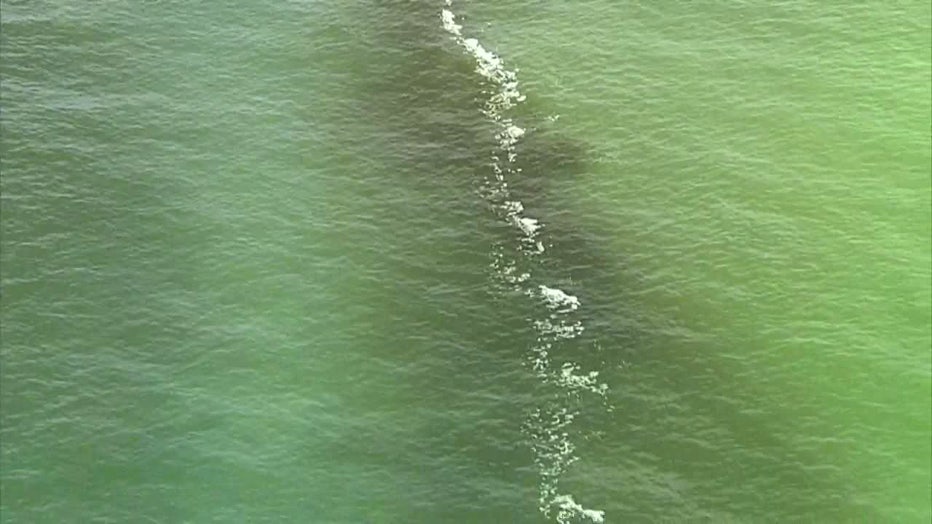 Q: Is this connected to the Piney Point wastewater dump?

A: While red tide does feed on nutrients like those found in wastewater at the old phosphate plant, scientists have not formally linked the spill to the blooms along the Pinellas coast, which began before the Piney Point dump. They have seen red tide blooms and fish kills in Tampa Bay, closer to the site of the spill, and they are continuing to study all of the blooms for evidence of any link.

Q: Is this the same organism that has caused green slime inland, in places like South Florida’s Lake Okeechobee?

A: No. The blue-green algae blooms in Lake Okeechobee are caused by cyanobacteria, not Karenia brevis. Cyanobacteria expand in heat and also feeds off of pollution from nitrogen and phosphorus-based fertilizer. It can also cause health problems and researchers believe long-term exposure may be linked to serious conditions, including Alzheimer’s and ALS.